Published: 5.8.2011
This community, situated in a valley of Židovka-torrent, in an altitude of 460 metres above sea level, is surrounded with afforested hills and beautiful countryside. Machovska Lhota/ Ostra Gora frontier crossboard is distant only 2,4 kilometres. Machov is tourist, skiers' as well as cyclists' target. The hills and mountains are always within easy reach.

Machov Market –Town is consisted of four quarters, such as: Nízké Srbské, Machov, Machovska Lhota and Bělá (in past, all localities were independent communities). At present, the community has totally 1100 inhabitants. Machov is placed at south-east edge of Broumov Headland, where state border divides East Bohemia from Polish Klodzko Region.

Many residences of Broumov type, in a form of carpentered houses from 18th-19th centuries belong to important historical monuments. Local St. Wenceslas Baroque Church was substituted (in 1975) by original, wooden one, constructed probably according to project of Martin Allia. On the square, Virgin Mary Baroque column (with two escutcheons of 1761) is worth to be mentioned. In Machovska Lhota, brick-built building of Kubeček Parsonage (1813) is situated. Here, lifted chamber, placed on pillars (it is remarkable element of this house) is to be found. In Bělá-quarter, birthplace of Charles Dostál, „Farmer´s General“, his native house could be seen. Further, original carpentered forge of 1799, is located in Nízká Srbská (these spaces served for film decorations of TV-serie F. L. Věk). Former Evangelic Parsonage of 1813, which served as Bohemian Brethren house of prayer, is to be found in Machovska Lhota. Tourist marked cycling trails lead you to all monuments, described above. 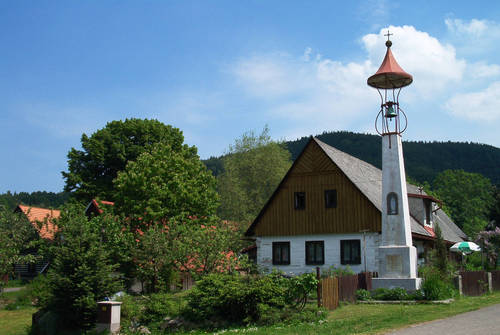 The oldest written message about Machov comes of 1354. The name „Machov“ is mentioned in text of Latin document. This name was created from old-Bohemian title „Mach“ (it is shortened form of Mathew, Christian name). In the middle of 14th century, Machov was, including its environs, in possession of Adersbach Parentage. Before Hussite wars, Machov is mentioned as a village but within 15th century, Jan Machowsky of Adersbach, got a status of small town for this locality. In 1634, the area fell to a share, together with Náchod, to Octavious Piccolomini. He held his rule to his subject in very cruel and merciless way, similarly as it did the whole Parentage. A dissatisfaction with a rule of Adersbach Parentage culminated with big farmers´ riot, led (in Machov and Police) by Charles Dostál from Lhota, popular „Farmer´s General“. Even Vaclav Foglar, pursuing and traffic pilot, is a native from this community. He was an important fighter against Germans in the 2nd World War, in services of British Air Forces.

At present, several companies are active in Machov. In factory complex, situated at the exit from the community in direction to Bělá, there is a seat of four companies, such as: Papillons (textile production), Kotexma (international company), Ekomach (a company with a proprietor from Switzerland) and Hofman (a company, producing kitchen sets). Alois Jirásek, famous writer, made Machov immortal in his works.

Machov is placed in an area, very attractive from tourist point of view. If you decide to visit Giant Mountains or Orlické Mountains during winter or summer saison, you always find enough possibilities for tourist, cyclist or skier activities. So, ski centre in Klodsko border land offers many ski-descend routes for adults as well as for children. The surrounding countryside is crossed with well arranged ski routes. Two border crossings to Poland are open for tourists all year round. The area of Broumov Sandstone Walls is an excellent locality for mountain climbers. As a dominanta, it is Hejšovina (911 m, the highest so called table hill of Central Europe) and Bor Hill Range, offering marvellous outlook to panorama of near Giant Mountains. Another excursion possibility is offered by means of cycling route, total lenght of 29 kms. Its start is in Machov, leading to Ratibořice Castle in Babička (Grandmother) Valley. Dobrošov, artillery stronghold, was constructed as a consequence of Adolf Hitler election as German Chancellor. You can get there, following 21 kilometres long tourist education trail. This artillery citadel belonged to main defence points of Czechoslovak fortification along north Czechoslovakian border. Another cycling route, 6,8 kilometres long, (middle difficulty stage) has its end in the town of Police nad Metují . In general, Machov is living with full cultural and social life. Various races and competitions are organized there, so, for instance, races or walkings, in winter ski races in different disciples. The competitions, irrespective of the age of their participants, are taken place there regularly each year.