Published: 24.4.2008
The Castle of Kost is situated in Bohemian Paradise, 4 kms distant of small town of Sobotka. It is rather speciality between Bohemian castles, because it is placed in plain, not on hill.

According to historical notices, Kost castle was founded by Beneš of Wartenberg bef

ore 1349. This Gothic castle was constructed on powerful but not high sandstone headland, surrounded with three marsh valleys. Beneš took these marshes in such way that on its place let built ponds (White, Black and Swan Ponds), and it was possible to let out, if necessary. The water inundated later the valley and casual invaders had no chance to enter. In 1370, Peter of Wartenberg let  rebuilt the castle. Later, the castle was in ownership of Zajíc of Hasenburg Parentage, and in 1497 cane Šelmberg Family, they built Šelmberg palace here. 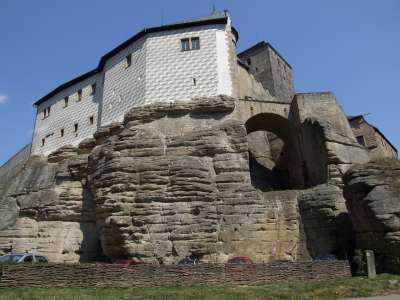 In first half of 16th century - during stay of Biberstein Family - the castle was reconstructed in Renaissance style, so the southern part with a brewery and black kitchen was added.Further

owner, Albrecht of Wallenstein, had an idea to rebuild the castle to impregnable fortress. This original plan was not realised, however, as Albrecht was murdered in Cheb in February of 1634.

After his death, the castle was visited by Emperor´s troops. During their stay, the disaster occured, as , thanks to imprudency of staff of Prince Colloredo, the castle completely burnt out. After a fire, in 1635, the castle was abandoned and let its destiny, so the building became a ruin. Later, the castle became an ownership of Lobkowitz Family. They

sold it to Hermann Černín of Chudenice in 1637. At that time, lordship found that the castle could act as some supporting point for enemies, so they decided that the castle would be demolished. Anyway, the castle was rescued, thanks to Černín´s wife, Sylvia Catarina del Caretto-Milesimo. This lady loved this place and stayed her for ceratin time-period. She proved that the Emperor´s order for castle-destruction was cancelled. Who knows how she managed this?

In 17th century, the King´s palace was rebuilt to a granary, and the rest of castle was not inhabited. However, later the castle fell to decay again, burned out again. Further reconstruction came after 2nd World War. At present, castle of Kost is in ownership of Kinský Family.

During summer season, there are taken place in castle fencing tournaments and various performances, you can even follow - with your own eyes - castle conquest. 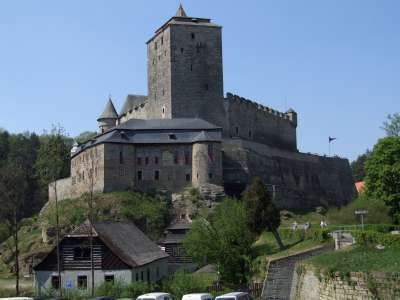 1 st tour: Kinský Family in Bohemia : is made of family picture-portraits and pictures of one of oldest Noble Parentages (50-60 min.)

April: daily, except Mondays and Tuesdays: since 9 h till 16 h.

September: daily, except Mondays: since 9 h till 17 h.

October: daily, except Mondays and Tuesdays: since 9 h till 16 h.