Other Czech town having its attribute word spa. If it wouldn´t be like this, probably nobody has an idea than here is also the place, where you can do something for your health. Spa colonnades and crispy wafers in Spa Kynžvart but look no further, this sort of entertainment doesn´t exist in the Slavkov Forest.

Rather than from dressed up spa guests, Spa Kynzvart benefit from fresh air, which is produced by  surrounding mixed forests. Stable and high humidity and also minimum of pollutants in the air is like a balmy especially for the children´s patients suffering from respiratory diseases. In Kynžvart but also treats kidney disease, urinary tract, obesity and various skin diseases. 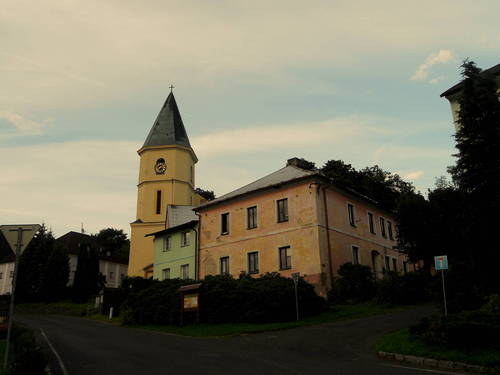 Kynžvart Spa are specialized for the children since 1950, when the epidemic of whooping cough turned out that this corner of western Bohemia just has a beneficial effect right on children. Adults just have to use only nearby Marienbad. But not just fresh air, but also four mineral springs were the reasons why was established another Czech spa, founded in the 19th century by Metternich.

Right, left or out of town?

The square gives slightly chaotic impression. The buildings what remembers a long centuries, standing next to historically insignificant. The arrow labeled "castle" leads you to nowhere. Arrow “chateau” takes you out of town, but not to chateau. When you ask the locals where you will find Kynžvart spas, you get the answer that this is a spa and all the houses has to be a spa houses.

But on the square it seems to be funny. In front of the municipality, it looks like that a local people protest against something. From their conversation but it is becoming to be clear that it did not join them the protest, but a trip to Croatia. The Spa Kynžvart with about fifteen hundred people, to the sun recreation went full bus of neighbors. When they come back, maybe they will engage in the fight for their rights and in the local library will sign a petition supporting the completion of road R6 Prague - Karlovy Vary - Cheb. 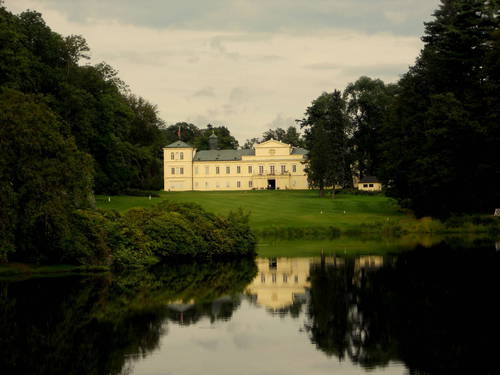 Relax on the chateau Kynzvart

While a short walk from the crowds gathered together eager to relax, a few miles away, on the Kynzvart´s chateau you can hear tones of classical music. That's where it lives. Castle building is for this festive evening, surrounded by white plastic tape and entrances bodyguards lurking.

Gently yellow building is shiny in the distance, reflected in a pond, which is in front. Completes the perfect backdrop for golf what else than a perfectly trimmed green lawn. The road leading directly to the castle around the pond, where catch fish is prohibited, surrounded by centuries-old oaks. Slavkov Forest idyll, which is credited to Philip Earl Emerch Metternich, who left built the chateau in 1690. 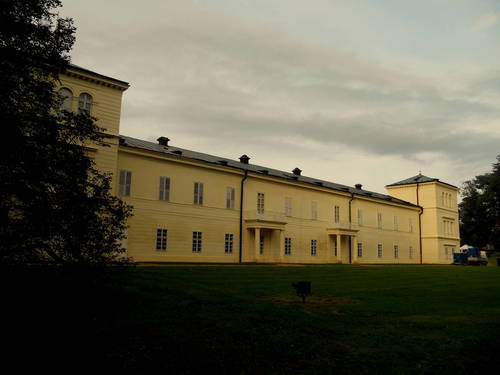 Not always in the past people could hear music and songs. In 1976 chateau was closed. Why? The reason called emergency conditions. At that time, palaces and castles just suffered. Nestled in the beautiful surrounding countryside, but the castle alone, was not so lucrative, the years it seemed will be doomed. The present form the chateau got in 2002. But brewery building, which is in the shadow of the age-old linden tree stands a few hundred meters from the castle building, is not repaired until now.

Surroundings Kynžvart Spa is a paradise for bikers. In the last few years, when cycling back into fashion, the town grew up some interesting bike routes around. We would recommend Kladská or Smraďoch (stinky), a nature reserve with many different gases.

Published: 2.3.2012
When we think of friends in which the corners of our country to go on the weekend of November slut, attacked us Doupov mountains that no one of us had ever visited. When we discussed the maps and information sources, we decided to combine this with the Czech mountains immediately adjacent Slavkov forest. There our journey begun.