This project was approved by Emperor František I. and so, this day is taken for as a foundation day of Františkovy Lázně. At present, the town is full of busy tourist as well as spa traffic. Despite the fact that Františkovy Lázně was mentioned several times in our web, I wish to inform you about notions got with my month´s stay in this town.

So, a colonnade is a main centre of all activities in the town. National Avenue is bordered with historical bath houses (with new facades) and boastful names from both parts, paved with tile-floor concrete pavements (wooden in past), full of banks, shops and gardens will bring you to some places where really a time was stopped. At its end, you can find the oldest spring - Frank Source. So, all spa guests meet there in order to take their drinking cure, and just there, the history of the town was started there. On right part, in park, you can find well-known statue of small boy, sitting on a globe, with a fish in his hands, connected with a legend, regarding miraculous contact. 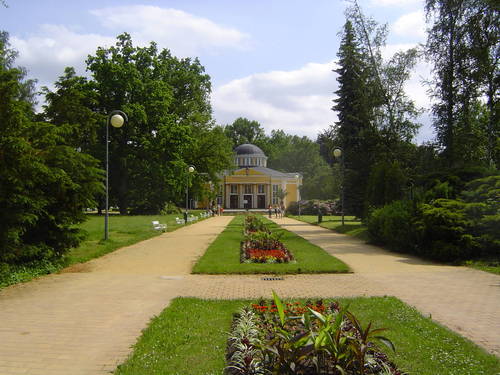 As the first building of  private spa, today´s hotel „At Three Lilies“ is taken for, and its original name was preserved till now. Just these famous mud-baths raised the place on world´s level. When entering atrium courtyard, you can admire frontal facade with sgraffitos of Cheb-painter of 1827.

After discovering of the other springs, a building in Renaissance style, in castle measures, including representative entrance pavillon and lateral bath wings, was constructed. (Emperor´s Bath-1880). This bath is specialized for mud and iron baths, and was equipped with most modern technics. Even now, the bath is able to involve complete balneologic therapy. On the other hand, central pavillon is a place where various concerts, screenings and social meetings are taken place.

However, some spa houses are closed for the time being, as various reconstruction works are effected there, in order the required high level of present time could be reached.

Spa centre is full of green. Wide and well arranged drives lead to each spring, taking a name of source or some important personality. More than twenty drinking and bath springs are available there. So, Adler Spring bears its name after Dr. Adler, spa founder. His bust has its respectable place in front of the pavillon of the same name. Regarding the second oldest spring, it is Louise Spring, named after Empress Louise The spring is situated inside garden pavillon of oval ground plan. This building belongs to most beautiful constructions of Neo-classic pavillons in Bohemia. All parks and promenades are full of variegated colours of blossomed flowers and bushes.

Leasure time could be spent not only with walking around the town and adjoined parks, or listening  to some concerts or looking at theatre, but also with getting acquiaintance of surrounding nature and places of interest, such as Soos Reservation, Butterfly Farm, forest castle and the other places. As far as sporting activities are concerned, so numerous cycling routes serve fully to this purpose. As an example, Aquaforum complex could be named (including its summer or  all-year sections), fitcentre or training halls. This rich offer of balneologic and wellness stays makes a competition to near Mariánské Lázně and Karlovy Vary. 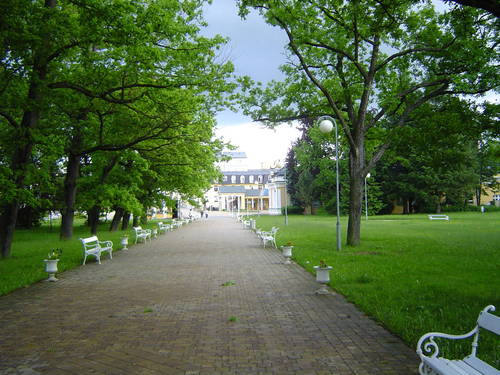 Short history of the town:

Published: 1.10.2015
In the middle of a surface mine territory and brown coal, there is an oasis of peace, a fabulous place – Bernard Homestead. Join us to remember how this place once lived, how animals were raised, and how traditional crafts were performed.

Published: 7.1.2011
The community of Bukovany has approx. 2000 inhabitants. It is situated not far from the town of Sokolov, Karlovy Vary Region, in an altitude of 440 metres above sea level. The village is surrounded, from its southern part, with mixed and pine forests, and it borders from western part, with former quarry of Libik-Medard.

Published: 14.1.2011
The community of Šabina is situated along right part of Ohře-river, very popular among watermen, Karlovy Vary Region, not far from the towns of Sokolov, Františkovy Lázně and Mariánské Lázně.