An information table, situated approx. one hundred metres from the square, leads you towards „Daliborka“ look out tower. The construction is distant a couple of kilometres from the town. However, it was closed during a period we visited it. We are sure that from the top, a nice round view to Heřmanův Městec as well as the east Labe countryside, could be offered. On the other hand, we prefer to make acquaintance the way of life of local people in detail.

Heřmanův Městec makes an impression of typical small town, where nobody is in a hurry, and everything is passing within standard rhytm. On the square, in front of shops, where St. Bartholomew Church is dominating, two old ladies are discussing about world novelties. Their ideas are cut only by somebody who is their known person passing by, or somebody, they do not know at all, but they have a need to valuate him, (his clothes or how many money he would earn). 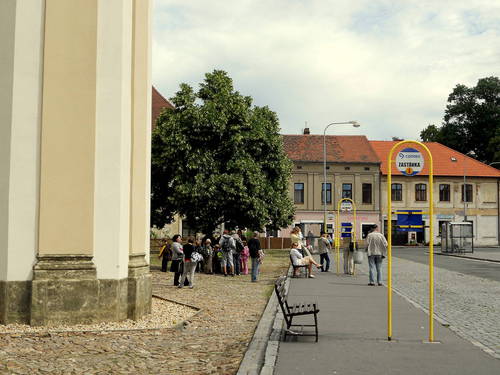 It is evident that all people in Heřmanův Městec know very well each other. They meet at bus station, when they are leaving for their jobs, or later on the square, where most of small shops are situated. Frankly speaking, a person from big city would be able to enjoy fully such atmosphere. Somebody could understand all this as stereotype or maybe, something as a tediousness, the other could find there calm oasis, subject to the fact that he was not in a hurry. The assortment as well as the equipment of most shops reminds past years. A payment by means of credit card would become an adventure, especially when your shoppings will be done in foodstuff shop, as such operation could be complicated for shop-assistant for couple of minutes.

So, such idyllic meditation about life in small locality could be suddenly interrupted by dealers of one cellular-phone company, offering their very advantageous list of rates. But a young boy, dressed in clothes with tie, was not too successfull, so, he disappeared soon from his stand close to the church. His serious sentences and literary Czech language were changed, (after several minutes´ of conversation), to common and ordinary talks.

A sign-post, placed on the square, indicates towards Jewish synagogue. However, the direction, where to go, is not stipulated quite clearly, but we managed to find it. The Jews had their seat very closely to former nobles. Since 15th century, they evidently stayed in the community of Mrdice (now, in Heřmanův Městec). Nevertheless, the suppositions regarding their presence in such locality, come to the end of 13th century.

It is evident that the Jews did not have their life easy. They were forced to struggle for their position even here along ideal line between Prague and Moravia, or berween the towns of Chrudim and Čáslav. After big fire in 1623, when original Jewish town was completely destroyed as well as prospectively expanding other culture, Jewish population started to get on better during couple of years later. 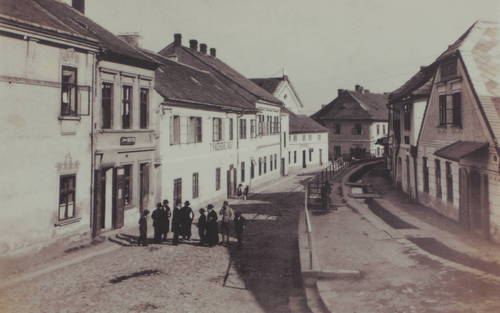 Count Spork was well disposed towards Jewish culture, so, he permitted to construct a synagogue, and the Jews had the permission to stay in one street. In 1680, the street changed into complete Jewish town with its own administration, synagogue, school building and a cemetery, the oldest one in the Czech Republic. The town, when even regional rabbi had his seat, employed its own night-watchman, policeman and a doctor.

Later, an order from Prague came, that the Jews must be isolated. So, a ghetto, bordered with a barriere from three parts, was created from this quarter. All such persons with rather uncomfortable confession, valid for authorities, had  to overcome their very hard time period. The autonomy was lost. Only the elder sons had the right to get married, and even a number of descendants was limited. During the night, the Jews were forced to stay on their stipulated territory - i.e. among three barriers.

A partial liberty came during rule of Empress Mary Therese. The laws as well as the orders were rather distant from real way of life, so the tortures of Jewish population continued practically till 1849, when the first Jews moved officially to the town, despite protests of many Christians. The community which lived together in past, started to be dispersed to neighbouring industrial localities. So, in Heřmanův Městec, approx. 15 Jewish families stayed. They co-existed together till the beginning of the 2nd World War. However, long Jewish tradition finished there, not only in Heřmanův Městec, but also in all towns and countries suffered from the war.

A Life in the Castle - Idyllic Necessity

Who would not dream about a life in the castle? But, some difference could occure in case of a castle in Heřmanův Městec. Now, this building serves as Senior Relax House. It is a dream of any old person, to have the chance to live close to relatives who love them. To tell the truth, everybody could not be so lucky. Maybe, a life in the castle would become a small substitution for a solitude of their inhabitants. 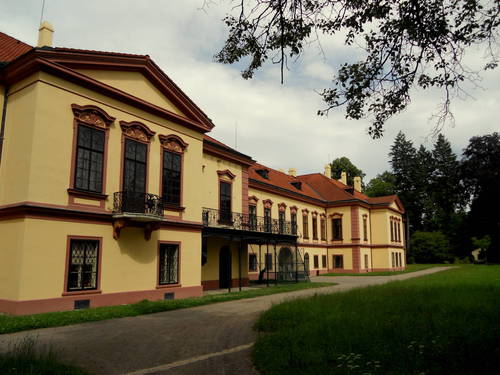 So, a life in the castle is characteristic with its special atmosphere. The entry is not allowed for everybody. The courtyard could be watched after previous permission. Behind the building, you can see a park in English style. Here you can find many trees, equipped with information plates, describing in detail all sorts. So you can be educated, walking around.

A castle with its imposant tower is situated on a place of former stronghold. Since 1591, the building started to be named as a castle, and twenty years later, all complex was completely destroyed by big fire, after interference with Emperor´s military troops. The castle got its Baroque face in 1784. Later, to actual form, the building was reconstructed early in 1933.