en.infoglobe.cz » Places of interest » CZ: Kočí - Would You Visit The Church? - VIDEO

The investigations confirmed that the Czechs belong to greatest atheists of the Europe. Despite of such fact, the church (many times in very good state) could be found nearly in every village. I heard recently a theory, regarding a theme: the Czechs and atheism, and I have to admit that this theory explained a lot of ideas.

Many theories about atheism

To tell the truth, no discussion is held about atheism itself, in the right sense of the term, but about  great aversion against institutions. We are not accustomed to follow organized matters, including organized faith. But this is one of many opinions.

The next one is looking for a reason of high percentage of persons without religion confession in Communist regime, with its intensive pressure to any powerful positions, including priests. The Communists propagated comfortably, by means of their preachings, their idea and so, the five year plans could be better fulfilled. On the other hand, another opinion shows the fact that in neighbouring Poland (which has similar destiny as Czechoslovakia) the people did not left their faith, whereas the inhabitants of Bohemia and Moravia turned away from the religion. 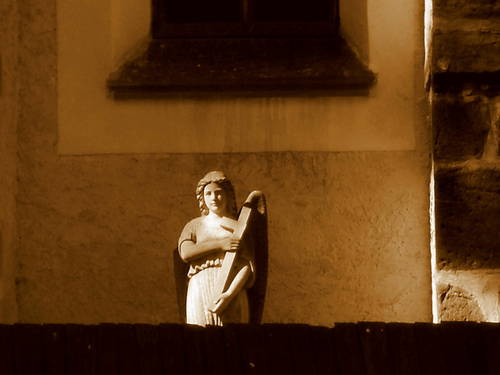 At present, we live in liberale society again. Nevertheless, just within past couple of years, we can prove that we are able to evaluate the history, the pleasant one, full of courage, or compassionate, however that may be. So, this wooden church, located in small village of Kočí, ovecame, thanks to our character, hundred years, and is, as a live memory to all past governments, hegemonies and regimes. The building remained here to prove that our society would be polite, receptive and respectful, proving that the actual or future situation would not be so bad.

St. Bartholomew Church is wooden jewel, situated in small village, where everybody knows each other. In its neighbourhood, a monument,dedicated to all dead who lost their life during the 2nd World War.

Nevertheless, the wood of the church, situated in a valley above wet area, is optically dominating material only. The church was founded in 1394 by Sophia of Bavaria, including its bell-tower. She let to put inside a bell. The entry to the church is to be done along covered wooden bridge of Baroque style, constructed obviously in 1721. The bridge belongs to one of oldest covered bridges of Europe. 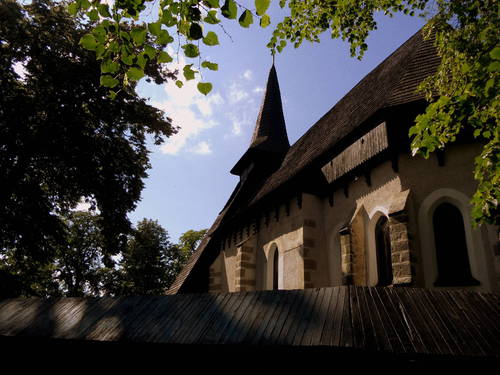 Except this covered wooden bridge, the roof of which is covered with wooden shingles, 29 metres high bell-tower is a dominanta if this church. Inside, two bells are placed - St. Bartholomew of 1496, and St. Lawrence of 1562. However, the third bell disappeared from there in the course of the 2nd World War. It was molten and served for peace, in the name of war.

If you wish to see church interior, you have to contact the building administrator, at least  two days in advance. Otherwise, the church is guarded with strong oak door, stylish walls and a locked, of course. 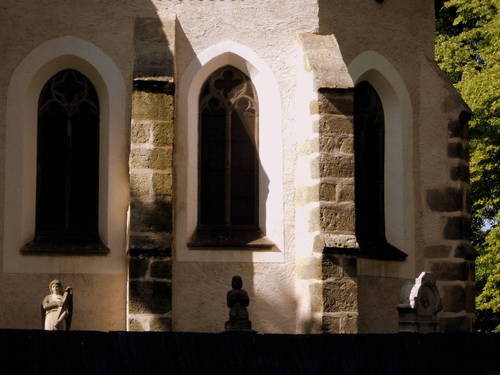