History is a great passion for the local councilor Chroust, certainly. With the ignition talked how Klatovy was formed, in one of several town hall rooms he stopped to show on the ancient picture how Klatovy was fortified ages ago. Needless to say that almost sealed - triple wall. It is also not surprising - Klatovy arose just as the royal city, when in the years 1260 - 1263 built Přemysl Otakar II.

We went through the today's administrative wing of  town hall, which used to serve as a college and where the soldiers lived in communist regime to at least for a little while admire the work of Eva Jiřičná, and above all try to understand this modern glass tunnel levitating in space between two ancient, but different old, buildings. Foot bridge that is connecting the halls of residence and the famous Jesuit church architect has designed recently. With the blessing of Bishop Franatišek Radkovský, glass foot bridge city officially opened in early May. 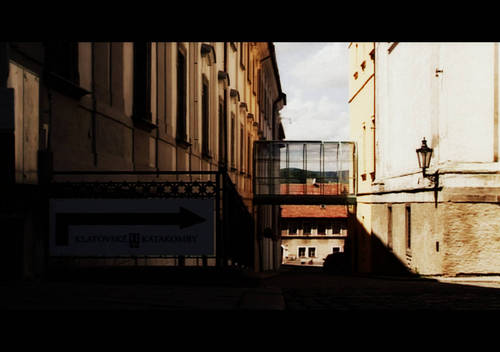 Our guide Václav Chroust showed us entrance, through which once led into the church to us then announced that he rarely uses. He didn’t do the exception, unfortunately. He leads us out to show us the entrance, which is used routinely. We went to the public entrance, where a glass door opens and a photocell with a camera we disappeared underground, in the crypt beneath the Jesuit church consecrated to the Immaculate Conception of the Virgin Mary and St. Ignatius. 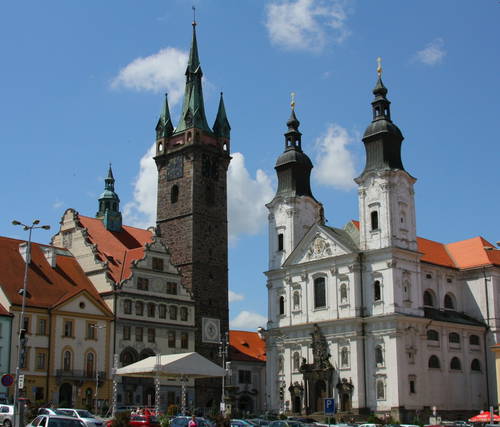 The crypt, where instead of the originally buried saints whom the church was consecrated, or kings, is here in Klatovy known as the catacombs. Was built as part of the church in the years 1656 - 1676 and served as a burial site, not only officials, but the Jesuit Order and its supporters. This is evidenced by the fact that in the crypt in the years 1676 - 1783 saved more than 200 dead - the Jesuits, citizens or soldiers.

Significant monarch of Joseph II., son of Maria Theresa, in his government time did lots of reforms, and among other things, forbade burials in coffins (1784). The new command is thus not avoid the Jesuit order, which required the deceased to the shavings in oak coffins fill by hops. According to the new rule of Joseph II. the deceased should be buried in graves in canvas bags with lime. Although his effort to save money on wood was removed during his life, the last buried in the catacombs was Antonín Weichs (1783).

Thanks to the ventilation channels, which was part of the crypt and was the exit on the roof of the church, was in the crypt of the environment and ensure stability, a gradual drying of stored body - ie mummification. The system was used until 30 of the last century when the church roof repair workers inappropriately showered waste trunks masonry pillars, roof ledge. Due to this works they were disturbing the temperature and humidity in the basement and broke most of the mummies. Total 140 mummified bodies were destroyed in 1937 buried in a mass grave at the cemetery of St. Jakob. 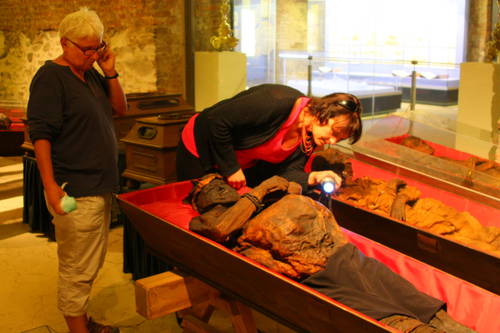 We were lucky to see conservators at work who regularly care for the "shape" Klatovy mummies, which is now in the crypt of 38, including seven of them are hidden from public view. The white "overalls" opened lid of the glass coffin with a flashlight in hand, looked at in detail dried body weighing about ten kilograms. Several of the dead took backstage to do the necessary adjustments. They advise how to procedures to preserve the rare exhibits as long as possible. For my work I have respect, as well as several hundred years old bodies - symbols of transience of human life. 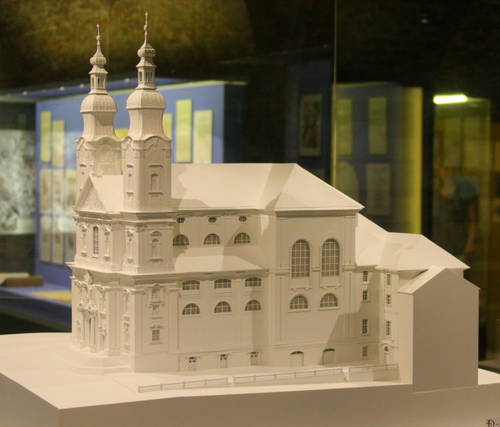 In addition to the mummies, which are undoubtedly the biggest attraction for tourists, but visitors can see much more than catacombs. For Klatovy and the Jesuits, which gave the appearance baroque historical center of town, is dedicated to the whole show. Definitely worth a visit.