However, we are going to tell few notes on a town in area below the castle. About two thousand people live in Zbiroh. They way life pace is typical for a town of its size which enjoy tourists usual during the summer months. But even in winter there are going on a lot of things in Zbiroh. It is surrounded by rocks, ponds and meadows which are crossed by many bike trails and nature trails. When winter starts it is worth going cross-country skiing.

We visited Zbiroh when it was still summer heat. There was peace and quiet. In a half-empty pub shortly after noon the waitress didn’t show any sign that she had been used to quickly serve customers. It seemed that she had love for pub but hate for people, as Jara Cimrman would say. There are five pubs in Zbiroh.

Mucha, Sramek and others

A very pleasant lady in the information center gave us all the information we needed and pointed towards the castle. The castle is located up on a hill. Every visitor who comes to Zbiroh goes also to the castle. There is nothing to see in the town with a five-leaf rose of Rozmbergs in its coat of arms. Well, except a municipal museum, and museum of Josef Vaclav Sladek, a poet and perhaps the most famous figure born in Zbiroh. Alfons Mucha, an extraordinary painter, looked for inspiration there as well as Frana Sramek. 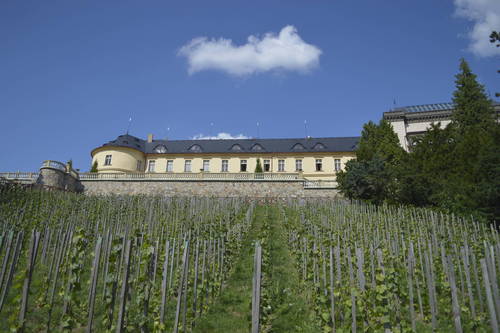 Life at the Castle

A road up to the castle was really steep and gives you a hard time. However, not only the fittest may visit Zbiroh Castle. There are two parking lots. One by the entrance and the other up right in front of the castle.

„Thirty crowns for the entrance and a dog,” said the cashier. She nervously watches a niche that ominously approaches her temple. She sits in a box that resembles a newsstand that Maxipes Fik brought with a newsstand operator to his lord. It happened when he as a jumping champion jumped for newspapers and was worried that some impudent rodent would dig until it reaches her table. Her worries are right. There are not just blooming roses, meadows and even vineyard in Zbiroh Castle park. 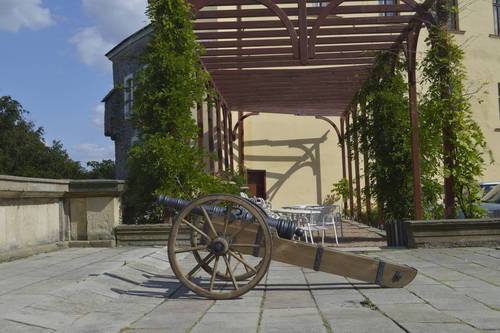 There were far more important things going on in Zbiroh. For example, the famous Slovanska Epopej by Mucha, which is being mentioned today with regard to a controversial move out from Moravsky Krumlov. Much did Slovanska Epopej here, a the castle in the great hall. 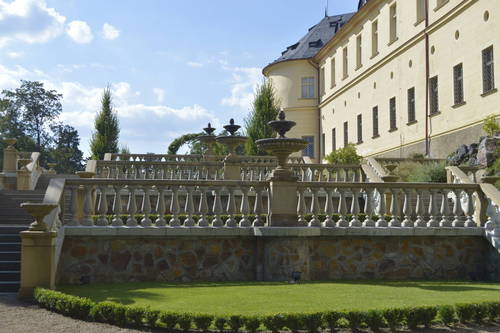 Zbiroh is known as a castle of three emperors. It was owned by Charles IV, Sigismund of Luxemburg and Rudolph II. Really significant emperors. Why they had chosen Zbiroh in the first place? Was it for its deepest water well in Europe (163 meters), for its unusually thick and high walls, or for the fact that after the nationalization it became a top secret place. The last thing mentioned, however, didn’t worry emperors at all and it even doesn’t have to worry us. After 1989 this perhaps spy hideout became a place of culture and entertainment.

There is different world in the castle’s tavern. Waiters wear medieval clothes and have great attitude to guests that is greatly charged.

Please accept our invitation to castle Zbiroh. It is known as the three-emperors castle and also ...