Published: 19.8.2010
This locality, including unique panorama of Tatra peaks belongs traditionally to most popular tourist targets in High Tatra, and was chosen, not by chance, to 77 candidates in world-wide internet vote, regarding new seven world´s wonders.

Štrba Lake has a surface of 20 ha approx. and is situated in an altitude of 1346 metres a

bove sea level. It is the second greatest lake on Slovak part of High Tatra Mountains (after Great Hincovo Lake – over 20 ha), and its depth reaches 20 metres. The first object on lake coast was built by Count Szentivanyi in 1872, and so, the construction of sanatoriums and hotels in this locality begun. Some of them form, even today, the typical panorama of Štrba Lake as well as the silhouette of ski jumping bridge, constructed before FIS Ski World Championship in 1970. These are, first of all, hotels Patria and Panorama (from second half of 20th century), interesting thanks to its unusual architecture. 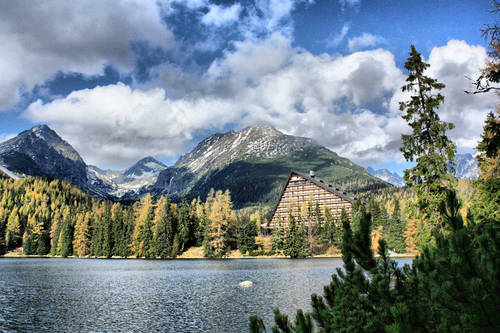 At the beginning of 21st century, an extensive reconstruction of the oldest object along lake coast started. After reconstructed Solisko Hotel, healing house Hviezdoslav undergone the renovation, and other dilapidated old objects in the neighbourhood, and luxurious complex of Kempinski Hotel was created. Just in 1880, there was available a jetty, including a roof for boats. The lake was used not only for relax navigation, sporting fishing or bathing, but also for gaining of ice for refrigerating purposes. 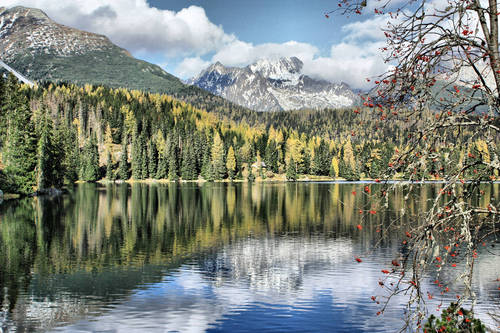 The boats on the lake were in operation till 1970, when this activity was not permitted, from the reason of great water pollution and also therefore that the visitors were very undisciplined, indeed. So, the tradition of boats´ navigation was renewed after 30 years, anyway, under severe control of nature protectors, which protect, except any other animals and plants, especially rare sort of fish (Coregonus maraena). So, at present, you have available wooden rafts for three and five persons or canoe, and you can also lease a boat with scullewr, for surcharge, of course.