Published: 15.9.2011
Many spa localities are available in Slovakia, and most of them are based on healing sources. So, such numerous hot springs.and their healing effects were known to people in past. And, no doubt, Vyšne Ružbachy Spa, belongs to them, too.

At foot of Spišska Magura, the sources sprung since long ago. The springs consisted big contents of limestone which subsequently were settled along, forming some stone circle around. Inside Vyšne Ružbachy Spa area, you can find several small similar sights, around just dried springs, and you are recommended to take attention. As an example, it could serve so called „mortal ditch“ – i.e. crater, where the water is missing, and carbonic acid is getting off. This gas is situated close to the earth and kills all live subjects which enter inside the crater.

A Nature Against Stress

Nevertheless, we do not wish to frighten you from the very beginning. On the other hand, you can find there many surprises of very pleasant character. So, you can fully enjoy the greatest one, natural lake of 20 metres diameter approx. with typical name of Crater. In a depth of approx. three metres, spring of water wells up , the temperature of which reaches 20° C all year round. So, this lake is not frozen over even during winter, similarly as a torrent, where the spring water flows off. This Crater lake is declared as protected nature creation, so near thermal bathing place is more suitable for swimming.

Isabelle is the most substantial spring from all ten local sources. Its healing – antidepressive effects are influenced with positive contents of limestone , magnesia and lithium. So, from this reason, the effect is being used within healing of psychical problems, high blood pressure and all diseases connected with aterosclerosis, brain attacks, etc.

Healing effects of the water are added with another progressive procedures. Except of this, at present, the spa is being used, in considerable measure, for relax stays, connected with wellness and climatic effects of marvellous millieu, inside mountains, at the border of two National Parks – i.e. High Tatra Park and Pieniny Park.

The archeological findings confirmed that the people lived there, close to the springs, since primeval age. The construction of the oldest spa building is documented just in 16th century. In these buildings, Polish and later even Hungarian aristocracy met there.

The name of Ružbachy is derived from Saxonian colonists. They came there in Middle Ages, to the area, plundered by Tartars, on invitation of Hungarian sovereigns. This expression means „Roaring Torrent“ ( from German words „rauschen“ and „Bach“.). The communiuty is located at confluence of two torrents, heading for Poprad-river and to the Baltic Sea.

Nevertheless, new restoration of spa life came within 19th century and the first half of 20th century.Vyšne Ružbachy  belonged to most modern spa centres of Slovak territory.

One fact is interesting: the owner was, thanks to his wife, a relative with King´s Bourbon Parentage, whe there was involved also Alfons XIII. Spanish King. He visited the spa shortly before the 2nd World War started.

The period of busiest boom of the spa remind some buildings, such as. monumental stone White House, constructed in Biedermeier style, located on rocky cliff above the park.

This building became allegedly an inspiration for one palace, constructed in Monte Carlo. So called Swiss Houses , in style of traditional Alps architecture , draw big attention of visitors. Big spa hotels started to be built since 1970. At present, all such buildings undergone vast reconstrcution works, in order to fulfill actual needs, from modern equipment and comfort  requirements from guests. As an example, it is Grand Hotel Strand, luxurious four star hotel, with covered thermal swimming pool.

As far as the other healing units are concerned, let´s indicate, for instance,Healing Houses Travertine I and II, joined each other, offering 60 double rooms in pleasant surroundings of spa park close to the forest. 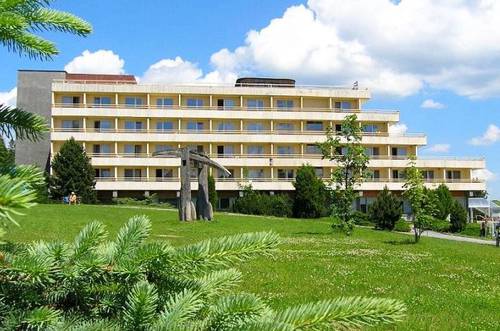 Delight for Body and a Spirit

The environment of spa park is beautified with statues and plastic arts, as dumb witness of long tradition of artistic meetings. At that time, in neighbouring travertine quarry, first hundred pieces of very interesting artistic works were created, by hands of artists from all over the world. When the excavation of actuall protected travertine was terminated, the sculptors were changed by wood-carving artists, they continue ahead in such tradition works.

Vyšne Ružbachy Spa offer attractive stays even during winter months, not only thanks to thermal springs or short distance from High Tatra Mountains. Just in the neighbourhood of spa area, a ski park with arranged slopes, including artificial technical snow covering and evening illumination, is to be found.

The spa surroundings is offering unnumerous possibilities of interestin excursion targets, as far as nature, historical or cultural sightseeings are concerned. 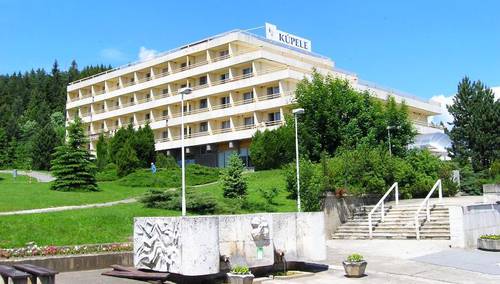 Published: 18.10.2020
Today, wandering shoes take us to the Pieniny National Park, which is the smallest national park in Slovakia, but its beauty and uniqueness is one of the most beautiful. The goal of our tourist walk will be the highest peak of the local mountains - Vysoké Skalky.