Published: 25.9.2007
The town of Mikulov is placed on southern state border with Austria ( 2 kms from border crossing distant) in Břeclav district, situated 50 kms of Brno and 70 kms of Vienna only. The town belongs to Carpathian abasement system.

The town is known as „a cradle of  wine-cultivation“ , the vine is growing here since third century, the Roman legionaries started to grow the vines here. Anyway, Mikulov is not only the town of wine but also the town of historical monuments.

Originally a Slave community was founded in a basin between three hills, they are: Kozí hrádek (Buck Castle). Zámecký vrch (Castle Hill) and Kopeček (Small Hill). The town´s name is derived from the personal name of Mikula = Nicholas. The oldest written notice about Mikulov comes of 1173.

Mikulov-Castle, originally built at the beginning of 13th century, belonged to most extensive constructions at that time period. You find it on Castle Hill. However, the sadest day of its history happened to be 22nd April 1945, when the Nazis, after rummage of artistic treasures,

fired a crack and the castle was completely burned out.

Further historical monument –  main square in Mikulov. We find here a fountain with a statue of Pomona of 1680. The statue holds, with its left hand, a shield with Dietrichstein buckle and under its right hand he holds cornucopia. This fountain forms, together with plague column, a town dominante.

Jewish quarter was originally in today´s Husova street and was formed with 317 houses. Anyway, 90 buildings presereved till today. So called Upper Synagogue is most important. You find here also a Jewish cemetery, where you can see more than 4000 tombs,

coming from middle of 15th century. The oldest readable tomb brings a chronology 1605.

As to natives: it was Karel Krautgartner (1922-1982), famous Czech musician, saxofonist and clarinet-player. He operated in Gustav Brom Orchestra, and after 1945 he played as a leader of saxofon-section in Karel Vlach Orchestra.  Further, it was Adolf Scharf (1890-1965) a lawyer and a President of Austria. 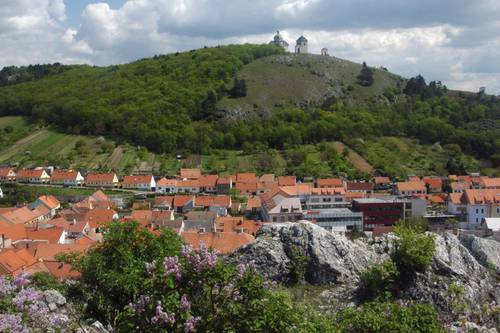