Published: 25.6.2010
Vranov nad Dyjí Castle belongs, no doubt, with its unique locality and interiors, to most beautiful sightseeings of South Moravia.

Typical castle silhouette is rising on steep rocky headland above Dyje-river, a couple of hundred metres distant from pier of Vranov Dam. You can get there from the community of the same name (at petrol station in the village, upstairs the hill, following road No. 398).

Nevertheless, we wish to recommend you to leave your vehicle on parking palce at the end of the community, on your right hand. Another small parking place, situated along winding road at hill-side, in front of the entrance to the castle, is able to take a couple of vehicles only, so, it is mostly full all the time. From parking place, near to the forest, the path leads you soon to main castle entrance. This short walk will be very useful for everybody, despite the fact that the path is leading you mostly upstairs, especially during hot summer days and after long-term sitting in the car or in a bus it could be quite pleasant. Moreover, one important instruction, especially for parents with small children, or for persons, suffdering from dizziness from heights: the entrance way towards rocky cliff, where the castle is placed, is furnished with rather low wall along both parts, and in case of inattentiveness, you could fall down steep valley or into castle ditch! 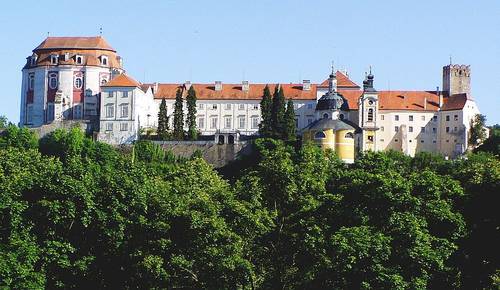 It is obvious that the predecessor of actual exposed Baroque castle was Middle Age Castle, nearly inaccessible. Such predestination was made with its position on Moravian and Austrian border. The former castle form could remind preserved defensive tower, placed at castle

entrance. According to the guide information, local history is starting since 1100. The oldest chapter of Vranov Castle is closed with 30-years´war, followed with big fire. The seat was handed over again into hands of Althann Count Family (their ownership was before confiscated,

as a consequence of their participation on Estates´ revolt in 1619). The castle could be thankful to this Parentage for its actual Baroque face. Nevertheless, typical look gives the castle especially so called Predecessors´ Hall, containing rich internal decoration - this is typical oval object, situated at the edge of the rock. Its harmonical architectonical look (Jan Bernhard Fischer of Erlach is the designer) is characteristic owing to dimensions 25x15x15 metres. Consequently, the castle complex was enriched with Holy Trinity Chapel and other buildings.

To next castle owners, which are worth to be mentioned, belongs Mniszek, Polish aristocracy

Parentage. They owned the castle till the end of 2nd World War. This noble Parentage erected white column with a cross, just opposite castle cliff. It is a gift-memorial, made by widow after one of castle owners. At that time period, Vranov Castle presented luxurious seat, including rich furnished interiors, popular not only for exciting hunting experience in surrounding

wild nature, but for rich cultural life in the castle, where arrived also the artists from Emperor´s Court of Vienna and from Poland. This tradition continues till now. During summer months, many concerts and theatre performances are taken place in courtyard, chapel or in Predecessors´ Hall. From interiors, there is to be mentioned, first of all, rich collection of furniture, pictures and books from various time periods, and a collection of stone-ware (pottery) and china (porcellain) of local production.

Nevertheless, great merit on the fact that Vranov Castle belongs to most visited castles of South Moravia, has very popular relax area around near Vranov Dam. This dam was constructed within 1930 -1935. So, tourist train is taking tourists from the beach up towards the castle. From Vranov up to Znojmo, Podyjí National Park is to be found. This park is thankful for its nature values that the

area was inaccessible for public for 50 years, as it formed a part of so called „Iron Curtain“. This fact is reminded to visitors in Information Centre in the community of Čížov, where you can find also couple of metres of original fenced barbed wire. On the other hand, Thayatal National Park is to be found along Austrian part of Dyje-Valley. The border could be crossed with several cycling paths, passing mostly most attractive places of interest, such as: Bítov Castle, Nový Hrádek u Lukova ruins, Cornštejn, Frejštejn or Uherčice Castle, whereas from Austrian part  there are Greiffensten and Riegersburg Castles, Kaja Castle ruins, as well as the smallest Austrian town of Hardegg, including popular local Castle and Thayatal Information Tourist Centre.