Nováky is the other town, at present, most important industrial centre of this region, and Handlová. well-known with its brown-coal mining, is the third town in the region. 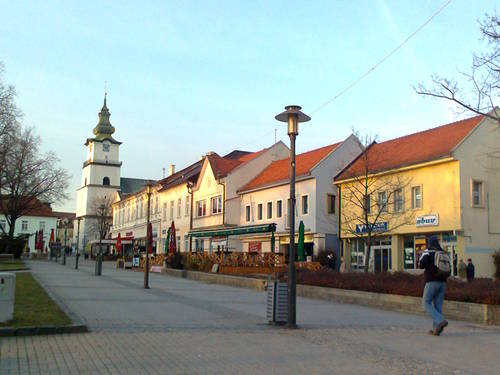 The first written message about Prievidza comes of 1113, when Prievidza, together with Bojnice, Nováky and Kocurany, were mentioned in documents of Zobor Benedictine´s Order. It is obvious, as a result of a research, that this community, close to tributary of Handlovka- and Nitra-rivers, was founded sooner. From originally Market village, situated on crossroads of merchant ways from Turiec Valley into Poland, a town was established, thanks to a

dvantageous economic conditions, development of handicrafts and trade. In 1383, Prievizda was granted their town´s rights by Queen Mary. So, this act became not only a guarantee of more free liberty but also wider economical possibilities. This fact had very favourable influence for development of production and trade. As Prievidza had no fortifications and even its own military troopes missed, the locality was forced to rely on a potentionally help of Bojnice sovereigns. And so, after short time period of free development, the locality became, since second half of 15th century till the end of feudalism, governmental town, within scope of Bojnice dominion. Despite this fact, Prievidza preserved its position of an important market as well as handicraft centre. However, the development of industry went round Prievidza till 1877. Nevertheless, since that time period, brown coal started to mined in the environs. Later, in 1896, railway line connection was terminated, and consequently, on break of 19th and 20th centuries, guild production changed into industry. However, at the beginning of 20th century, an important shortage of labour helped to remarkable emigration abroad. Anyway, after the 2nd World War, the town completely changed its character, and was consequently a centre of local mining industry and adjoined branches.

Nowadays, Prievidza is an industrial and business centre of the whole region. The town got its attribute as „Upper Nitra Pearl“. Such name is well merited. This town, as a modern standard locality, with many institutions, cultural and social areas, full of historical monuments, but also as a town, full of green, is placed in the middle of mountains and hills. After 1989, Prievidza totally changed its economical base.The muffling of mining, chemical and energetical industry branches caused big loss of working places. On the other hand, enormous facility

for life environment (which hardly suffered in past) arrived. So, at present, the companies of light industry branches tool much more better position there. The town can offer for their inhabitants and visitors  all functions which could be expected for seats of similar size (at present approx. 50 thousand of inhabitants are living there). The town is divided into the following quarters, such as: Old Town, Pily, Necpaly, Kopanice and Štvrte, formed with cadastral area of adjointed communities of Hradec and Malá and Velká Lehotka.

Directly in Prievidza cadastre, two nature monuments are to be found. The first one is Hradisko, situated on a surface of 1,7 ha (in town-quarter Hradec). As protection object, it is multi-cultural archaeological locality, colonized ever since break of bronze and iron time period till Middle Age. The protection is referring to wild growing plants - orchids, Turk´s cap, and Hradec - volcanic hill (514 metres above sea level), which forms - inside rather monotony milieu - morphologic striking and unique nature formation. Nature monument of Kobylnice is situated on surface of 2,5 ha in Malá Lehotka town-quarter. This remarkable geological locality is a typical sample of Handlová stratum. The torrent´s erosive activity uncovered there the layers of coal sleam, i

ncluding accompanied mineral stones, creating drom this area - (together with diversity of plants´ and animals´ communions, including many protected sorts) - unusually attractive region of Slovakia.

The town of Prievidza could be walked on foot, up and down, within a couple of hours, but why to be in a hurry, and do not have a stop at some sightseeing, offered by this town, surrounded with beautiful nature? So, let´s introduce you at least some of them! The construction of Piarist´s Roman-Catholic Holy Trinity Church was started just in 1666 but it was terminated even in 1750, anyway, the consecration was effected in 1753. Anyway, at present, this church belongs to most beautiful constructions of Central Europe. Roman-Catholic St. Bartholomew Church, originally of Gothic style, was built at the end of 14th century. The building was  reconstructed and enlarged several times. 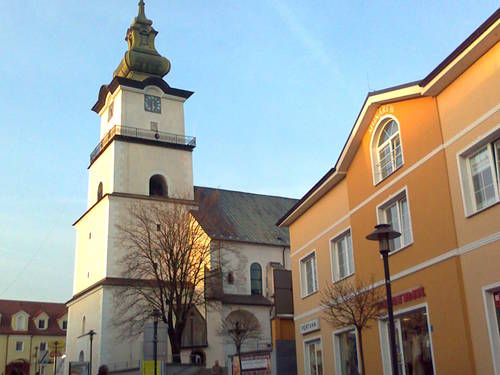 St. Cyril and Method group of statues - it is a work of Stanislav Mikuš, academ

ical sculptor. The statue was put there by courtesy of local section of Slovak Union. The group of statue was unveiled in 1998. So, Prievidza was the first town in Slovakia which demonstrated a respect to such important apostles, Thessaloniki Brothers.

Some civic houses of 18th and 19th centuries, placed on Liberation Square, including a building on Hviezdoslav Street, are registered in a survey of culture monuments.

It is also worth to visit Rušňove depo (Steam Engines´ Ware-house), declared in 2005 as natural culture monument. You can find it inside area of local railway station, built within 1912-1913, and enlarged in 1938. This depot (ware-house) belongs, with its technological equipment, to most preserved objects of such type in Slovakia.

Anyway, it is only a small part of monuments, which could be admired in Prievidza. Within 2004-2005, the town made, in cooperation with local tourist information centre, from financial sources of European Union, very interesting project, under name of Golden Prievidza Path. Two circles of walking routes were created, where the visitors can make acquaintance with all preserved architectonical monuments, sightseeings, nature beauties of the town and environs, and will get useful information about objects, existed in past which were not preserved till now.

Published: 23.12.2010
The town of Bojnice is well-known not only in Slovakia, but also in abroad. This fact was deserved well of its spa tradition, most beautiful Slovak castle as well as the oldest and most visited ZOO-garden of Slovakia. So, rich culture of the town as well as a beauty of surrounding nature allures a lot of tourists each year.