en.infoglobe.cz » Places of interest » SVK: Trenčín And It's Castle Rock

It is nearly impossible to pass West Slovakia and not to visit  the town of Trenčín. This locality with approx. 50 thousands of inhabitamts was always and it is even at present an important traffic junction. Even eye-witness could remember, at big crossroad in south part of the town, that D1 Highway from Prague to Brno and to the the east of former Czechoslovak Federal Republic would pass there.

And just at that place, the branch from Bratislava, marked as D 61, would join such road. Nevertheless, the time changed, and at present, D1 Highway passes the town not only from west to the east but in north-south direction, from Bratislava to Žilina. The actual highway passes round the town from respectful distance, but this fact could not be a reason for that the tourists could not visit Trenčín. The town has many attractive places of interest but two of them overtop with its importance, the other ones. Both localities are connected with its majestic cliff, including imposant castle silhouette. The rests of medioeval citadel undergone recently an outstanding reconstruction. 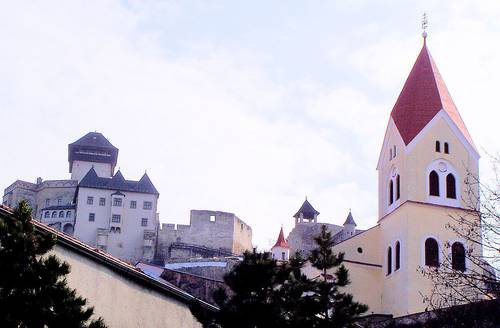 Despite this fact, both attractive places would require an extraordinary interest from future generations, as it is just indicated with damaged ramparts, starting to be disintegrated in some places. You can also mount to the top of the tower, but at present, you could be satisfied with several spring views from low part of the castle. The historical city nucleus is surrounded with new house-quarters, the island inside Váh-river is full of sporting grounds, and the face of it could be changed soon.

A necessity of the construction of new railway bridging over is discussed, which would enable to make more to put straight  the actual route of rails. Possible modernization of very frequented railway route between Bratislava and Žilina to higher transfer speed would not be effected.without such changes. The intentions of architects receive its concrete face, how to build the town in direction to less used bank of the river - with creation of new town-quarter with embankment promenade.

From the views, you can see Monastery building of Baroque style in Skalka nad Váhom, or to follow traffic along the highway, mentioned above, at Zamarovce rest area (If the name of  the community reminds you something, it is a surname of Vojtech Zamarovsky - 1919-2006 - well -known writer and propagator of antique history, you are not mistaken, this man was born in Trenčín).

At foot of rocky massif, not far from railway and bus station, you cannot overlook the building of Tatra Hotel, made of Art Nouveau style. The attention could be paid also to tourists who do not intend to be accommodated in the hotel. You can pass hotel lobby and mount back glassed terrace. It was the only place, where it could be possible to see the historical inscription engraved on the rock. However, till 2012, the entrance will not be permitted as the hotel will be under reconstruction, and the access to the inscription will be closed. The inscription was left here by Roman Legions. They spent there winter saison 179-180 A. D. during an excursion of Emperor Marcus Aurelius and his son Commod, against Quads, German clans, which inhabitated this area before the Slaves came there.

As this inscription appears in Central Europe at most in north situated point, at north direction from Danube, forming the border of Roman Empire (Limes Romanus), and was discovered just in 19th century, there were to be found some doubts, whether the inscription would be genuine. Anyway, at the end of 20th century, an enexpected finding of tomb-stone in North Africa exterminated fully such opinion. This inscripion mentioned courageous acts of dead legionary, including participation at victorious battle at the locality of Laugaritium.

However, we do not know how the name „Laugaritio“ (identical with a name of „Leukaristos“, mentioned by Ptolemaios in the oldest map of the world) was created and used. Anyway, if you visit some local pub, local „standard guests“ will inform you about characteristic Slave explanation of such name (do not forget to praise local „Old Herold“ distilling brand or Dukla ice-hockey-team). So, this name was created probably from Old-Slave connection: “lauka v rici“ - i.e. expression of destruction of foot-bridge, caused by inundation or by enemies. And this explanation will be held in memory of everybody who will have the intention to visit Trenčín.