Nevertheless, it is valid even in such case that it would be better once to see as hundred times

to hear it. The time is passing quickly, and so, hardly anybody could realize that just seventy years ago, there was culminating a dispute, regarding construction of international water work on Danube-river. The construction, according to so called „C“ variant, was nearly ready. It is a quarrel,which young generation is not informed about at all. So, let´s explain, what happened at that time! 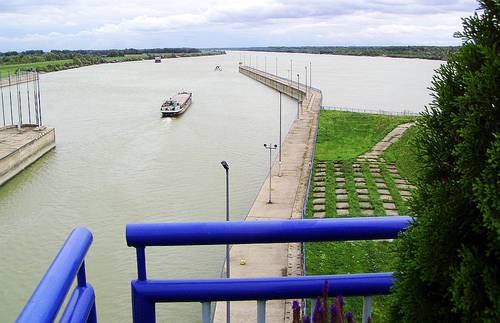 Dam-pier of Gabčíkovo water work is placed approx. 40 kilometres in south-east direction from Bratislava. You can reach easily this locality, going on road via Šamorín, or by cycle along Danube pier, or by means of excursion vessel (in summer months), which sails down just behind navigation room. The experience from Danube navigation could be reinforced by means of oppressive feeling from the depth among high concrete walls. You you can see from photos, we stopped on the pier under rather unfavourable autumn weather, when strong and cold wind made quite high waves on dam lake, preventing a group of staring tourists from staying there, and so, they were forced to leave such position and be hidden in warm kiosks or buses.

Typical tower is to be seen from far. It is inspection tower, checking the operation (working

order) inside two powerful barrage rooms, and also on upper and lower roadstead. It is a space before the entrance into or exit from navigation room, where the vessels wait, in front of traffic lights, for the instruction receíved from inspection tower, when it is suitable time period to sail into navigation room. In lower part of the tower, an outlook platform is situated, enabling nice view for visitors, too. You have there telescope available, and you can follow, under favourable and clear sky

weather conditions, on horizon a silhouette of Kamzík TV tower in Bratislava.

The information table presents detailed data regarding technical parametres of such water work, unique in Central European scale. The older generation could probably remember endless discussions in press about „C“ variant, but the actual young generation does not know what´s on. So, let´s permit to make short excursion into history of this work, as final decision of legal disputes (quarrels) were not fulfilled till now.

So, men´s interferences into nature flow of Danube river started in past, long time ago, with construction of anti-inundation piers, with a target to prevent the lives and properties, or to get new soil, by means of drying up of humid ground along river banks, or complete river branches. Later, at the end of Middle Age, a necessity  appeared, to navigate a river for needs of increased water traffic, and so, the main flow of the river could be adapted subsequently up to actual route.

This water work, which could improve the passage across, securing more stabil navigation

depth in the section among Bratislava and Budapest, was thought over to be introduced in past but concrete outlines ware taken with this project just since 1960. After long judging of different solutions, a signature of international agreement was effected. Czechoslovakia and Hungary came to un understanding to build water works´ system Gabčíkovo-Nagymaros. Such water works would fulfill more targets, such as: the protection against inundations, the increase and stabilization of navigation level, according to instruction of Danube Committee, regulating water traffic on such European river, but also its energetic use. The upper stage of Gabčíkovo would preferrably cover the need of so called „top energy“ in both countries, while the lower stage of Nagymaros (it is a community, placed in north direction from Budapest) would serve as some stabilizing basin.

However, this complete project met the opposition from the very beginning, especially from part of life environment defenders. They managed to persuade prevailing part of public opinion, so that the question of the construction was postponed into political stage, as an expression of resistance against Communist regime. Finally, the Hungarian part stepped back the building of Nagymaros stage, and refused to participate at construction of Gabčíkovo stage on common Slovak-Hungarian Danube section.

So, under the situation, when Gabčíkovo water work was nearly completed on Slovak section, the designers and ingenieurs found some supplementary solution, how to avoid disagreement of Hungarian part, regarding dam construdion at their territory. So called „C“ variant was postponed from original Dunakiliti rapid (against river-flow) towards Slovak territory to Bratislava outskirts - Čunovo quarter. So, originally planned dam lake - Hrušov basin - became smaller but Gabčíkovo water work was set into operation in Slovak territory only. The boarding of Danube flow begun in October 1992 and the electric power station itself was terminated in 1996 (It covers approx. one tenth of electrical energy consumption of the whole Slovak Republic).

Most of visitors will be interested in (during Gabčíkovo sightseeing

tour) powerful navigation rooms, which are 34 metres wide and 275 metres long, where even great passenger vessel or cargo boat could be hidden. During our visit there, an excursion ship Flamenco (home port La Valletta) headed for, against river stream. Since time period, when Danube - river is connected with Main and Rhine rivers, you can see, along Slovak section of the river, the ships (vessels) taking flags of West-European countries, including the Netherlands, France or Switzerland.

When we crossed dam-pier (with powerful bridge crane, specialized for attendance of hydro-

electric power station, we reached the island, created between old Danube river bed and supply and draining canal of this water work. Three small communities are to be found along the banks, such as: Dobrohošť, Vojka, (in summer months, you can use a ferry through supply canal, close to Kyselica village) and Bodíky. This island is richly divided with river branches, the snug corners of which became real paradise, including representatives of meadow flora and fauna. After two kilometres of walk, you can come to old fisher´s „czarda“, at the bank of old Danube river bed. This locality is very popular stopping place of watermen, navigating this Danube section. As the curiosity, these are the piers of a canal, 17 kilometres long, supplying water toward the dam above the level of surrounding countryside. 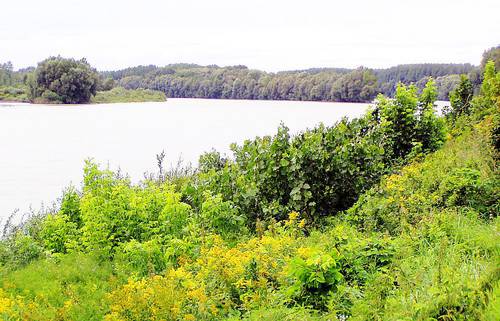