Hazmburk stands on the same named hill in the village Klapý, is the most significant landmark of the lower Poohří. How beautiful it looks from the bottom, so beautiful is the sight of him. Nearby Říp it looks like over hill and many boring these two peaks in a position of competitors.

When you look around the Bohemian Highlands, to the sacred mountain is extra because of the plane around, while peak of Hazmburk had to push among other peaks with a capital "P”. Maybe if Forefather Čech with his vision used to stand on him, Czech country would be super power till today. On the other hand, Prague probably would not be the Prague, because from the peak not far from Libochovice he wouldn’t see to the place where the mother of cities is.

But let´s finish the speculation. Reality is what it is and the Hare Castle, dubbed as Hazmburk are the ruins now. I think, about the history we were expanding enough last time, so by this time we will not waste your time. Hazmburk is just looking for more than a lengthy chat. 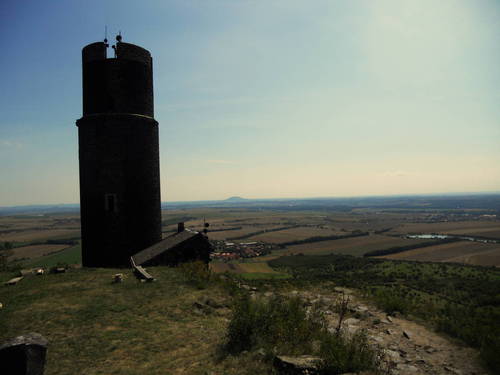 Several paths to one destination

The Hazmburk we took one of the shortest paths from the village to work. Ancient ruins in summer than winter, greatly revived. Parking lot where the car unattended for 30 crowns, is in full during the holidays. I also stand at the foot of the mountain.

A concerned mother chooses for her offspring to live too, which corresponds to the exhilaration summer holidays, the appropriate way. Safe and not too steep. Brigadier, who gets the parking fees down, recommends her the yellow tourist sign.

The very way now and then opens the beautiful vistas to the landscape, so when you're not narrow, trodden among nettles. In addition it is opening on each "intersection" too different route options. If the yellow tag is suitable for mothers with children, will be appropriate for me more adventurous option, but unmarked. Too steep and the terrain on which would have seemed like a mountain goat at home - that is, what is called the shortcut. 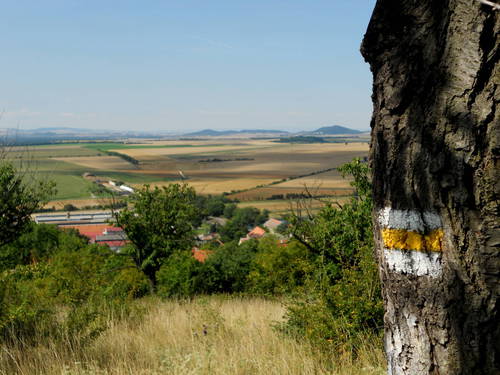 Hill rises considerably, and the ground and with it the stones uncomfortable slide down underfoot. Doubts about whether to continue upward or return to the path laid down for "normal" tourists are lost and looking down at the very idea of ​​"descent". The chances of successful completion of the mission are hiding in the trash scattered through far more densely than any tourist signs. Through this "strange" signs, which are known for the Czechs but unfortunately, it is clear that I am not the only one who released this way. Although the sun was hot and the sky is the day almost cloudless, the road stands, hidden among the trees, it seems darkened. Similarly, hopeless, and it seems on all fours what the shortcut literally claimed on some places. I hear voices, and the trees on the hill above the sun shines. I am saved. All dirty and breathless I climb up just a few steps from the castle gates. The expedition was successful, but definitely not recommend :-) 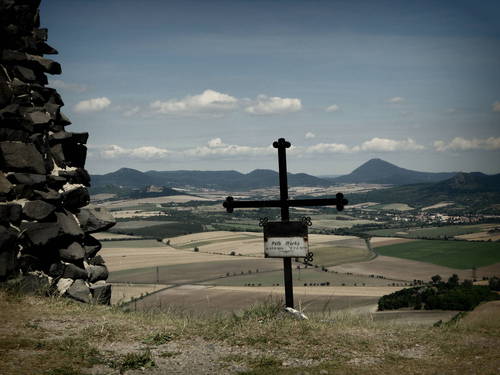 Life at the Castle today

A cashier, who spends on Hazmburk day after day all the season, wants 50 crowns for a ticket. She lives down in Klapý and up drives her car with the logo State castle of Hazmburk that parked near the gate. If she wouldn´t have to take care of money, she would go by walk to work. Who would have wanted her work might envy, he should know that she works nine hours a day for a few "crowns". The payment must save up for when the castle was closed and she is without work. Now in the summer but looks carefree, smiling at visitors and a pleasant atmosphere is enhanced on one of the most charming view point. 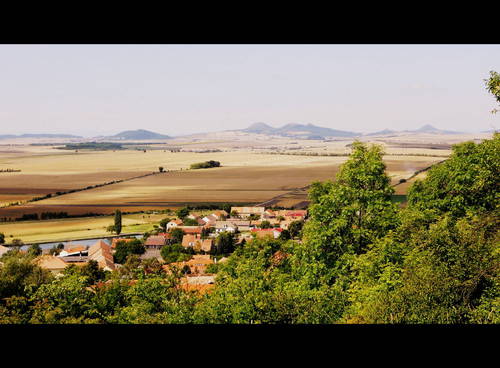 Exactly for this purpose, the ruins of the castle serve now. On them self you won´t see anything special. The most luxurious view of the whole Bohemian Highlands offers fixed White Tower.

Published: 28.4.2012
Castle, whose tourism fame can´t be compared with its peers in other parts of the Czech lands, but only few offer such a view, just as the Hare Castle halfway between Prague and north of republic.