Arriving to Louny, you pass many dwelling houses along both parts of the road. All buildings have its typical feature. However, it is a typical model of Communist architecture, presenting the ideology, which missed very little towns in the Czech Republic. This iron-concrete result of past plans was to get living possibilities for as much people as possible inside smallest space. This fact could not be hidden by tonns of coloured glaze. „This is not a beautiful town, we make a small stop in the centre, and continue our trip to Raná!“ young girl says. 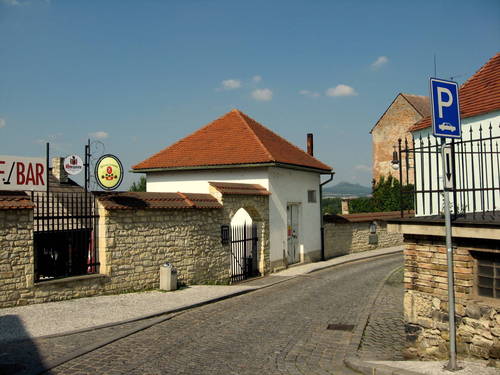 Louny views from any place

Two old ladies are waiting for bus to Prague, have a chat, looking at a scene at sunset when the sky is becoming pink. And thus hilly countryside gave even more extravagant character to the town. Just from bus station, it is wonderful view for all towers of historical nucleus of Louny. Far away, you can follow the hills of Bohemian Highlands. As a dominanta - it is Raná - just the hill, where the girl intended to travel and did not have a stop in Louny at all. 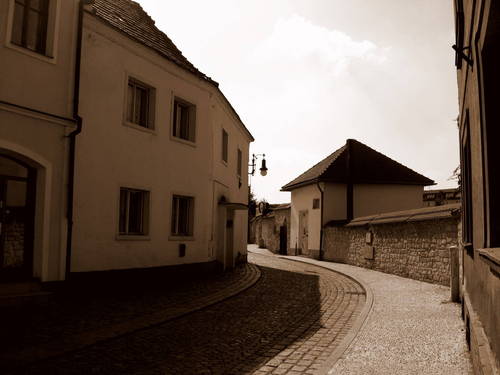 As far as the parking in Louny is concerned, it is no problem. Huge parking place is available a couple of steps only from supermarkets, not far from historic nucleus. There is a place for many vehicles available. On the other hand, the parking in front of town hall, St. Nicholas Church or Museum building, is rather problematic. You have to pay a fee, and, frankly speaking, the car is not too suitable object for parking there. This fact will by understood by any receptive person, who passes Žatec Gate. 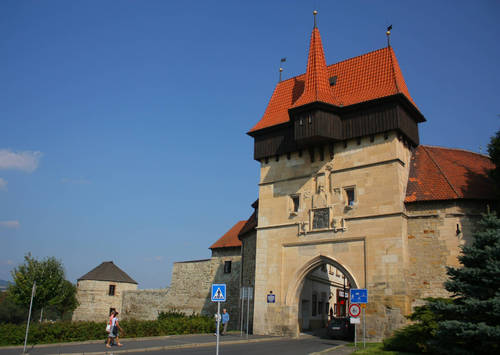 Žatec Gate, which was constructed in 1500, is strikingly resembling to Prague Gate in Rakovník. Great part of fortification, including two gun bastions, were preserved till now. Originally, this gate was constructed near to some other gate (Prague Gate), which was placed there till 1861.  However, the construction was destroyed later. Today, Žatec Gate acts as a border of two worlds, It is a gate, dividing its modern conception, where the real town is out of date, where the people are pleased to live, from the town which has its history and culture.

It is visible just after couple of steps in ancient small streets.Moreover, these streets are in perfect condition. You cannot find non-restored facade or even house-ruins in city centre. And if you find something, so it is a house, surrounded with scaffoldings and several hard working Ucrainian workers. This is really a good policy of the town, as well as the mentality of the persons who are living there, So, you can find everywhere clean and well arranged places. 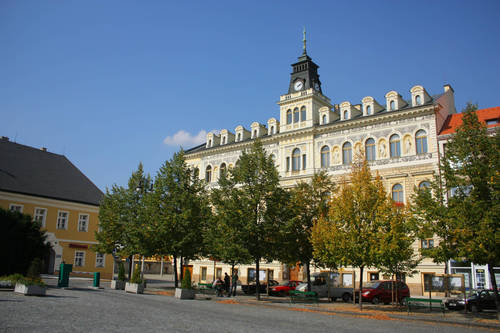 Even the confectionary reminds passed times. Two elder ladies in pink aprons offer the sweets to local persons, accompanied with the young girl, Louny visitor, who was in a hurry before. And now, she enjoys such pleasant atmosphere of the town, drinking punch and eating a piece of a chocolate, with a cream inside. Nevertheless, twenty minutes before six o´clock, a woman in pink apron starts to clean the floor in the confectionery. It is true, that shortly before closing dead-line, nobody could come and those, who are inside, are forced to shorten their stay there. So, this is a way of life in small town, placed in the same lines, day after day!

Nevertheless, St. Nicholas Church remains town´s dominanta. This top work of late Gothic time period could be admired from all angles. You can see it from main square, from Žatec Gate, from local museum, gallery and even from far distant bust station. And each view is offering something different. 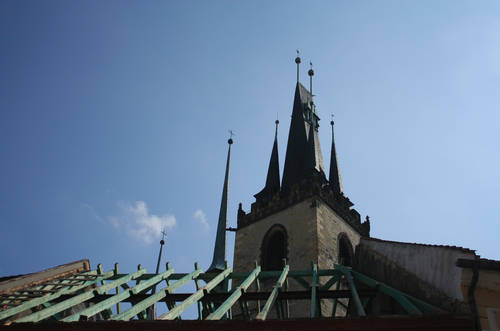 In past, in 1332, the church in Louny had quite different form, and was consecrated to St. Cross. Anyway, the change was effected after its reconstruction, at the end of 14th century. However, the church burnt out, together with city centre, in spring of 1517. Benedict Rejt, King´s architect, was engaged in church reconstruction and built the church in a form which is known at present. He built hall three-navy church, with circling vault and pyramidal roof, which could become the opposite side of hills of Bohemian Highlands. The work was successfull, and St. Nicholas Church was really a nice Louny ornament. From its galleries, you have the possibility to enjoy (daily, except Mondays), wonderful view of the whole town and environs.

„South Gate of Bohemian Highlands“ or „A Pearl on Ohře-river“ - these are nicknames of the town. Except famous St.Nicholas Church, the town has, of course, many other places of interest, which are worth to visit. So, for example, these are: local museum, placed in Sokol House. Benedict Rejt Gallery, Jirásek Mills, or local Town Hall. 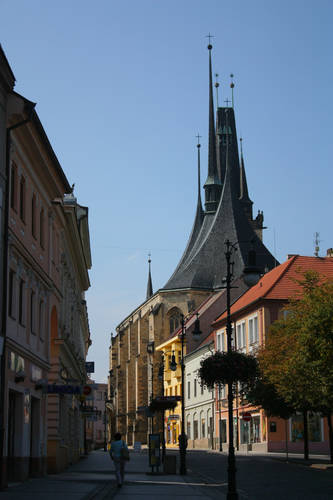 The tips for cycling routes in the surroundings could be found in web site: http://infocentrum.mulouny.cz(cyklotrasy.html

Published: 26.10.2007
The town of Domažlice is distant approx. 53 kms in south-west direction of Pilsen, situated not far from the German border. Its German name is Taus. Through the town flows the river Zubřina. The city centre was declared as the town preserved reservation. Domažlice is situated in an altitude of 428 m.

Published: 5.10.2010
The rake, scythe,flail as well as straw bunch, so, all these subjects the village of Lenešice has in its escutcheon. In past, it was very important agricultural community. At present, the village, situated at Ohře-river, is well known, especially thanks to a church in Romanesque style.

Published: 29.9.2010
Two years ago, church tower in Lenešice fell down. Nevertheless, local inhabitants did not explain it as a bad sign. And now, it is a couple of days, when a reconstruction will start. The bases are ready. Anyway, it is a merit of Lenešice Embellishing Club, that the church will be renovated. They are doing all possible for a fact, to return the building its original form.

Published: 6.12.2011
Not that big village but all the more important. Place, which was two years ago announced as the village of Central Region - Lány.

Published: 8.3.2011
Teplice has approx. 50 thousands of inhabitants.However, the city centre remains, during the day, nearly unpeopled. It is cold and the sky was dressed into tedious gray colour shade.

Published: 8.4.2011
If you decide to go down Ohře-river or would visit North-West Bohemia, you cannot miss the town of Kadaň