This town has nine thousands of inhabitants and could be reached, driving along D8-Highway, from several exits. Lovosice is situated along left bank of Labe-river, so this could be simple reason for a fact that the locality would be rather gradual. On the other hand, most valuable jewels are to be found in city centre.

A Winter Does Not Suit Lovosice At All

After sharp frosts in December, the weather became rather moderate in January. However, a dense fog was an undivisible part of these winter days. It is Sunday, and the people do not have any inclination to go out. It is a fact that typical side-scene of Bohemian Hills is missing. The hills are hidden in a fog and ice-silence, drawing a breath for the next tourist season, relaxing quietly for the time being. And the nature, as well as the live-animals cannot wait the spring until it comes. 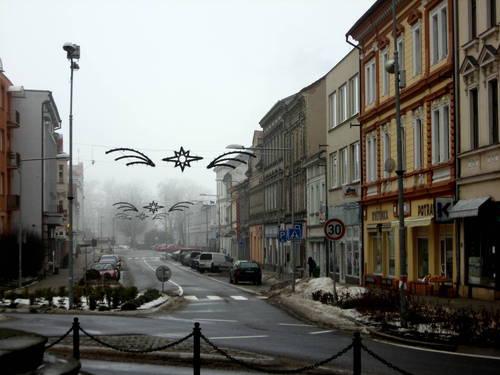 The same situation is valid for Lovoš, a hill, rising above Lovosice. All trees, plants or animals, which are for visitors the temptations No.1, remain during rather cool part of this time period in some twilight. Anyway, despite this fact, Lovosice does not lose anything from its atmosphere. And it is true that the town is made by people, not by weather, including its freak of nature.

Two young girls are standing close to St. Wenceslas Church, discussing about problems of another of their girl-friend. They move with their hands, trying to describe better the importance of situation, concerning this woman, who obviously was situated on her important crossroad of her life. On the other hand, St. Wenceslas statue is following them from church niche, wringing his hands at the same time. The statue, situated on main Lovosice road, was forced to listen to thousands of similar stories. Good luck that the statue is made from stone! 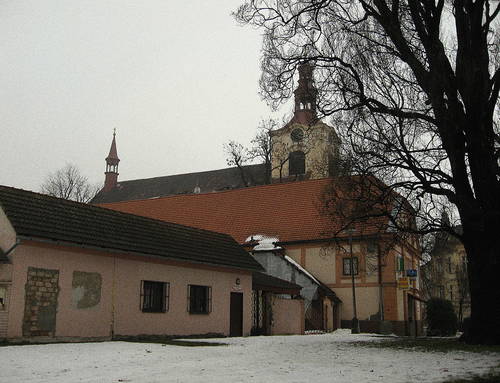 The church started to write its history in 1733, when its basic stone was put at that time. The construction of the church, which is a dominanta of local Wenceslas Square, lasted for 12 years. The church was built on the same place where its wooden predecessor was situated. Not far from here, small hunting lodge is hidden.

The inconspicious snow-white building is placed in the corner of the square, and draws attention with nothing special. Its left wing is hidden behind gigantic memorable tree. The castle was built in the middle of 16th century, and  Schwarzenberg Parentage wasits last owner. At present, it is a seat of school building. 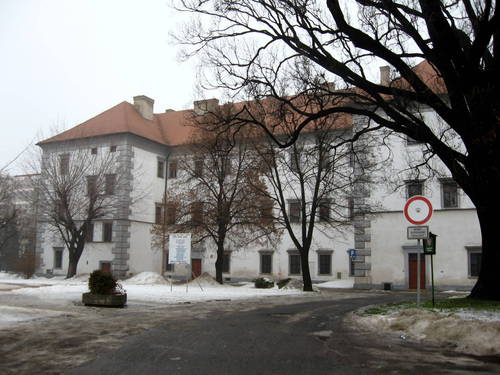 Short walk around a statue, (reminding sorrowful era of the 2nd World War) and Plague Column, can lead you to Old Town Hall of Art Deco style. Its tower-clock which is put into wooden arch, is non-overlooked. The councillors met ther since 1907. At present, there are no offices there but medical consulting rooms. The councillors moved into new rooms of Town Hall, where the respective Information Centre could be found.

A magic of the river, flowing throughout colonized countryside is working everywhere, so, even Lovosice plays no exception in this respect. The banks of the longest Bohemian river are the best places for relax of local persons. Even in winter, the locality is not deserted. The park is popular among people and their dogs or mothers with their children. During summer months, the places along the river are full of people, including those who run there with in-line roller skates. 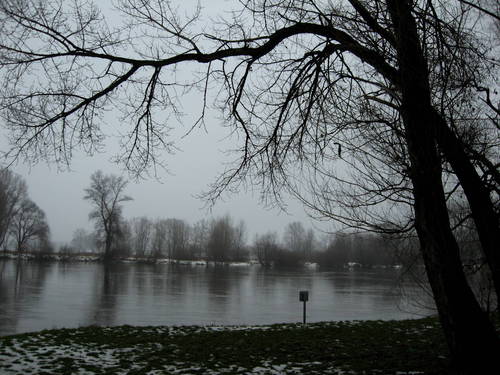 In this border-land territory, the Czech and Germans lived from times immemorial there. However, mutual common life was always accompanied with some squabbles or tussles. Till the time when Hitler got his power, the relations were maintained inside acceptable levels. Everything was solved and settled in calm. Later, the situation became worse. Before the beginning of the 2nd World War, after conclusion of so called Munich Treaty in September 1938, Lovosice became Sudetenland Region and was a part of Third German Reich, and the border town at  Bohemia-Moravia Protectorate at the same time. The nearest Czech-neighbours lived in Terezin. Lovosice had rich industrial potential, and the Germans, as a dominanting nation, lived there. After the 2nd World War, in 1945, the Germans were forced to leave the town.

Published: 15.1.2008
The town of Terezín is situated 60 kms in northern direction from Prague, not far from confluence of Elbe river with Ohře. In 1782 the town was declared ( by Emperor´s patent) as a free King´s town. Fortress of Terezín was established in 1780 by Emperor Joseph II.