The historians do not know, how such strange name of this small border town, placed not far from Louny, came into existence. In due course, they inclined towards the idea, that such name was derived from Latin name of Porta Apostolorum, local monastery of Benedictine Order. But, frankly speaking, the name of a town was known before the time period when the monastery was founded! On the other hand, the words „postoly prtati“ means: repairs of shoes - or - to cobble. So, it was possible that local people let to repair their worn out shoes, who knows? Nevertheless, one fact is obvious: this name wakes the curiosity in adventurous minds and a desire to visit such locality.

Anyway, all consecrated persons would come to Postoloprty with a certain target - i.e. to visit places of so called „Postoloprty Massacre“. This scene was effected a couple of days only the end of war raving, on 3rd June 1945. So called Czechoslovak Units held in prison thousands of Sudeten Germans in local barracks. However, these units put to death all persons, without legal decision. During peace time period when all slowly started to be revived from war horrors, left with phrenetic idea of Fuhrer Hitler, thousands of Sudeten Germans were killed in Postoloprty. The identity of persons was managed in case of 763 exhumated bodies. However, thousands of persons were murdered there. 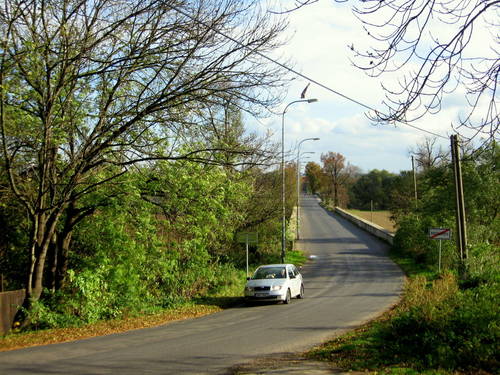 However, thousands of persons were murdered there. Even recently, during 2008, the newspapers announced a message that police finally found two offenders of this massacre. However, both are dead. They died non-punished. On the other hand, revealed memorable plate was put there in 2010, as a very small plaster and reminder what happened in Postoloprty. This fact did not liked many local inhabitants, including Mayor of the town. But, you could have small problem to find it, as no post-finder to show, where the plate is situated. Even the inscription  does not mention concretely Sudeten Germans but is speaking about innocent victims of Postoloprty event.

It is very strange that even town´s web-site, describing the town´s history, a note about „Postoloprty massacre“ is completely missing.

„When the town was seized by Red Army troops, the administration was took over by National Commitee. The imprisonment of local Germans in local barracks caused, under very bad conditions, to many deaths in so called seized camps“. 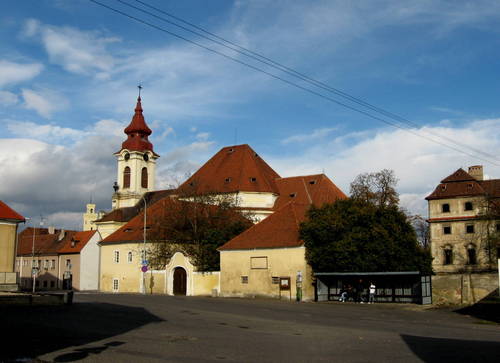 Town Hall building is freshly reconstructed, local church is very boastful, and several houses could be proud on its renovated facades. So, local square looks very nice, from the first point of view. Local castle could be comparable to Nelahozeves castle, as far as its greatness is concerned, is placed just round the corner of Virgin Mary Church, a little in seclusion, probably in place of former monastery.

In past, the monastery of Postoloprty was a seat of wealthy monks of Benedictine Order and its positin was really sovereign. The fame was constructed in accordance with a slogan. „Ora et Labora“ (Pray and Work). As an argument of monastery wealth, the statues, made from gold and silver, were situated in front of the entrance. However, this situation remained unchanged till Hussiten troops came there in 1420. So, the monks removed the statues and put iz aside somewhere, with an idea that the statues would be returned to its original place when this unfavourable period would be over. However, it did not happed so, and famous era of Postoloprty Monastery finished. After Hussiten rage, this jewel of Romanesque style remained in ruins. 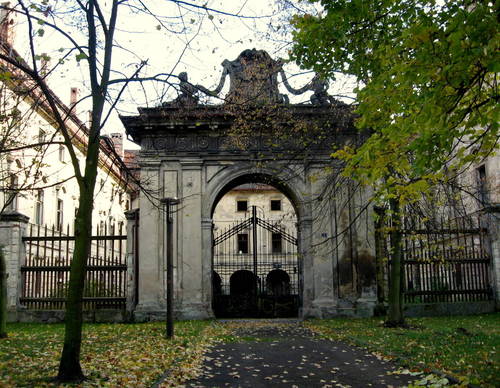 Postoloprty Castle, reconstructed from former stronghold, finished in similar way. The architects of past time period tried partially to renew gone by fame of the monastery. In 1611, Stephen George of Sternberg started the reconstruction of the castle. However, this magnificient work was transferred from one inheritor to another one, the debts increased and the castle fell to ruins. Moreover, in 1768, the building was totally destructed, as a consequence of big fire. At that time period, Schwarzenberg Parentage was the owner, till 1945. Afterthat, the castle served as a depot of State Library of Prague. However, nor the privatization operation in 1989 did not helped the building.

Now, the Postoloprty Castle is reminding more a home of bad witch, playing in one of fairytale studio of Czech Television. This person loves disorder, a lot of weed in the garden, broken windows, wet and all is carefully locked. Nobody is allowed to enter into her strange kingdom. Nevertheless, it is possible to organize wedding ceremonnies in the garden from time to time which is kept in relatively good order.

And how the reality would be?

Old town quarter looks in similar way. Big buildings are in ruins, and nobody is looking after. Most of them is inhabitated with so called „non-adaptable persons“. From open windows, you can listen to a music and children crying at the same time. „I do not like to be mentioned in evening TV news!“ old woman says, on her way home from shopping. „You would go here on Monday, a man was burnt to death here!“ she describes recent event, showing destroyed roof. However, it is not the only one. And this Monday tragedy became a theme of discussion of two persons who met, by chance, on a square. 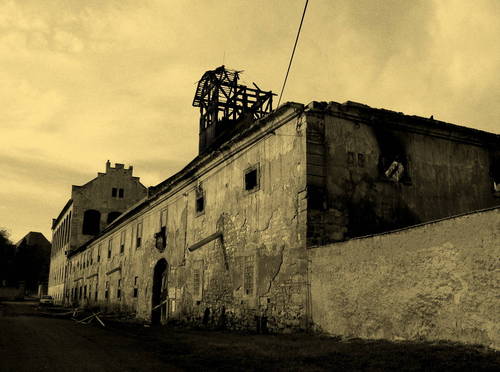 Despite these facts, the town hall management tries their best, to guarantee their citizens their independence on surrounding towns. Local fans have football playground, swimming pool, library, theatre and cinema (movie) or brand shop of Louny Brewery. In the environs, there are fields of hops, maybe, one of agricultural products, which does not lose, within present economical crisis, its importance. It is obvious that Postoloprty has rich, if rather damaged past, and it is worth to visit this locality - along one from many cycling routes or by a boat in Ohře-river, under favourable warm weather.