Published: 4.3.2008
Status-town of Ústí nad Labem is situated in northwestern Bohemia, at confluence of Elbe and Bílina rivers, in Ústí nad Labem district. The name of a town is probably derived from its position – confluence of two rivers. As to written sources, the first notice comes of 1368.

The town is placed on an important railway junction, there is operating also bus as well as trolleybus traffic. Moreover, there is available water traffic. Elbe-water traffic is a connection with a nest of Westeuropean water ways. In town, prevails heavy industry, chemical and foodstuff factories and a glass factory. However, in past there were operating here more companies, but they were closed in the meantime.

The town got its rights thanks to King Přemysl Ottakar II, later

enlarged and confirmed  by King Jan Lucemburský. The town was besieged by Hussite troops, later Jakoubek of Vřesovice became an owner. Anyway, the greatest development reached the town in middle of 16th century, however, 30-years´war noted great decline and population crisis. The town re-started

again with industrial revolution and water-traffic development. In 1867, new brewery was founded, now, it is manufactured here the beer of Zlatopramen brand.

After Munich-agreement, the town was part of German-Sudeten, so part of Third Reich.

You find in town several theatre and choir clubs, chamber-orchestra and other cultural assotiations. As to historical monuments: it is Town´s theatre, church of Virgin Mary, Střekov Castle (its ruin forms an important town´s dominante), Ústí nad Labem Museum, Sun-dial on Lidice-square. In 1908, there was established ZOO-garden. 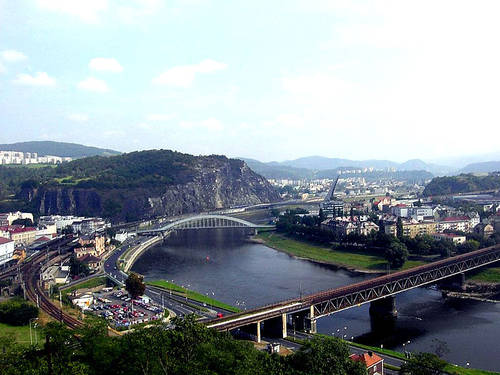