Malá Fatra - Small Fatra Mountain Range - situated in east direction from Žilina, was recently declared as National Park. You find here 900 sorts of plants as well as many animals. This mountain range is divided into two parts. In the north one, there is arising peak of Vel'ký Kriváň (1709 m), very good visible from far distance.

First written notice about Žilina comes of 1208. Originally, the town was developped from a community, which was established as outer balley nearby Žilina Castle. This castle existed till 15th century and was discovered even in 2008. Žilna obtained its town´s privileges in 1290 from Polish town of Těšín. Just in 13th century, there were

constructed here two churches, which exist even today. The first privilege was granted to the town in 1321. Later, in 1378, there was originated complex of law prescriptions, so called „Žilina Book“ and the town followed it carefully. It is an important cultural monument, similarly, as a document of King Louis the Great of 1381, which equalited Germans and Slovaks.

Since 15th century, Žilina established its own fortification, which protected today´s historical nucleus of the

town. This nucleus was declared as town´s protected reservation in 1988. On main square in city centre, there are preserved Renaissance arcades. The square got its Renaissance face  after big fire in 1521. Anyway, the town´s development lasted till the end of 17th century. However, the town was weakened, as a consequence of struggles, and its development moved again just in the second half of 19th century, when the railway connection was effected here. In 1891, the greatest textile factory in Austria-Hungary territory was constructed. This company exported textile products all over the world. Anyway, later,

many other fasctories, shops and banks were built, and the number of inhabitants extremely increased. So, in 1850, Žilina had 3000 inhabitants, and later, in 1910, there was just 10000 persons. At present, Žilina has more than 85000 inhabitants. After 1945, the town undergone a lot of changes. New industrial factories were founded. Since 1960, Žilina is a seat of University. The town is a centre of industry, transport and culture. In 1996, the town became Region seat. Žilina belongs, no doubt, with its historical development, tradition and its

actual life, to most important towns in Slovakia.

Žilina, together with its environs offers for tourists many possibilities, how to spend their leasure time.  Pleasant walks could be effected along foot-passenger zone, this is one of most beautiful in Slovakia. The city centre is formed from two squares. It is Andrew Hlinka Square and  Virgin Mary Square. You find here several historical buildings, which are worth to be admired. It is, first of all, St.Trinity Church, Old Town Hall, St.Paul Apostle Church with a monastery and subterranean spaces, Fatra House of Culture, Synagogue, Rosenfeld Palace, St.Barbara Church and other.

n north part of the town, there is to be found Dubeň Hill (613 m). On Starník Hill (769 m), you find two ski-towages. This hill has best conditions for hanging flights in Slovakia. In west part of the town, you find Velké Hradisko Hill (641 m). On the other hand, in the community of Budatín, there is a seat od Montana Sporting Horse Club, being in charge with horse-parkur jumping, horse-drill  and horse-riding lessons. Various cultural, sporting  and social events are organized  in town during all year round, such as:

As far as the gastronomy is concerned, it is, for sure, sheep-cheese plates and products of sheep milk. 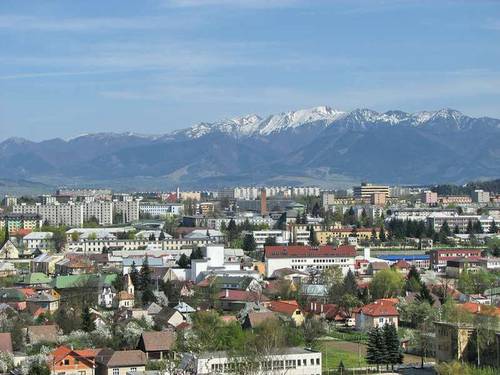