The region of Vysočina is situated  along the border of Bohemia and Moravia. It is neighbouring with the Region of Pardubice, South Moravian Region, South Bohemian Region and Central Bohemian Region. It is one of three inland regions.

Some sources are writing that  here in Vysočina, not far of Stvořidla-pass, near to the hill Melechov, there is situated the geographical centre of Europe.The region is extending in the area of Bohemia-Moravian Highland. To the north you find Žďárské vrchy, on the south  it is Javořice-hills with its highest point of Javořice (837 m).

Both two longest rivers (Elbe and Sázava) belong to the water system of the North Sea.

The water system of Black Sea is interfering by smaller rivers only (Svratka, Jihlava). The region is formed with the districts Havlíčkův Brod, Jihlava, Pelhřimov, Třebíč and Žďár nad Sázavou. The region has been created in 2000 and in 2001 re-named from Jihlava Region to Vysočina Region. Throughout the region is passing the highway D1 Prague-Brno.

The history has left here many  monuments, three of which are

put down to the List of World Heritage UNESCO. As the first it is the historical centre of town of Telč, it is worth to visit, the other is monastic church Zelená hora, near to Žďár nad Sázavou and consequently the Jewish Quarter in the town of Třebíč.

In the region there is the machinery, textile or foodstuff industry. The local agriculture has extremely favourable conditions for the production of milk, potatoes and rape-seed. You can find here also very extended forests. 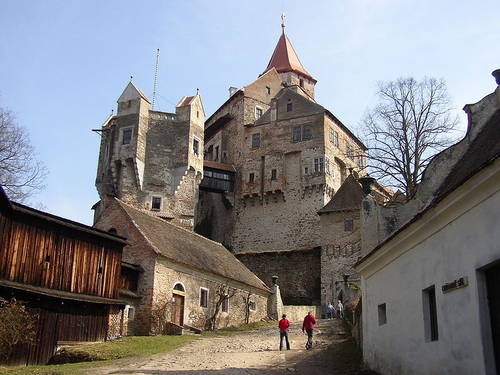