The region of Vysočina is situated  along the border of Bohemia and Moravia. It is neighbouring with the Region of Pardubice, South Moravian Region, South Bohemian Region and Central Bohemian Region. It is one of three inland regions.

First written notice comes from 1315. Anyway, the big swing got the town under rule of Zacharias of Hradec. The town received its form and kept it for

a period of centuries. In 15th century Telč was occupied by soldiers of George of Poděbrady. He confirms in 1464 the old privileges, together with the right for beer-breeding and selling and salt-selling. In 1386 as well as in 1530 a big fire broke out which destroyed houses on a square including St. Jacob Church. In 1551 and 1681 a plague epidemies decimated the town.

To town´s history belong Hussites, troopes of George of Poděbrady and Albrecht of Wallenstein as well as  an invasion of Swedish and Napoleon troopes. In 1970, the historical nucleus was declared as a Town´s Preserved Reservation, and on 13th December 1992 Telč was registered in UNESCO Survey.

Historical Monuments and Tips for Excursion:

Castle – a big Renaissance complex  with unique interiors and decorations attracts your attention with its valuable collections and era´s equipment. You

can also visit a museum with its exposition about town´s history. Further important monument: square of Zacharias of Hradec with unique citizens´  Renaissance and Baroque houses. On a square, you can admire two fountains, Column of Virgin Mary and Parish Church of St.Jacob with a massif tower of 14th century. The oldest monument coming of 13th century is a Romanesque Tower of St.Spirit. To this tower belongs a Neo-classical church. It is worth to visit the Church of Mother Virgin Mary in Old Town and a former synagogue of beginning of 19th century.

The nature surrounding the town is suitable for walking as well as for cycling tours – there are several ponds available and well signed tourist paths. 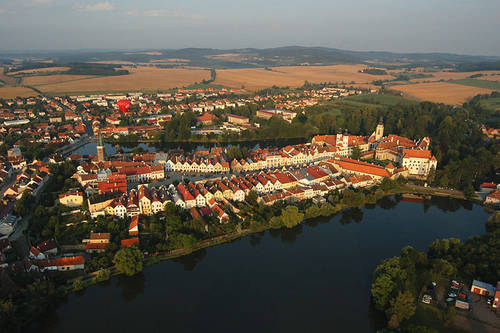 Published: 30.6.2016
Cesky Rudolec chateau is called Mala Hluboka. It is situated by the road No. 409 in the southeastern corner of Cesky Rudolec village near Dacice in Ceska Kanada nature park. This area was settled for the purposes of iron, silver, and precious metal mining. This perhaps explains the name of the village – Rudolec.