The region of Zlín  is situated in the Eastern Moravia . It neighbours with the Region of South-Moravia, Region of Olomouc and  Moravia-Silesian Region.

The essential part of this region form hills and mountains, as to orography, belongs to Carpathian Mountains. Three big rivers are passing thourg this area – these are Morava, Bečva and Olšava.

Most of the region cover Protected Natural Areas Beskydy and Bílé Karpaty (30% of region approx.). The  protected area of Bílé Karpaty belongs to the other five bio-spherical reservations UNESCO in Czech Republic.

The town of Zlín

Zlín is important  business, cultural and industrial centre of East-Moravia. In the town is living 59048 inhabitants. You can find numerous schools in the town. However, the railway as well as roads nest is not much develepped. This has a reason in the 2nd World War and collaps of Czechoslovakia  Zlín became a frontier area and the development of traffic nests came to the margin of interest of central organs.

The area of this region is margined by districts Zlín, Vsetín, Kroměříž and Uherské Hradiště. The region was created  in 2000. In years 1949-1959 the region was much more bigger. Its name was Gottwaldov Region, involved  the district of Hodonín and parts of district  of Přerov. In 1960 this region was cancelled and  area divided between South-Moravian and North-Moravian region.

In region of Zlín you can find  the finishing industry, metal industry, electrotecnical as well as rubber industry.

As to the economy – the region belongs to those less developped ones. Many companies and enterprices bankrupted in 90-ies.

In the territory of Zlín region  you can find many interesting places. This is – for instance so called Channel of Baťa -  the inland canal Otrokovice – Rohatec, created in 1936-1938.

This water road is open to the public now.

The other interesting place is Ploština: The glade-community is situated in a space where operated the 2ns Partisan brigade of Jan Žižka. On 19th April 1945 this community, helping to partisans, the fascists burned down and 24 citizens murdered. There is a monument on this place now. 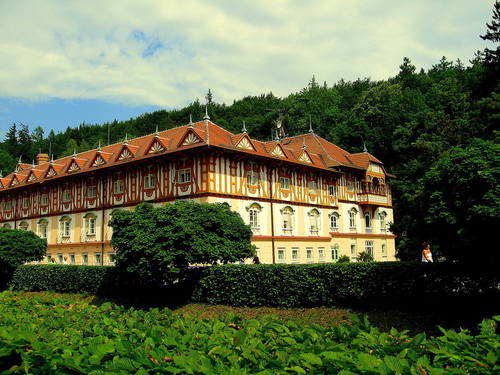