í hrádek is a ruin of Gothic Castle, situated in distance of 5,5 kms approx. from the town of Tábor, and 2,5 kms from Sezimovo Ústí. In past, Mister Jan Huss lived here for certain time. Thanks to Nejedlý delight in Hussite era, Kozí hrádek was declared as National Culture Monument on 30th March 1962.

hen the castle held Vlček from Kozí. Since summer 1415, Mister Jan Huss stayed here, invited by Jan of Ústí. He preached here and wrote his works, finishing important Postilla Work and other books.

Later, he left Kozi hrádek and went to Krakovec Castle (Rakovník district). In October 1414, he started his last way to Konstanz (Germany). Here, he was, owing to his ideas and opinions, sent to the stake, on 6th July 1415 and died. Uncovered ruin of Kozí hrádek Castle was investigated carefully during first half of 20th century. After 1970, the castle was again in care of experts, and after reconstruction works, made on rests of walls, including surrounding terrain, the ruin is to be found in good condition and it is open for public. 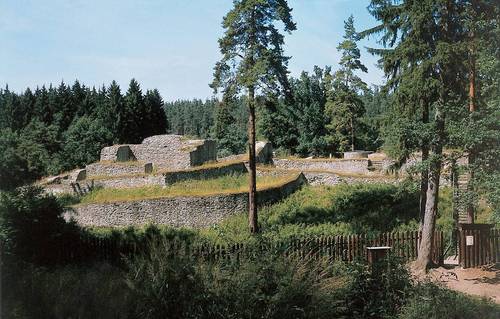