The town is situated in Košice basin and it is surrounded with Slánské Hills and Šariš Highlands. Two rivers - Torysa and Sekcov – flow through Prešov. The town has 91 thousands of inhabitants and it it the third greatest town in Slovakia. 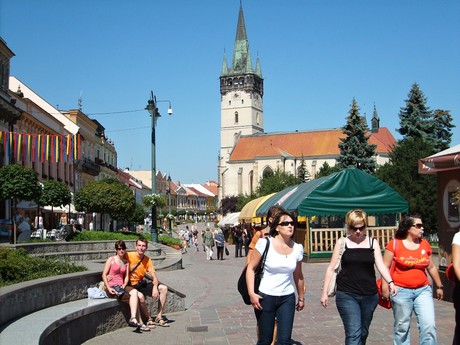 The archaeological findings refer to the fact that Prešov was colonized since older Stone Era. Nevertheless, Slavonic colonization is dated since 6th century A.D. In 11th century, the territory was included into Hungarian Kingdom. The inhabitants started to mix with coming groups of Hungarians, and on break of 12th and 13th centuries there was added into ethnic composition of inhabitants even German element.

In 1299, Prešov obtained a status of King´s town. This fact helped a lot for its future development. Good fortune of Prešov was consisted in a fact that the town was located on crossroad of merchant ways, which connected, first of all, Transylvania including Galicia and south areas of Poland. Nevertheless, the business became most important source of income. So, the wine was main imported commodity, buyed from Tisza region into Poland. The merchants brought here linen, lead and furs. 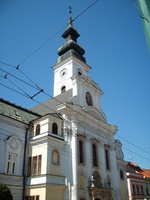 In the course of anti-reformation in 17th century, the town considerably weakened in economical as well as in human level. In 1617, there lived here 3600 inhabitants, and, hundred years later, 2000 people only. Even ethnical composition of population was mixed - Slovaks, Rutherians, Poles and exulants (after lost White Hill battle from Bohemian Crown Countries) arrived here. There is one interesting matter to be stressed: at the beginning of 18th century, in consequence of people´s decrease, the town offered to everybody free of charge a house, citizen´s rights and tax-liberation, who was ready to stay and live here. Anyway, industrial revolution came slowly into the town. After great fires at the end of 19th century, extended reconstruction movement started. There were built many administrative public buildings (Greek-Catholic seminary Alumneum, girls´ institute Sancta Maria or Jewish synagogue), including new streets (Vojanského or Pilsen street).

After creation of new state formation in 1918 (on ruins of Habsburg monarchy) - i.e. Czechoslovakia – the town of Prešov became part of this. Nevertheless, one year later, in July 1919, there was created Slovak Republic of Councils, as an autonomous part of Hungarian Republic of Councils. However, this state formation was in function for three weeks only. After February 1948, there was started socialist building construction, industrialization and collective ownership – factories were built, the employment increased and new flats were constructed. However, all the property was nationalized, and civil liberation was limited, not only for capital profit. The population increase followed, in 1950 there lived here nearly 23000 persons. Twenty years later, there was 55000, and finally, in 1989, more than 80000 persons.

At present, is Prešov, thanks to stabil economic increase of Slovakia, the town is in development. Many building projects, such as hypermarkets, shopping centres, swimming pools, hotels and inhabitating houses, are being constructed. 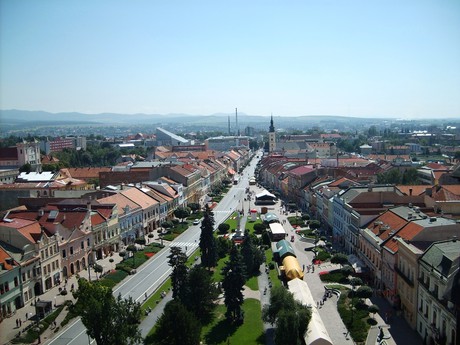 Neptun fountain: is the oldest fountain of the town. It was built in 1789 as a gift presented to the town, from Mark Hollander, Jewish merchant. The statue was made by Vincent Staviarsky, sculptor of Košice.

Calvary: this Baroque complex is a dominanta of west part of the town. It was created within 1720-1769 from means of donators (from the very beginning, it served as a cemetery). The whole complex of Calvary is formed with St.Cross church, fourteen small chapels of Cross Way, small chapel of Saint Staircases, catacombs and neighboring cemetery.

St.Nicholas Cathedral: the basis of monumental cathedral (the building is 55 metres long and 24 metres wide, with a tower, 71 metres high), is situated on place of older building of 13th century. The construction of cathedral itself could be divided into several parts. The first stage was effected in the middle of 14th century, when the church was built. The second one was realized after big fire in 1418, when the works were stopped for certain period, and continued within 1420-1440. So, finally, at the beginning of 16th century, there was started the third stage, the task of which was the unification of stylish incoherent complex. The builder Jan Brengyszey  continued in this building work within 1502-1515.

However, after two big fires (at the beginning and at the end of 18th century), the church had to undergone several reconstruction works, which pressed the buildings partially Baroque face. Anyway, the final arrangements were made at the beginning of 20th century, when the tower undergone „Gothic face“ and some interior changes were made.

Protestant Church: on 1st May 1642, there was put basic stone of Protestant church. The Jesuits Order consecrated it to Holy Trinity. This buliding, made in late Renaissance style, was terminated in 1647. Inside, you can find choir tribunes, along both sides. The pillars of church navy are decorated with rich profiled cornice heads. Nevertheless, the church preserved its late Renaissance face until now. The building undergone the reconstruction in 1850 and 1947. The inside church equipment comes partially from 17th century. Neo-Romanesque main altar has – in the middle of pillar architecture – picture-copy pf Jesus Christ and Samaritan nurse. However, the original of the picture was destroyed during big fire in 1913.

Protestant commitee: the construction was started in 1666 (year of magic number). Despite disputes with monarch, the building continued, with rich financial donations and supports of Hungarian Estates. New school was contributed by Protestants from Transylvania, Netherlands, Poland, and some gifts gave Swedish King, Danish King and Saxonian Prince. In October 1667, the school was solemny opened. At that time, it was three-wing one-storey building with a courtyard in the middle, closed with a wall and a gate on its south part. Below all buildings, there are cellars with late Renaissance vaults. This school obtained good reputation abroad. However, this fact caused indignation of ruling family. In 1673, the school was handed over by Jesuits Order, and onehundred and ten years later, the Protestants obtained the school again.

County House: till 1769, two stony Renaissance two-storey houses were situated on place of today´s house. With its connection during 1769-1770, there was established representative administrative building of Šariš County. Its front side is symetrically divided, and two entry stone portals are formed in this way.

Immaculata Statue Group: this statue group from sandstone was erected by unknown Master in 1751. Its base was added with four Saints, however, only Saint John Nepomuk  and Saint Nicholas were preserved up to now. Anyway, this staues-group dominanta is formed with Madonna (Holy Virgin) with Child holding gold crown and sceptre.

Statue Group of St.Rochus: this statue group was erected on free place in front of Francescan Church in 1733. On a top of wealthy divided column with relief of cave, there is placed upright figure of St.Rochus. On three-cornered base, there are pictured plastics of St.Sebastian, Anthony of Padova and John Nepomuk.

Church and Monastery of Franciscans Order: at first, it was a church, consecrated to Virgin Mary, later Holy Trinity. The monastery was built in 1380. In 1559, the Carmelits left this place, and their property got the town. Anyway, in the second half of 17th century, the church with monastery was  handed over, as a gift, to Franciscans Order. They effected reconstruction of the whole complex in 1660. The building complex was bordered, along north and south part, with stone wall. Anyway, 20 years later, the place was devastated, and most important reconstruction was effected at the beginning of 18th century. The reconstructions were made also later, within 19th and 20th centuries.

Town´s fortification: only small rests were preserved until now (the fortification was demolished in 19th century). Nevertheless, even today, you can follow its former route, according to a form of neighbouring terrain, and in destination of original bordered streets. On east part, there was preserved water moat. On north-east part, there remained two-storey bastion with loopholes (originally, it was connected with internal ramparts). In central part of western fortification, there was preserved small gate, known as Florian Gate, protected with bastion.

Town Hall: building of town hall is a result of many building arrangements. At the end of 15th century, the house was in possession of Peter Moler, painter. At the beginning of 16th century, the house was changed into town´s wine-cellar. In the course of 16th century, The building was enlarged again, and continued to serve as town´s wine-cellar. Nevertheless, in the second half of 18th century, the object was marked as town hall. After big fire in 1788, the building undergone big reconstruction again, where a balcony was added. From here, there was declared Slovak Republic of Councils on 16th July 1919. 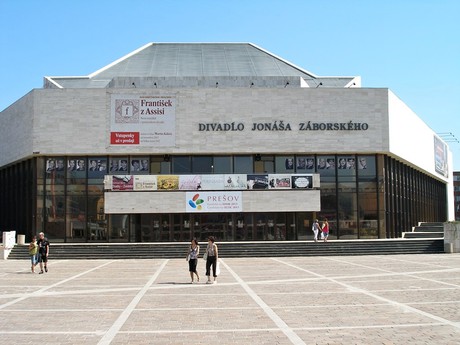 Regional Museum: this educational museum was established in 1945 has its seat in Rakoczi Palace in city centre. You can see many interesting expositions, such as historical weapons, history of Prešov since 9th till 19th century, historical families or farmers´ housekeeping.

Wine Museum: the interiors of museum are situated in ancient two-storeyed cellars below town hall. The visitors  receive the information regarding wine - how it is being worked, the ways of its presentation and right ways of tasting. This exhibition is not specialized for Slovakia only, also for Moravia and other regions all over the world. So, tall collection is formed from more than 1500 wine-sorts.

Jewish Museum: this museum was established in 1928 as the first one in Slovakia. In 1931, the museum started to be acted in spaces of so called water bastion „Kumst". It is a merit of Eugen Barkany and Theodor Austerlitz. Both men have the deserve of its foundation. They collected several hundreds of objects all round Slovakia and numerous gifts from abroad. However, the museum had to stop its activity within 2nd World  War. Anyway, there was no interest in re-opening of this museum, when the war was over. So, finally, at the end of November 1993, a part of collections was again open for public.

Šariš Gallery:  its seat is located in 400 years old house of Renaissance style. The galley was founded just in 1956 as Regional Gallery. First exhibition was organized one year later. In 1991, the gallery was re-named on Šariš Gallery. It belongs to oldest regional galleries in Slovakia, looking for works of artists of  East Slovakia. 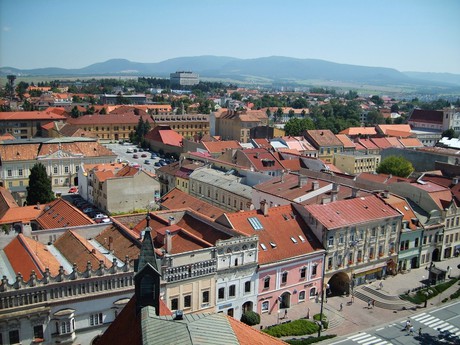 Published: 15.7.2010
The town of Vranov nad Topl'ou is situated in east part of Slovakia, in Prešov Region. It is an administrative as well as economic centre of the district, with cultural and relax backround.