Imagine that we actually know that, although nothing is kept of it! The Jewish ghetto in the Old Town was situated between today's streets of Kozi, Siroka and the Vltava River. The oldest part was founded in the 10th century around what is today the Spanish Synagogue. Before, on itsp lace, used to be the Old School until the 19th century. Another part of the ghetto can be seen on the rest of the territory, separated by walls and gates. Interestingly, there were two separate locations that never joined. Among them was the Church of Holy Spirit (Dusni Street). However, how it really looked there we may see on the famous Langweil model, which is exhibited at the Museum of Prague (Na Porici 52/1554). From this model and the few surviving paintings, we know how romantic it was: the area here was very densely populated with buildings, the streets were narrow narrow and wavy courtyard balconies, small sheds in the yards and mostly plain facades. Unclear scrum of spontaneously built, fires of destroyed and restored buildings.

Due to the poor condition of the buildings and poor hygienic conditions back at the beginning of the 20th century, the whole Jewish quarter was sanitized and new beautiful houses were built in its place, arranged along wide straight streets. Today we call this an "unfortunate event," as the deanation took place without archeological surveys, and even without systematic documentation.

What is left are the synagogues. Let's go and see them. 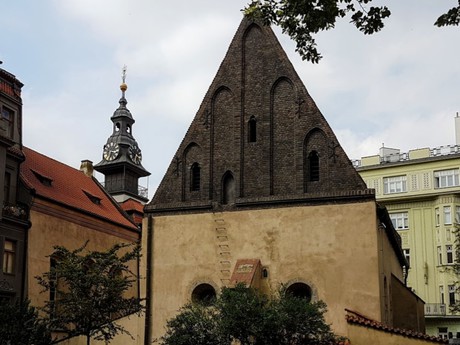 The oldest synagogue north of the Alps was probably built at the end of the 13th century. To date, it is used by a Jewish community, inside you will see evidence of both the antiquity of the whole building and its current use (name tags on benches). You will see the Gothic vaults, the stone Gothic/Renaissance aron ha-kodesh (sanctuary) or Hebrew inscriptions on the walls. The synagogue does not feature a female gallery; women view worship through small windows from the wing. The famous scholar Maharal, Rabbi Jehuda Liwa ben Becalel, was also known among the lay people, especially as the creator of the golem, an artificial creature serving the one who revives it. At the Old Synagogue, the golem hid. Even if you find it, it will not do anything for you. To recover it, you need a bold, mysterious Kabbalistic formula that you put into the gut.
Well, let's go.

Close to the Old Synagogue, the Old Jewish Town Hall stands with its picturesque tower. On the tower, there is a clock with Hebrew numbers the hands of which move in the opposite direction. The building of the High Synagogue, where you can visit the exposition of synagogue textiles, is adjacent to it. 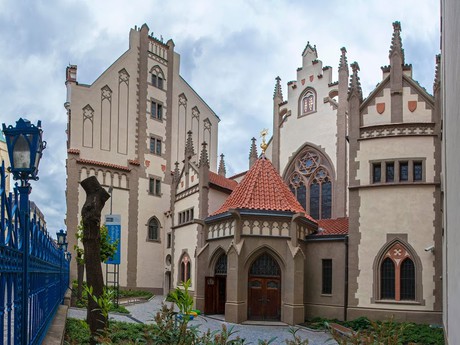 A prominent, beautifully reconstructed Maisel Synagogue is located at the corner of Maislova Street. It was built at the end of the 16th century a the private synagogue of the primate of the Prague Jewish town Mordecai Maisla. After several fires and renovations it received its present neo-Gothic form. Inside, there is the permanent exhibition of "Jews in the Czech Lands, 10th-18th Century". At this exhibition, you may see the ghetto on Langweil's model, a 2D projection. On touch screens, visitors scroll through old historical documents, Hebrew manuscripts and plans, or they may read through lists of important Jewish personalities. In the evening, chamber music concerts take place in the synagogue. 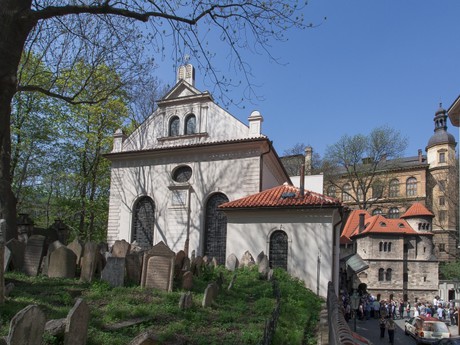 Klausen synagogue, the largest synagogue close to the Old Synagogue, in the Old Jewish Cemetery compound. It is called by houses, the so-called klausen that stood in its place in the 17th century. It was, among other things, the renowned school for the study of the Rabbi Loew's Talmud. Today, the synagogue features a permanent exhibition of Jewish traditions and customs. 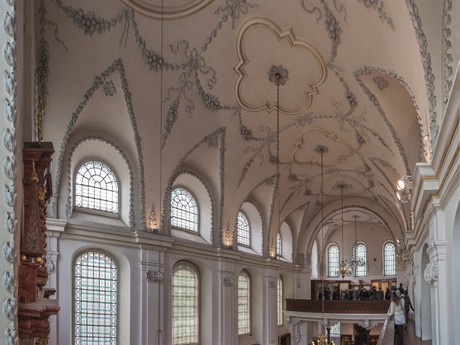 It stands at the opposite end of the Old Jewish Cemetery and it is home to the Shoah Memorial.

The inner walls of the synagogue describe the names of the Jews killed in the Second World War. The synagogue was built as a private building at the beginning of the 16th century. Approximately 40 years ago during the archaeological exploration, a historical mikve was found nearby, which is connected with the synagogue by a passage (not accessible to visitors). 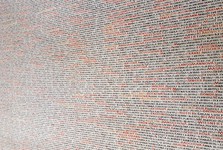 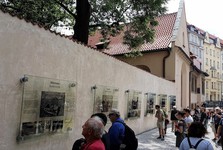 The beautiful interior of the Spanish Synagogue is a popular concert venue. The synagogue was built in Maori style only at the end of the 19th century. There you can see a collection of rare silver items and documents and articles related to the history of the Jewish community in the 19th and 20th centuries. 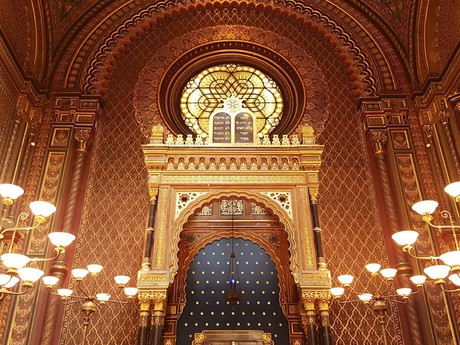 Why the Name Josefov?

Restricting laws, decrees, and measures, the effect of which was intolerable persecution of the ghetto was alleviated only by the englightened government of Joseph II. He allowed the Jews to settle anywhere, to acquire property, to attend public schools and, above all, to be engaged in a range of professions which had been ban to the Jews until then. The territory of the old Jewish quarter was named Josefov in 1850 to honor the monarch.

With many historical sights and with the past and present of the Jewish community in Prague, the Jewish Museum in Prague is the main source of information. When visiting Prague, you must see it.