spring (source):
The river is created by confluence of Modravský and Roklanský potok (brook) in an altitude of 978 m of sea level.
flow length:
12 km 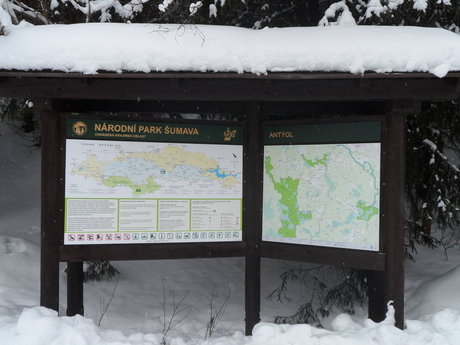 Path across the Povydri Natural Park from Antygl leads to Cenkova Pila (7.5 km). In about the middle of the route you will discover Turner’s Cottage built on a cliff. Both places have plenty of parking space. Cenkova Pila was maintained during winter and the entrance is for free. If you go from Antygl , you have to follow the direction of the river Vydra. The terrain is flat or mildly descending. Here the river flows in an area with many boulders, it is several meters wide and creates giant pots, which are variously large holes in the bottom of the stream. At the same time it erodes huge boulders into different shapes. Add to that thickly wooded, rocky valley, white blanket of snow and silence ... It is a romantic setting like in a fairy tale. The only thing missing here is a a prince on a white horse.

Who takes this path in the summer, do not forget to keep in mind that bikers are forbidden to enter. In winter, there is a two-way ski trail. Sometimes along the middle, there is space designated to winter tourists. 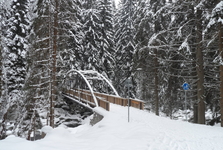 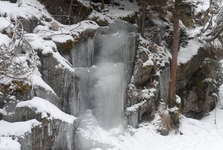 Turner’s Cottage , a stylish wooden cottage stands on the former site of the cabin, which had already carried this name after the pathfinder, who, according to historical materials, contributed to its construction. As every building of its kind, it has its own history. This one started in 1864. Today's appearance originates in years following 1938, as the cottage burned down before the Second World War.

In its wooden interiors your company would be tamed otters and other animals. The owners of the cottage serve their local specialties. You can feel like at the home in this environment. It looks like water beast does not even mind that it is trapped in a cage. People are not afraid to take pictures and the otter poses like a true lady. Every morning before guests arrive, it is removed from the cage and runs all the spaces and "helps" when cleaning.

If you did not book a bed in Turner’s cottage, continue then to Cenkova Pila. However, you have to secure a ride back to your car in Antygl upfront. l. (As another option of accommodation is Antygl autocamp.) Cenkova Pila is known for its original and still operating power plant and Vydra. There CEZ, a power company, introduces its permanent exhibition Sumava Energy. 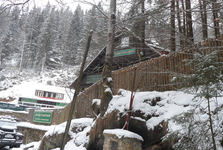 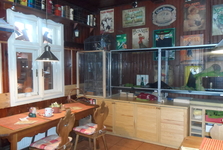 Published: 22.2.2008
The district town of Prachatice is situated on Živný brook at foot of Bohemian Forest in South Bohemian Region. The town was founded on merchant „Gold Path“ probably on place of today´s community of Staré Prachatice (Old Prachatice). New town of Prachatice was established at the beginning of 14th century, together with a church of St.Jacob on a square.