So, we put on our cross-country ski on Saturday afternoon in Bedricov. We took on our backpacks with snack adn set out to the first winter trip in good mood. Nova Louka, Herbinek and on were the places we intended to reach. To our benefit, we were very patient and it would turn out later how needed patience would be. It snowed heavily at night so cross-country ski were in perfect condition for both the classic  as well as skating style. Many other people had the same idea of taking out their ski even though the weather was not particularly favorable. 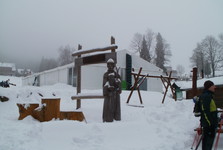 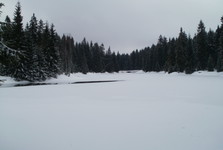 Cross-country trails around Bedrichov are open to everyone. You don't have to be particularly fit for most of the tracks are suitable for less experience skiers, or families with little children. However, the people should be more disciplined and watchful. Our group joined a stream of visitors and moved in a large crowdn along the Jizerska Magistrala track. The trakc is really wide with two directions in some sections. Despite that collisions are frequent. At U Buku crossroads, mere 2 kilometers from the start of our ride, we turned left to Nova Louka. At Nova Louka crossroad we turned left again and followed Vladni Cesta to Vladni crossroads. From there we moved on along Jizerska Magistrala in the direction to the right until we reached Za Prehradou crossroads. There we caught our breath, rested for a while as we were tired of riding in a crowd. We joined a fresh track along the Cerna Nisa nature trail. We were eternaly grateful to the person who rode through the snow here the first. And finalyl we could enjoy the nature around and the silence. 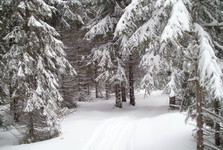 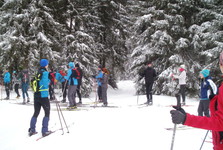 3 kilometers down the route, we met only two does until we reached Hrebinek. Againt, it was crowded, endless lines in front of the food kiosk. We rather took something from our own supply. Then we set out to Tocna. At Tocna crossroad the fittest of us joined a track following the Holubnicka trail. Those of us who were tired would further follow the Jizerska Magistrala, to be more concrete the Nova Cesta track. It was less crowded  which allowed us to finally enjoy great, maintained long stretches of the track as well as long descends. Holubnicka Cesta would later join our track. Our two groups would join and together we would  ride towards Kristianov. At Kristianov crossroad we turned right, passed Tetrevi Kriz and stopped by Blatne Lake. It was frozen. 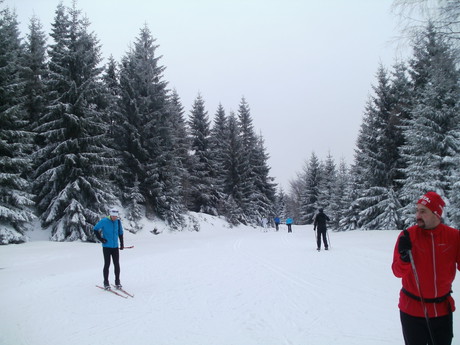 As the idea of food at Samalka cabin by Nova Louka had been growing larger, we rode up a short hill. The restaurant was full and the line twirled long outside the cabin. So we jsut visited the restrooms and moved on back to Bedrichov. We had to watch out constantly and avoid any colision especially when passing groups of rather physically unfit skiers. They occupied the right track and the all space left for passing. Even though there is no steep section at the bottom of the slope (as most ski slopes are rather long with the flat finish) and snow was icy, there were many fallen skiers. To avoid cross-country skiers on the ground was like a genuine obstacle course. 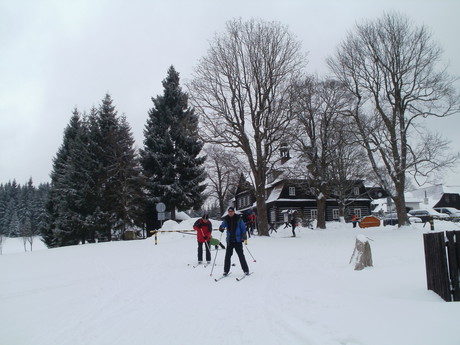 Eventually we got back to the outskirts of Bedrichov. We rode below the rope park and  headed to our favorite Dolina cabin. It didn't disappoint this time either. However, we had decided that we would either wake up earlier on the weekend or set out to night skiing with headlamps.

Published: 28.1.2022
The unmistakable and easy-to-spot dominant of the North Bohemian landscape is one of the most visited places in the region. And this holds true in every season. The summit is easily accessible by cable car, a network of hiking trails and abundant curves of the asphalt road. Upstairs you will be amazed at the view of the entire northern half of Bohemia, as well as the unique multifunctional rotary hyperboloid building. It's Jested.