You can make quite good cross-country ski treks from Semerink. If you were accommodated in Janov nad Nisov, take a ski tow up to the top of Severak (804 m). The box office is on the other side of the hill. But fortunately the guys at the ski tow let us take a rid uphill. Then we rode mild slope downhill, carefuly rode under small ski tows of Kampa I and Kampa II (the slopes are very easy around these skitows so even inexperienced skiers can do it), then we crossed a road from Slovanka observation tower, and were headed in northwestern direction toward forest nearby. There we joined a cross-country ski trail. 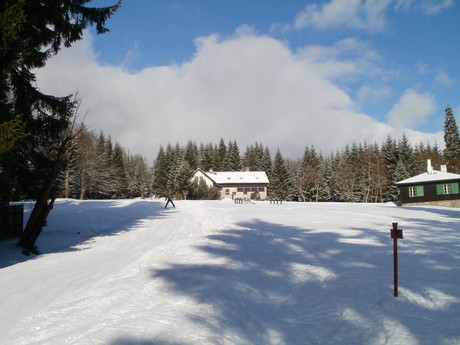 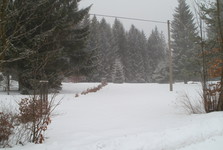 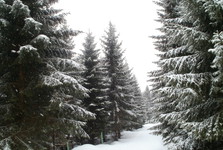 We didn't have any exact roadplan. Had we ride to the east, we would reach Slovanka observation tower. Yet the condition of snow was great so we decided to continue in northwestern direction to Proti Arnice I and II skitows. Soon we reached a huge parking lot and U Kaplicky bus stop both in Hrabetice. It was easy then to ride downhill from here along snow-covered road (motor vehicles are usually not allowed to ride through there). toward Josefuv Dul water dam. We crossed the dam and at its end joined the Jizerska Magistrala, consequently turned left to Kristianov, passed U Hlubokeho Potoka signpost and turned one more time left to the tombstone of Pitelka. Here we turned right, followed a frozen stream, and ride uphill to Kristianov. then we turned left, followed Tetrevi Kamen and rode downhill to Blatny Pond. 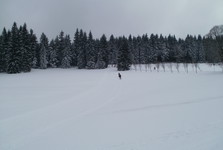 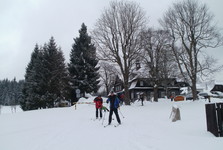 You can eat something in Samalka, Nova Louka. The pub is, however, quite crowded and you have to wait till you were seated. On cabin's other side, there are some seats outside next to a stand. Then you ride downhill from Samalka to Blatny Pond. From here you may go along the other side of water dam and see Kralovka and Prezidentska cabin. We wanted to go exactly there, therefore we turned right to the Cerveny stream. 350 meters in, we went off Jizerska Magistrala at a crossroad by Blatny Pond. Then we followed in southewest direction a beaten trail along beautiful, flat trail. There were mild curves along the trail. Yet it was not foggy and no signs of a snow storm. It seemed, moreover, that we had been heading in the right direction. So we enjoyed our ride in the  Jizerske Mountains. Soon we reached Valesovka crossroad, there we again joined the Jizerska Magistrala. Then we turned left to Pod Prezidentskou chatou crossroad. From here we had to overcome quite long and eventually steep climb towards Prezidentska Cabin under Nerkas mountain's peak (859 m). As the weather worsened, we enjoyed being inside cozy restaurant with friendly staff. We stayed there for a while. 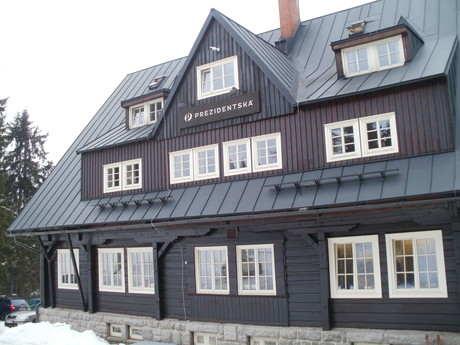 Minding bad weather we gave up on visiting Kralovka observation tower. We rather hit the road back and climb the last 300 meters to reach the peak of the hill. Then we enjoyed long downhill ride to Hrabetice. As there was not enough of snow to allow us to go to Semerink by following pedestrian tourist trails some of us moved back to our guest house. They had to go over Severak hill and then ride down the red difficulty slope. Those less fit either took off the cross country-skis or traveled by bus to Hrabetice.

Published: 2.3.2010
The town of Desná (Jizerské Mountains), ensnared with its famous and sad past, is known (similarly as Prague) as the Heart of Europe.