Existing ski resorts do expand every season. They offer better services not only to experienced skiers but also to families with children regardless what they like to downhill the slope with. Our staff would most likely pick the region of Bozidar and the near resorts at Klinovec and Plesivec as the best places.

Klinovec (1244 m) is the highest mountain of the Ore Mountains . The observation tower on the top of it literally raised as the Phoenix. It is whole year open. The 360 view is unbeatable when the weather is good. On the horizon, you can see Jested, Rip and 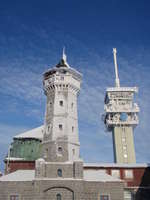 Most skiers want to arrive with their skis just at the bottom of the ski slope, or maybe on the top of the ski slope. This is possible at Klinovec as the parking lot is on the top. It can allow you to downhill any ski slope. What is most likely is that you will chose the best thing for skiers located in the south side – a freshly opened 3 km ski slope with 500 meters of elevation and the width of 500 meters. Such parameters make it one of the most beautiful and the longest ski slopes in the Czech Republic. It is of “red” difficulty. On two parts of the slope are of “blue” difficulty. The cableway that would get you to the top is new as well. It is 2400 meters long equipped with the so called “bubble”. When you get in you shut a plastic door that would cover you from wind and snow. Similar cableway operates o Parezovka, on the opposite side of the hill. Klinovec operates 7 ski tows and 4 cableway altogether. In addition to it is a snowpark, jumps, and obstacles. The children skipark includes a ski school with child minding. There are two 110 m moving strips. Out of 18 kilometers of ski slopes 90% is covered with artificial snow. New addition is a reservoir connected to the most powerful snow cannons. 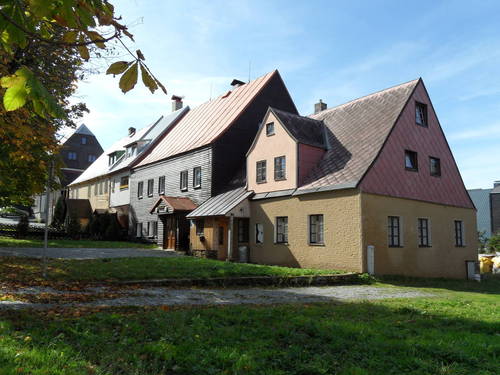 But there is much more to do on Klinovec. A skipas bought on Klinovec will make you eligible to ski even in Fichtelberg, Germany. A skibus would take you there from the top of Klinovec. It will take only ten minutes. At Fichtelberg, there are 10 ski slopes of various difficulty and of total length of 15 kilometers. It also has a cabin cable way and an adequate number of ski tows. There is also a bob sleigh and an ice rink.

Plesivec (1028 m), another near mountain, is easily accessible off Abertam. You can get by car up to the top where you can park on a large, free parking lot in Pstruzi . A ski tow with individual seats for four people operates there. It is one of the three. There are 12 kilometers of ski slopes . The slopes are 100% covered with artificial snow. In addition to that there are modern ski tows, and a playground with moving strips and ski tows. This would ensure that your vacation will not be boring. There is a hotel, an observation tower, and a cozy restaurant on the top of Plesivec. Nearby are also three restaurants, four bars, a snowboard school, and ski equipment rentals. Buses of the ski resort will operate within the compounds, except regular buses the stop of which is right on the parking lot. The ski resort’s buses will transfer people from Karlovy Vary , Ostrov, Horni Blatna and other towns. 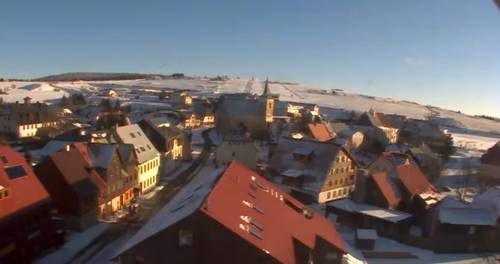 Bozi Dar is a town that can really exploit its tourist potential to the fullest. Every house, every pension is ready to accommodate tourists. There is a large parking lot, near ski slopes, and more than 100 kilometers of cross-country track. You and your skis wont hinder anybody here.

For children and beginning skiers Novako resort is ideal. It is located right in the center of Bozi Dar. Ski equipment rental, and a refreshment bar are at the center. You can put children of two years of age or younger to a ski kinder garden. They can have fun on a playground or do some snowtubing. This year, a new ski tow with lighting for night skiing is open in near ski resort of Hranice. 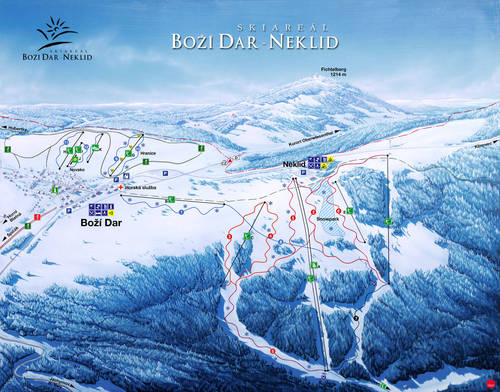 On the way to Klinovec, couple of hundred meters from Bozi Dar, a parking lot at the upper part of the ski resort of Neklid (1100 m) is located. It offers 5 ski slopes, a snow park with jumps, obstacles, and snowkiting.

The best thing is that you do not have to worry about the equipment from your home. There is a number of ski and snowboard rentals. You can get complete overview of events around at infocenters. Also, you book accommodation there, rent equipment not only skiing. Also you can rent a snowmobile with a full tank, protective helmet for you and children. The rental would include instruction how to run the snowmobile safely. Do you know what a ktrak is? Ktrak is a snow tracked vehicle you can use to ride slopes or special trails. Except a ktrak, you can borrow there a kickspark – a Scandinavian snowscooter. The principle is the same as with a classic scooter. You just get a shoe grip to fend off and you go! Or will you try dual snowboards? You are free and fast with small boards unlike with a classic snowboard. All the experiences of attractive vehicles, skiing, beautiful mountain nature could be recorded on a small and light GoPro video camera. You can also borrow it. At home you can then play your recorded experiences. 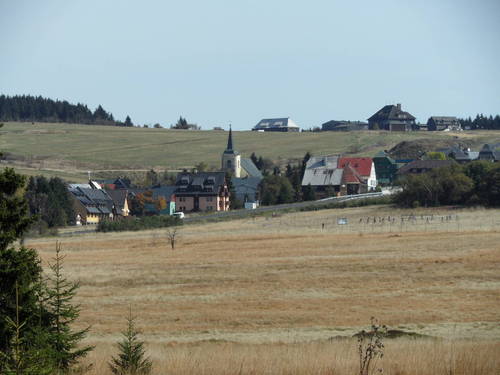 There are more than hundred kilometers of cross-country trails around Bozi Dar, Klinovec and Fichtelberg in winter. Today, Jeziskova Track with thirteen stops along its thirteen kilometers is quite famous. You can make your skiing shorter to 5,5 kilometers. When the children see stops with elves and their funny tasks, sure they would not hurry home. the tracks go along summer tracks and sometimes through places impassable in summer, e.g. marshlands. In winter, you would see new views of mountains and the landscape. Go to the Hrebecna, around romantic ruins of the Haj limeworks. This place is enchanting in summer and in winter. Perhaps, you encounter Lukas Bauer training. The 8km long cross-country track Bozi Dar – Oberwiesenthal bears his name. 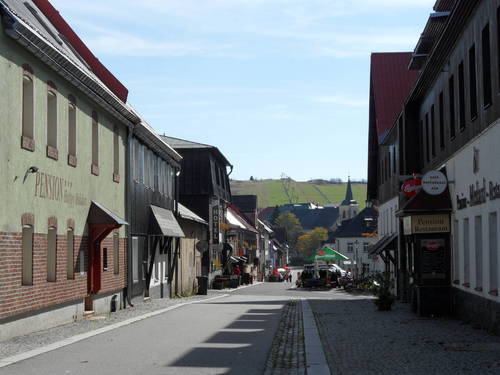 Published: 23.1.2023
History of mining, and many letters to Baby Jesus written by the hand of kids as well as grown-ups.