We started on Plane car park and we intended to reach Horska Kvilda. The weather was quite nice. We put on our skis and set off from Plane to Churanov. We followed a marked and well maintained trail. Soon we passed by the outer rim of Kobyla ski resort. There is the first snack bar at the upper part of the ski slope. We made a short detour to Churanov observation tower and then continued in the original direction. At V Polci direction board we turned to the west towards Churanovsky Hill. Soon we rode on the Sumavska ski freeway. 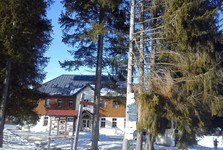 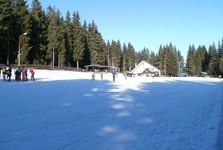 There were no races on that day. Therefore, we went to see the Zadov ski training grounds and tried some racing tracks. Going uphill and downhill was bit more difficult but eventually we found Zlata Prilba. There we joined the cross-country ski freeway again. There was possibility to make our route shorter on Ranklovska flatland by riding the freeway up to Horska Kvilda. However, we decided to continue to Tri Jedle. There is a turn to Ranklov Village and the birth place of Seppa Rankl (Josef Klostermann of Ranklov by his original name). It is said that Josef was 210 centimeters tall and probably he was ancestor of the writer Karel Klostermann. He was a model for a character in "In the Sumava Paradise" book by the writer. We rode on flatland from Tri Jedle towards Zhuri village. Then we went up to Horska Kvilda. Rankl hotel was where we ended our trip with some snack. 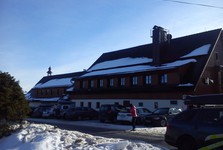 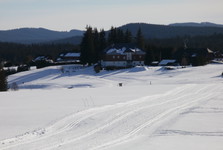 We set off from Filipova Hut on the following day. Our destination was Srni which we would reach by bypassing Modrava. The weather was great, therefore first we were headed to Ptaci tank. Skiing uphill was not difficul. There were flatlands and mild downhill. At Ptaci tank we joined Sumavska ski freeway and continued to Na Ztracenem direction board. Some went to the Breznik scenic point. 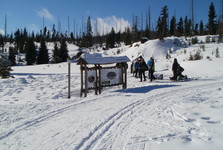 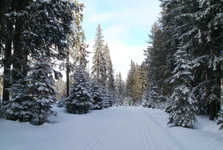 Na Ztracenem crossroads we were about to ride downhill along the Modravsky River down to Modrava. When arriving at Modrava, we noticed the Clog Museum and Modrava - Lyer a recently opened brewery which includes a great pub. Once we were done with our snack, we continued along Roklansy Stream and Rybarenska Slat to Javori Pula (there is also a pedestrian trail which goes parallel to the Sumava ski free way). At Javori Pily crossroads we turned to Trijezerni Slat. Upon short ride uphill, we rode downhill again from Pod Oblikem direction board (bit steep at start) until we reached Hakesicka Road. Then we rode on long flatland going downhill a bit along the Vchynicko-Tetovsky canal. At Pod Kostelnim Vrchem direction board we turned to the north. Soon we reached Srni. We went to a small local brewery/guest house U Zlateho Srnce to regain energy and have something good for snack. 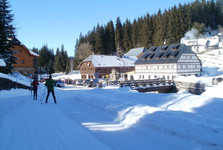 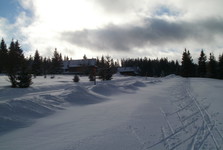 On the following day, our decision was to hit the route around Prasily and visit Lake Laka. First, we travelled upstream along the Prasil Stream towards the Franta Bridge. Going uphill was more difficult then. At Gsenget crossroads, there is a direction board with a table telling you the unique code to easy determine location when in terreain so any tourist rescue would be simpler. There we ate some of our supplies and moved on. There we passed by what is left of Horni Zdanidla village. Eventually, we reached the summit at Zlaty Stolecek. Ater that, we rode downhill. However, wot to miss our turn to the lake. Unfortunately, the weather worsened. We didn't miss our turn to the lake but we couldn't see it through thick fog. Most of us continued down to Hurka where they joined the Sumavska ski freeway and headed to Prasily. The skiers with greater desire for adventure in their heart rode along the red and yellow trails to the so called Russian Crossroad. There they rode down to Hurka on maintained skie trail. Then we made a stop in Prasily at U Michala pub and later we went to Pampeliska cake shop. 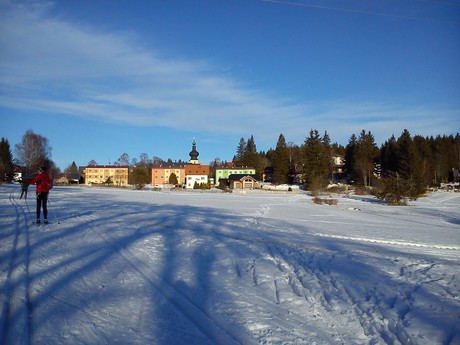 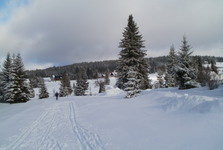 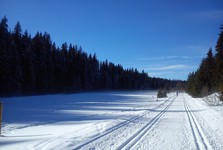 For worsened quality of snow on our last day there, we had to go to Modrava again. Our final goal was Kvilda. The more tired of us rather were headed to Fiolipova Hut taking shorter route. From there they would go to Brezova Mountain right to Kvilda. Or by going down Sumavska freeway but going uptstream along the Modravsky River - to Ptaci tank and then going long uphill to Cerna Mountain. 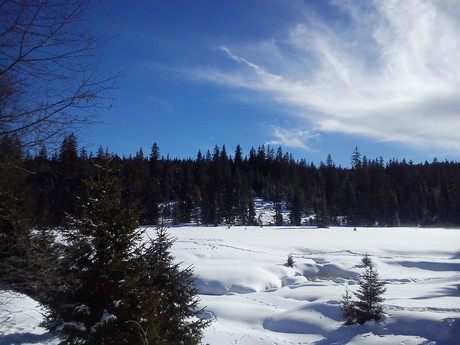 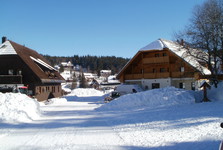 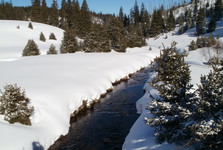 To conclude, I recommend you to visit Sumava in winter. The services are of the same quality as in the Jizerske Mountains or the Giant Mountains and add the beautiful nature of different feeling. Plus there are less tourists.