Fresh snow covering, mountain peaks under snow "feather-bed", majestic white colour-shade everywhere and crusted snow below your feet. Who does not know it? It is a scene as from Lada winter-stage, temptating the sportsmen to march out his board and use it inside such snowed up beauty. To get up the top, to take on the board and drive down the hill.

It has no sense to think over, the next article will describe...

Snowboarding is a sport branch which came into subconsciousness of people during break of 1960-1970 in America. It was united from two attractive outdoor sports - i.e. from skateboarding and surfing. The first attempts regarding surfing on snow was noted just in 1920, but a breach in such sporting section was made a couple of years later, when Sherman Poppen joined two pairs of ski with small rope, and so, the first snowboard model was created. Jake Burton, who let to be inspired by Sherman Poppen, (as mentioned above), found in 1977 Burton Snowboards Company (at present, it is first-class world-wide respected snowboard branch, including necessary supplements for operating of such sporting activity). Nevertheless, Jake Burton was not alone, as far as his effort is concerned, and Tom Sims established another branch (section) in the West part of the USA.

The development of snowboarding, which is always marching ahead, is not based on technologies only but the interest of public opinion would come into question. This sort of sport became very popular, despite the fact that, in the course of its beginning, it was taken for fashion eccentricity only. Thanks to such personalities, who are Jake Burton or Tom Sins, snowboarding became u nthinkable winter sporting branch fro thousands of persons all over the world.

In this connection, we cannot forget the names, which are not - for non-experts - generally known in the section, but in snowboard world they pay as undispensable icon. This is, for instance, Dimitry Milochow. He came with an idea to produce snowboards from polyestere, this idea let to be patented, and established, his own company, within couple of years later. Jeff Grep, another person, invented the first really fixed binders. 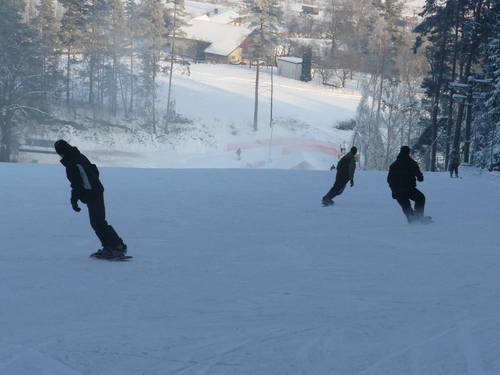 Snowboarding opponents hoped that this sport activity did not become popular and would be a hit for short time period only. Anyway, it was, thanks to God, useless. A lot of people cannot imagine winter saison without snowboarding at all, and some of them operate snowboarding all year round. Since 1998, this sport became a part of Winter Olympic Games. The Czech Republic could be boasted of their representatives, Martin Černík and Michal Novotný, during Olympic Games in Turin in 2006. The Czech Snowboarding Assotiation was established in 1990.

Snowboarding was divided, in the course of its development, into two categories of disciplines, where the drive on boards could be effected, such as:

- Freeride (a drive downstairs the hill, outside descent routes)

- Jibbing (a drive on railing)

If you wish to look for a place, where to follow snowboarding show (and the journey to Olymping Games would be to far and expensive), so, you can follow several races in the Czech Republic, where you can meet Czech snowboardists´ or world top class level.

It is, for instance:

- The Czech Republic Championship in Snowboarding 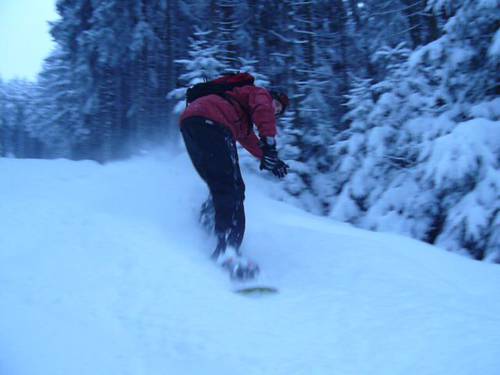 You do not need to operate snowboarding activity as relax or in professional way. The view at courageous tricks inside U-sloping drive or on slopestyle would delight you, for sure, in similar way, as a look at the drivers during freeride, going  through freshly fallen powdery snow, flying away from board edges as burning rocket. Provided you did not try, which experience could bring to you the descent in a route, hill or mountain, covered with snow, do not hesitate and submerge such magic of winter.