The name of the country is derived from German tribe of Sveas. The Swedish territory was colonized just in Stone Era. The inhabitants were obviously the collectors and hunters, nourished from gifts of the sea.

Sweden was established probably with connection of Svealand and Gotaland territories, during rule of King Erik VIII. Since 6th century, the town of Uppsala was economical as well as political centre of the area. Vikings´ offensives passed since 7th up to 9th century and were directed mainly to the East. During 12th century, the Christianity was effected there, and this fact contributed to the foundation

of united Sweden. Later, in 1389, the fight, regarding the throne, was finished, by means of so called Calmar Union, when Norway, Denmark and Sweden were united into one Monarchy, anyway, under Danish supremacy. Nevertheless, in 15th century, the Swedes resisted the effort to centralize the power under Danish Crown, and this fact finished in armed conflicts again. So, Sweden left the union in 1521, and Gustav Ericsson Vassa, who helped with his mutiny to the independence, established hereditary monarchy. He is taken for a founder of modern Swedish State and for Home Father. The Swedes successfully entered 30-years war. However, within its last three months´period, three Swedish troops plundered Prague, including King´s Castle.

In 17th century, Sweden placed in order between European powers. However, in the course of

following century, this position started to change quickly, when Russia fighted in North War with states of North Europe. This fact led to separation of east part of Sweden, and Russia

Principality of Finland was established. Anyway, as last war was an expedition against Norway in 1814. As a consequence, Swedish-Norway Union was established, led by Norway. However, this union crumbled in 1905. Modern history of Sweden is calm. In 1818, Charles XIV. Johann was on the throne, starting his peace policy, and his successors continue in such policy till now. Even at present, most of Sweden citizens support neutrality. The country was able to keep the neutrality even during both World Wars. Sweden is not a member of any military alliance. The government supplies big financial menas for the defence, military industry as well as obligatory military service. 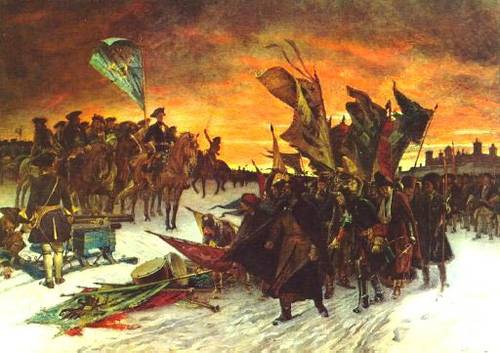