The most comfortable way to get there is to have somebody who gives you a lift from A (Horni Polubny - winter car park above the church) and picks you up at B (a car park at Bedrichov stadium). Otherwise you are welcomed to travel by public transportation or taking a cab. So, we put on our skies at Horni Polubny and get on cross-country ski track to Jizerka. As mediocre middle-aged skiers we decided to leave out the visit of Jizerka village. It was also partially due to ever changing weather. We planed to have a snack break at Smedava. Therefore, we turned at Vaclavikova Studantka. then we travelled west and followed the yellow trail which is also a bicycle trail no 3018 and then a maintained cross-country ski trail of Knizeci cesta. 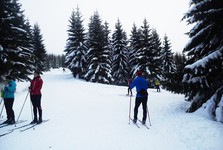 At Sedlo pod Zamky directions board it was getting sunny. Therefore, we hesitated for a while if follow the blue trail and visit Jizerka. However, thinking about a snack break at Smedava and our worries of the long way ahead was stronger. Therefore, we went on to Smedava. The trail is very nice and follows a contour line. It goes slightly downhill near Smedava. Altogether, it is about 11 kilometers long (from Horni Polubi car park to Smedava). Smedava cabin was good as ever. The self-service restauran has a wide variety of food and beverages in its menu. Staff is friendly and toilets are clean. What more would you want? So, upon great lunch and small shot of slivovice we set off to Knajpa. 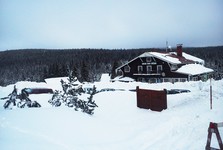 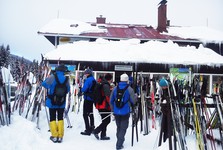 There were two trails to choose from - either a steep yet short one which goes across the Klecove meadows or an easy one yet longer one which follows the so called Kasarenska road. The former was our choice. We didn´t regret it. It is less frequented. Once we crossed about 2 kilometers of the steepest section, there was a vista of the summit of Jizera mountain, the Smedavske mountains and Klecove meadows covered in snow. Even sun bursted through the clouds for a while which opened an amazing winter landscape in front of us. But the sun was veiled by the clouds again. Then we set off to Knajpa. The buffee was open. However, being it on an important crossroad, there were many tourists at the time. 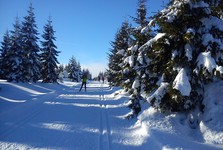 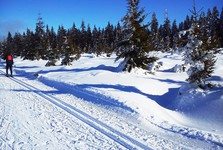 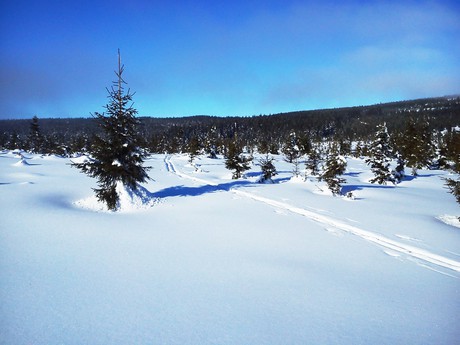 So we went on to Cihadla. Half a kilometer down the trail there was another direction board, a small observation tower and another decision in fron of us - either take the shortest route to Kristianov and then cross Nova Louka and to reach Bedrichov. Another option was to make our trek longer. The weather was quite good. We learned from the map what terrain lays ahead - it would be basically flatland. Our decision was to go on along Stolpisska road. We skipped a visit of an observation tower for it was not the best season of the year to get there and we had not suitable shoes for climbing it up. So we continued by Tetrevi cabin, Krasna Mari, Ptaci Kupy until we reached Tocna. There we could either turn to Nova Road in the direction to Kristianov. However, we moved towards a buffe on Hrebinek situated about 7 kilometers from Knajpa. This was, however, not only ours idea. We encountered quite a line at an outdoor kiosk. Eventually, we used our own food for a snack break. Then we tookthe shortest route (along the Hejnicka road) to Nova Louka. 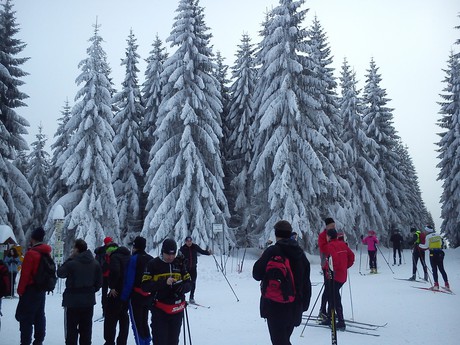 Maybe somebody would like to make their trip longer. Then, for instance, just go from Hrebinek Bila Kuchyne. When skiing to Bedrichov, pass by Olivetska from the west. We thought about having a snack at Samalka cabin in Nova Louka. However, the temperature was decreasing which prompted us to go move on and have a snack at the very end of our journey. We were not disappointed. We discovered Dolina. It is a nicecabin below the cable car at Bedrichov's public pool. The staff there is friendly. As we were at the end of our trek we were in no need to hurry. Thus, we enjoyed our time there. 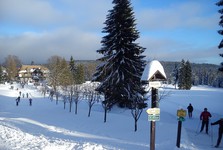 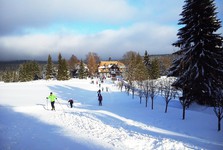 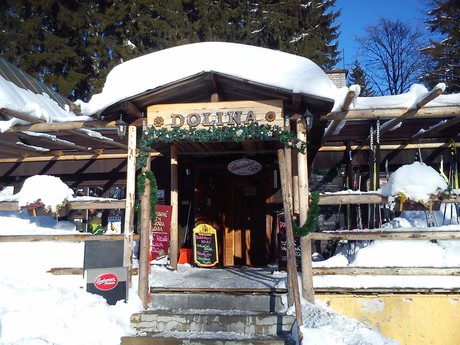 Everybody were happy. Why not. All routes were well-marked and were adjusted for classic or skating styles. Weather was good as well. Apart from going uphill from Smedava to Knajpa, we more or less followed the countour line. Most of the trail went, however, slightly uphill. You can see it at any tourist map. If not this year than the year after this one we will gladly cross the Jizerske Mountains again either down the same trail or from Horni Polubne to Bedrichov.

Published: 28.1.2022
The unmistakable and easy-to-spot dominant of the North Bohemian landscape is one of the most visited places in the region. And this holds true in every season. The summit is easily accessible by cable car, a network of hiking trails and abundant curves of the asphalt road. Upstairs you will be amazed at the view of the entire northern half of Bohemia, as well as the unique multifunctional rotary hyperboloid building. It's Jested.