en.infoglobe.cz » Germany: Herrenchiemsee – Chateau of a King Who Wished to Sell Bavaria

An Island in the Bavarian Sea

Lake Chiemsee, dubbed the Bavarian Sea, lies 85 km southeast of Munich and its area is eroded by four islands. The largest of them, Herreninsel, has an area of 238 hectares and can be reached by boat from any lake-side settlement. 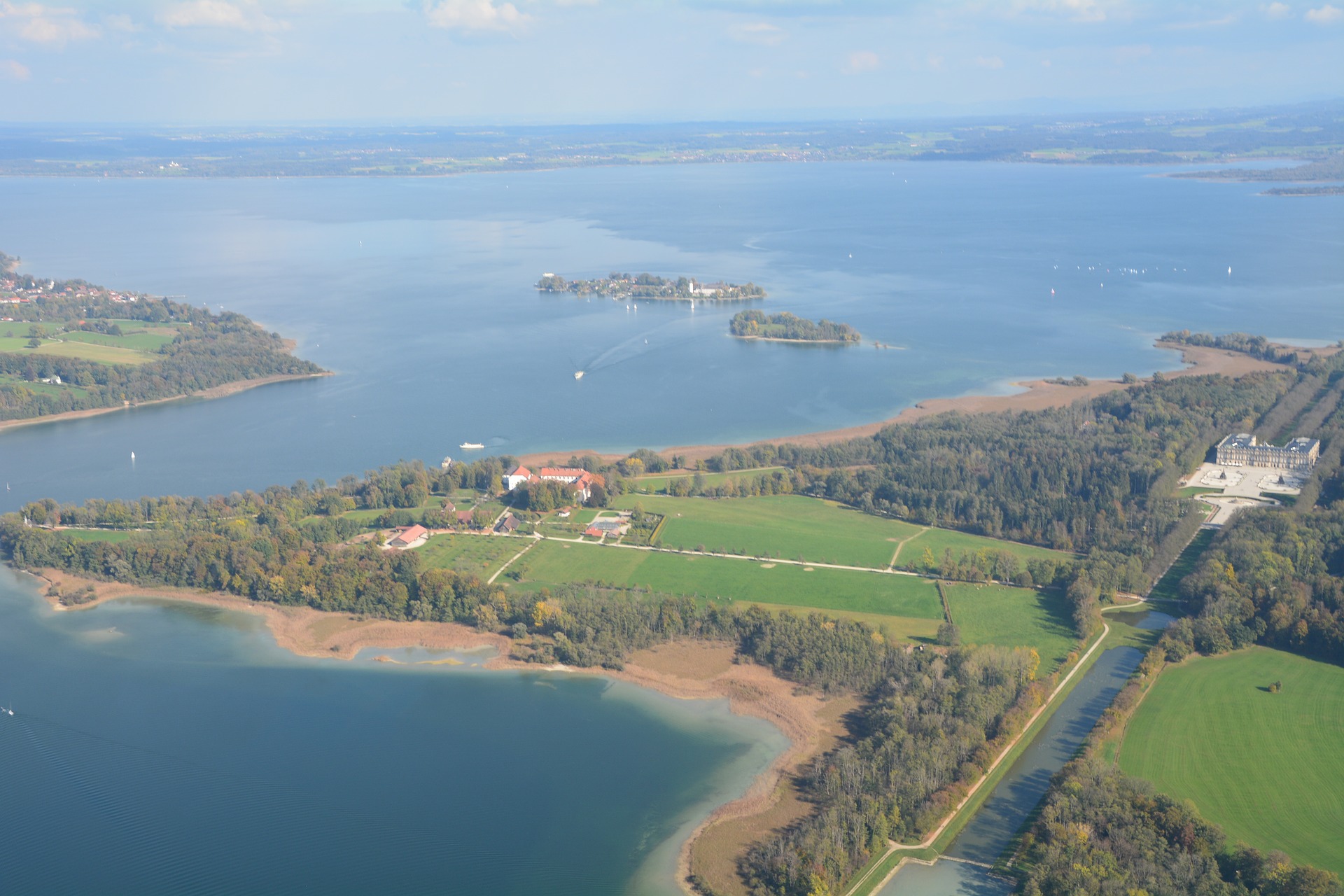 We know from archaeological research that the island has been inhabited for centuries. From the Middle Ages, there was a monastery in the northern part of the island, which was later abolished and buildings in the 19th century rebuilt and used economically. Today they are called the Old Chateau and a museum and a picture gallery are open here.

In 1874, the Bavarian King Louis II purchased the island to implement his megalomaniac plan to build a copy of Versailles Chateau. Until his death, he managed to build the main wing of the castle, partially equip it and in the garden to create water features, fountains and a canal in the main axis. Although the work remained unfinished and some of the rough structures were even completely removed at the beginning of the 20th century, the impression of the castle and garden is spectacular. The decor of the finished interiors is stunning and the Mirror Hall is even larger than the Versailles, measuring 75 meters. The bath in the marble bathroom holds 7,000 liters of floor-heated water. 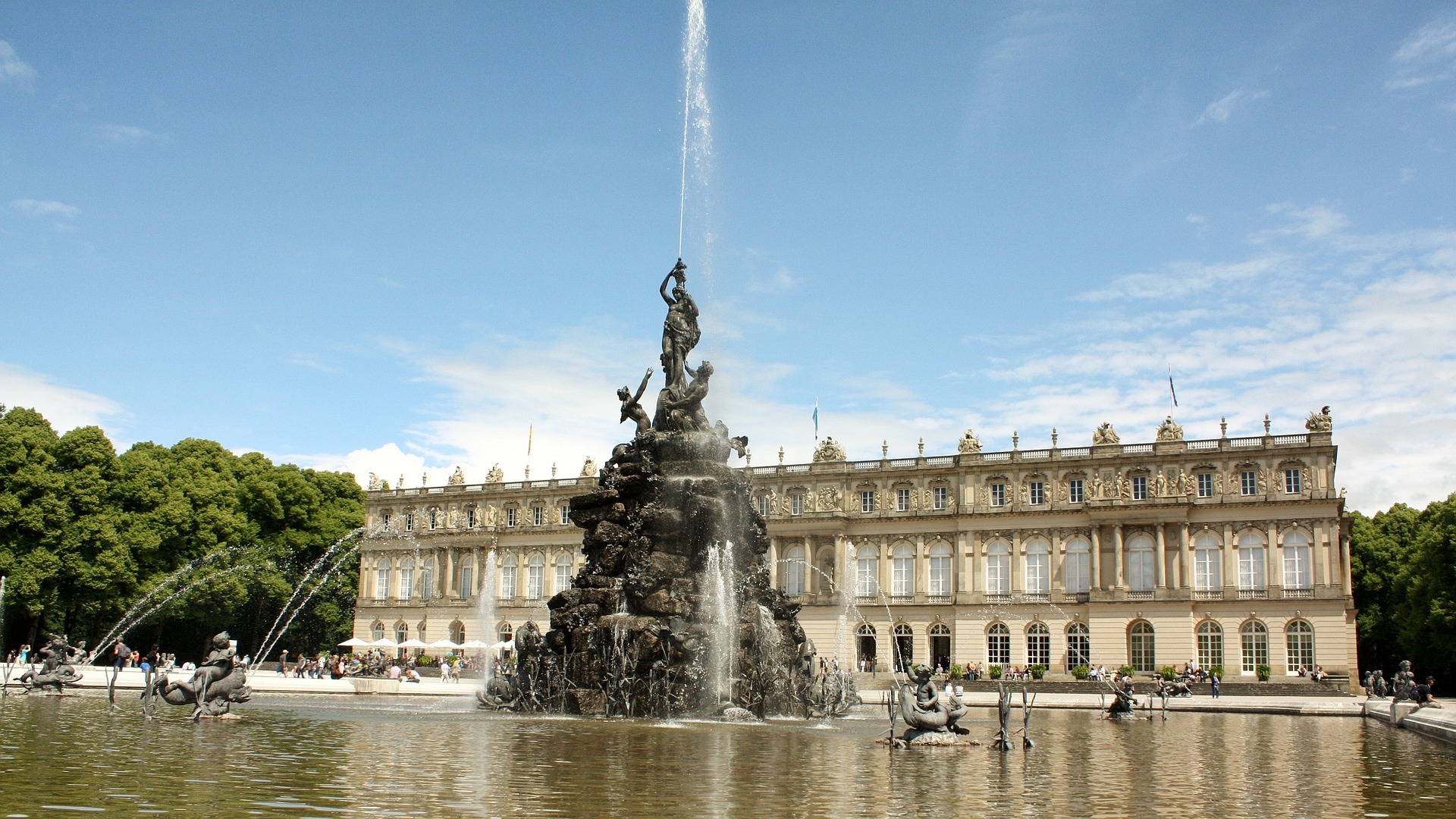 The garden was built in a natural, originally undulating and rocky terrain by aligning 80 hectares to a level, so that the king could see the same as his idealized Louis XIV pattern from the windows of the living rooms and the Mirror Hall. Two water reservoirs, a fountain, an Apollo fountain, and a canal dug out of the lake. On the eastern side of the castle there is a 900 m long driveway. Other vistas were fitted with tall hedges so that the king did not have views of the surrounding countryside and farmland. 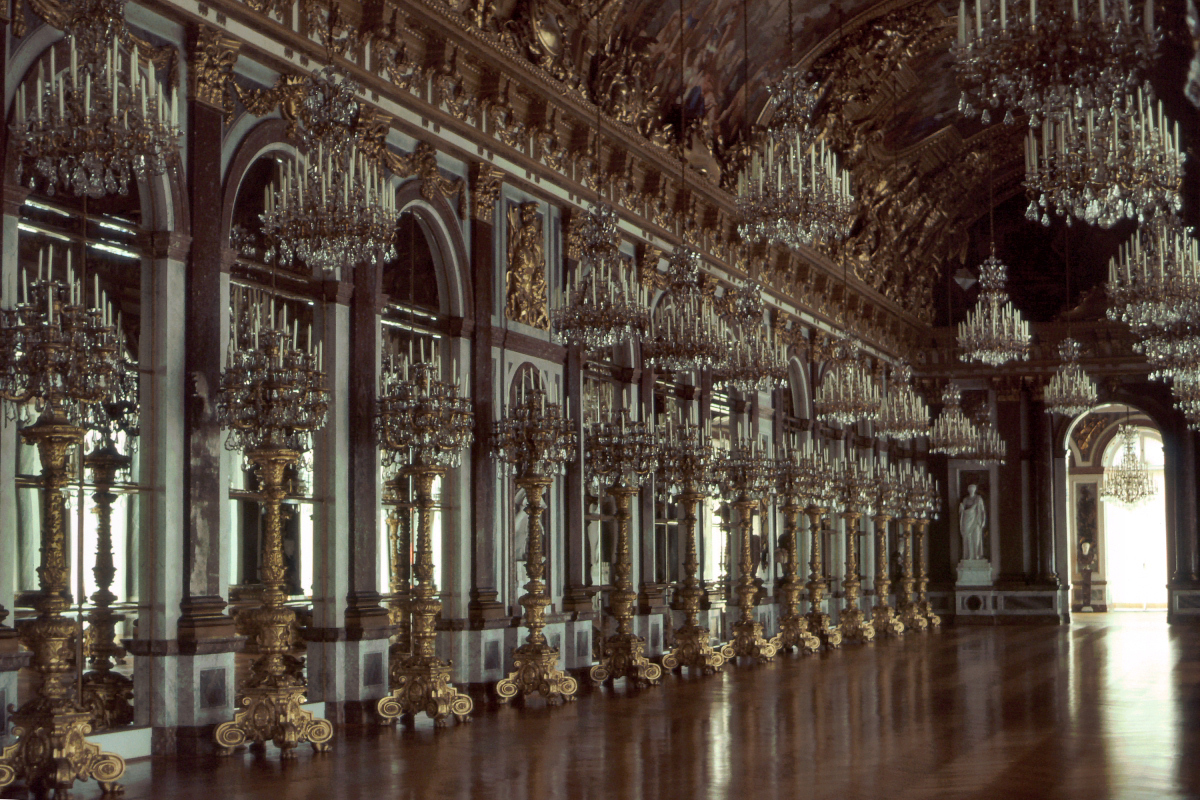 At present, the chateau is open all year round and besides the building itself and its equipment, you can observe the current rare inhabitants of the attic - bats. Through the installed cameras, visitors are allowed to watch the life in the bat colony on the reception screens. According to historians, the castle builder is similar in many ways. Ludvík II. he also said he preferred nightlife.

Bavarian King Louis II was especially famous for his relationship to art and architecture. It was he who built the Linderhof castles and the famous Neuschwanstein, the dream of all Disney princesses. He spent his childhood at Hohenschwangau Castle, which is in sight from Neuschwanstein. 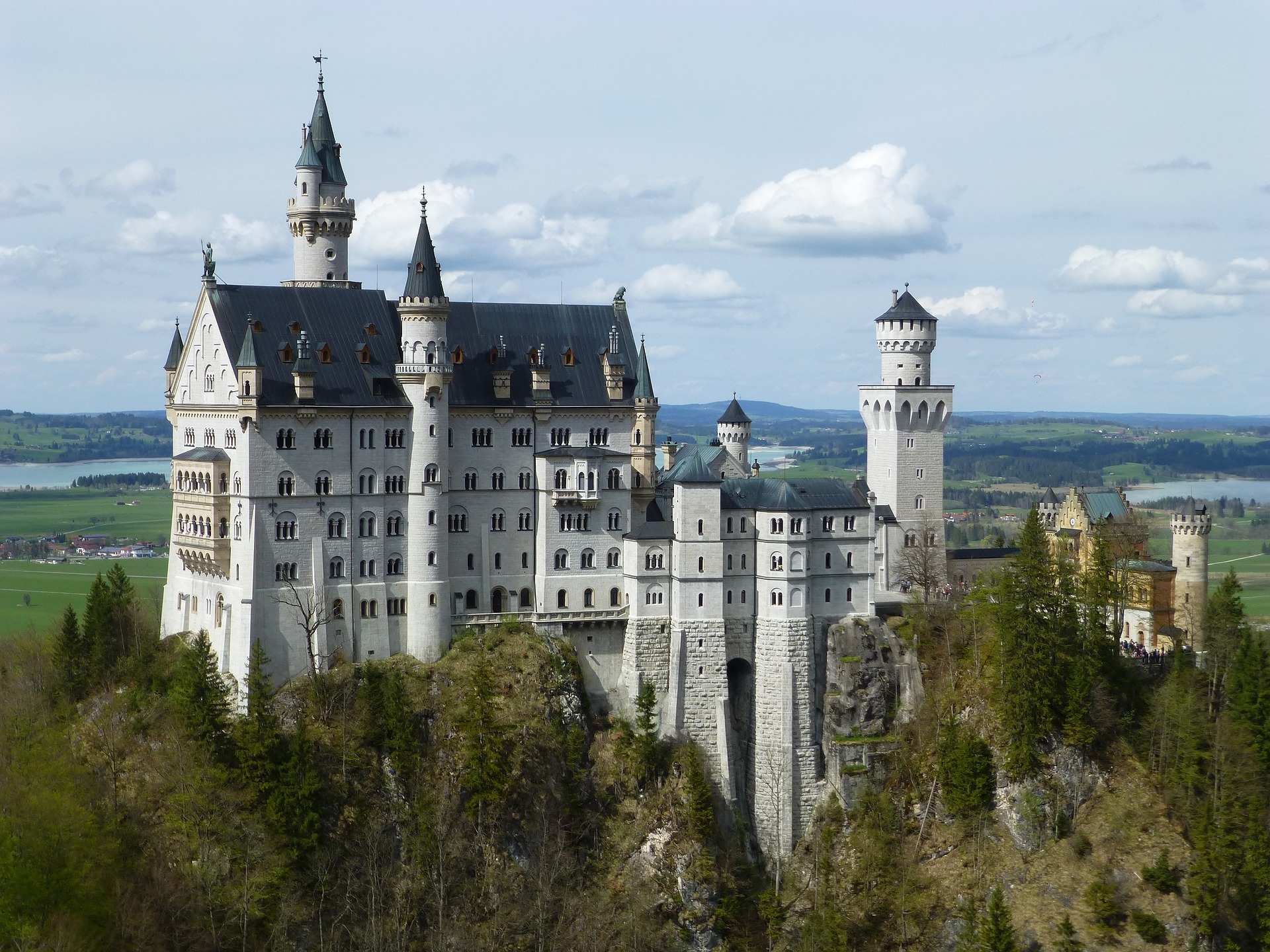 He was a cousin of Elizabeth of Bavaria, known as Sisi, whose younger sister asked for his hand three times. But he always canceled the engagement, as his affairs with the butlers, musicians and actors came out.

He had an intimate relationship with Richard Wagner, whom he had generously supported. He loved music and especially opera, and he had a production for himself, as the only spectator. He was interested in myths and myths, spent hundreds of thousands on paintings and sculptures, and never worried about the budget. It caused problems not only to himself but also to all of Bavaria, which eventually became fatal to him.

His ministers had long described the geeky behavior of the king as a symptom of mental illness, but the cup of patience overflowed when the King commissioned the Treasury Minister to sell Bavaria and demanded the purchase of a new country in South America. The ministers were waiting for nothing else, letting the king deprive him of his authority and thus the throne. 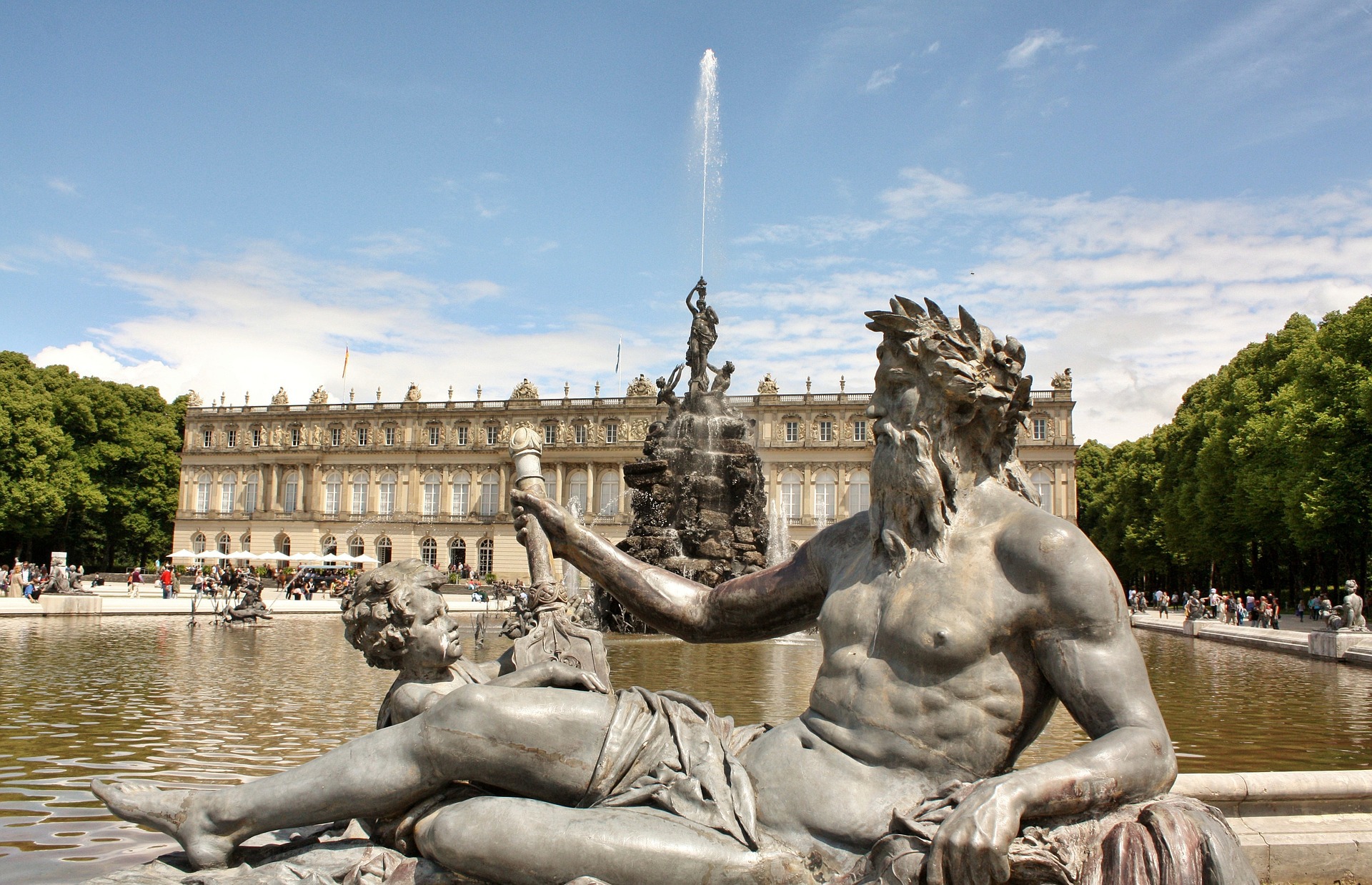 The whole act was not smooth and ended tragically. The king was found dead after a walk on the shore of Starnberg Lake. She was accompanied by a doctor, dr. Gudden, who was also the author of the psychiatric assessment of the king's mental health and who was also killed. So far, it has not been clarified what happened at the lake and under what circumstances Louis II came. for life. The theory is more: double suicide, murder, or failed escape attempt. Did he kill the King of the Doctor and then he got a heart attack while trying to swim over the ice lake?

What to say in conclusion? Perhaps only one thing goes away. Lake Chiemsee is slowly disappearing. At the end of the Ice Age, 10 000 years ago, it had an area of about 240 km2, today it is barely 80 km2 and only in the last hundred years has its area reduced by more than 200 ha. So do not delay the journey to Herrenchiemsee, who knows what will happen tomorrow?