Although the castle is situated not far distant from Bratislava, better to say, to Devinska Nova

Ves-quarter, the shortest way from Bratislava leads there through more than 20 kilometres roundabout way, via Berg crossborder point, passing the community of Wolfstahl, and after small town of Hainburg, but in front of another locality of Bad Deutsch-Altenburg, you have to turn to the right, passing over Danube-bridge. You continue straight ahead, in direction to Marchegg, up to Niederweiden Castle (at right part of the road). This castle is open for public – sightsseing or various cultural events - since May till September. Passing this Castle, you turn again to the right, and, after three kilometres of drive, the orientative plates show you a way to parking, hidden among trees. The parking could be full, especially during weekends. According to car registration plates, you can identify the visitors not only from Vienna or Bratislava, but also from more remote localities. The castle interiors are being used for various events, concerts and theatre performances, weddings or other celebrations, conferences or companies' meetings, up to specialized programmes, such as school excursions.

The castle itself is not big. The sightseeing of its interiors is possible with a guide or also individually, as the panels in each room give you the information in German as well as in English languages. Provided you wish more detailed explanation, you can use so called audio-guide (leased apparatus, containing the explanation in chosen language in receiver). Except festive hall and neighbouring chapel, no room was preserved with its original inventory. Only a part of original furniture is installed there including samples, presenting restoration works, building planes and the other documents. It is connected with previous destiny of the castle, which was not only luxurious aristocratic resort.

The history of the castle is joined with a name of Eugen di Savoia, an important Austrian commander. A native from France, he originally was directed, on base of family decision, to priest´s profession, nevertheless, his heart was driven him to military career. When he was refused by local troops, he was engaged in military services abroad, concretely in Habsburg troops, fighting against Turkish troops. Within short time period, this „Small Abbe“ (he received such nickname, owing to his small figure) obtained his military fame, and he remained for all his life in services of Austrian monarchy, obtaining there the highest military honours. These activities  brought him the corresponding position at Habsburg Court. As the expression of his merits, his majestic riding-horse statue is placed in front of Hofburg or Belveder Chateau, which he let to built in Vienna.

Eugen di Savoia let to construct also Schloss Hof in Baroque style, not far from tributary of Morava and Danube-rivers, as his holiday and hunting resort. Later, Empress Mary Therese became an owner of this castle. She let to extend her summer seat and reconstruct into its actual face. However, Emperor´s Parentage lost their interest in looking after the castle. So, later, during Franz Joseph II. rule, the castle was handed over the army. This institution established there its training centre, including horse-riding school. The castle was in hands of the army till 1950. Before, it was a place (till 1955), where Red Army troops were accommodated. Nevertheless, when the army left the resort, the efforts to save this dilapidated castle into former glimmer of aristocratic seat, appeared. However, it took another twenty years when so sufficient financial means were gathered, in order finalize its reconstruction.

So, the castle was open for public just in 2005. Since that time period, the builiding temptates not only all lovers of history. Its terrace gardens and parks, full of flowers, are very pleasant relax places. A park of English style, situated in lower part of castle complex, and even a part of a farm, were changed into small ZOO-Garden, looked for especially with families and children. For us, it is available and interesting an extraordinary view towards Devinska Kobyla massif with house-quarters and factory chimneys of Devinska Nova Ves, or to remote silhouette of Devin Castle. 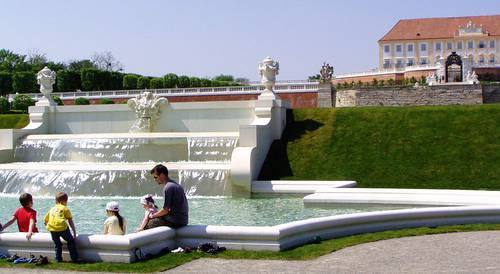 Published: 19.11.2017
In the season before Christmas, Lower Austria transfers to a land of Christmas markets. They are everywhere. You may find them at chateaus, in towns, at old ruins, in wine streets, on squares or in the mountains. We bring you a list of the best ones.