However, the person who does not know the history, he is unable to understand present time, and he is „condemned“ to experience the past once more.Anyway, visiting Berlin, you can realize quickly, how true this affirmation could be. To tell the truth, Berlin is not a place for relax, this town will forcel you for thinking. 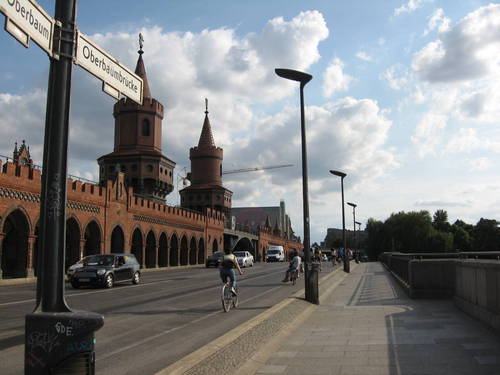 This is a symbol of German re-union but also a place where Hitler´s assembling for power was effected. The gate was placed in this Berlin boulevard in 1791.Originally, it was named as Peace Gate. In its neighbourhood, very important moments of German and world´s historical events were performed. From West part of Berlin, you come there through wide and long avenue. It is the same street, where Nazi leader Adolf Hitler arrived innumerably. So, a couple of streets nearby from former seat of Gestapo (Secret Police) and Brandenburg Gate, big bunker was built, where Hitler, shortly after capitalation of Germany, made suicide. Now, in Kolmar Street, you can find a panel, informing about technical data of Hitler´s bunker only. 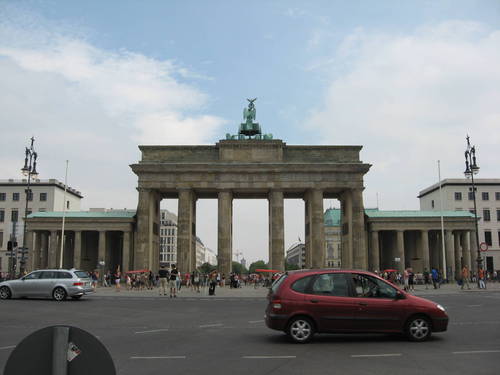 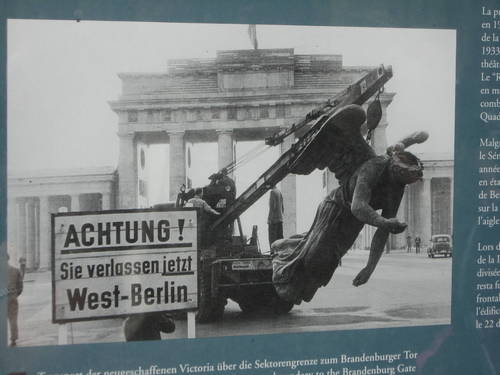 The pavement, where thousands of tourists are walking daily, strong roofing-felt, just directly on places, where the line of former Berlin Wall was passing, was lined. Almost four metres high and 165 kilometres long „gesture“ of „Soviet Control“ was put in front of Brandenburg Gate, for long time period of 28 years. Except East Berlin, this wall divided also Brandenburg Region from its west part. This wall would prevent from escaping the persons to the West. Within 1949-1961, former German Democratic Republic (GDR) frontiers were crossed nearly by three millions of persons, mostly intelligentsia (intellectuals).So, since 1961, on base of Moscow decision, initiated by „Comrade“ Nikita Sergeyewitsch Khrustschew, a wall between Soviet and West sectors of Berlin was constructed.. The frontiers in town were closed, first of all, by means of barbed wire, later by wall of four metres height. Finally, the greatest celebrations of fall of Berliner Wall were effected on 9th November 1989, just in front of Brandenburger Gate.

Berliner Wall: Symbol of so Called Cold War and Tourists´ Attraction at Present

So, the rests remained only from Berliner Wall now. Two pieces could be found between Potsdamer Square and Check-Point Charlie, another one along Bernau Street. Nevertheless, the longest fragment of Berliner Wall - so called „East Side Gallery“ is 1300 metres long, placed along Spree-river. The caricatures of former politicians make these hard consequences of Cold War rather easier. The fact, why this was a fright (terror) for the people and why they had to die, became an attraction for tourists. The data about shot-dead persons,who tried to overcome the wall or some from four check-points (border crossings), differ even at present. The last published numbers give us an evidence about 130 dead persons. Never mind, many of another cases are still under inspection. 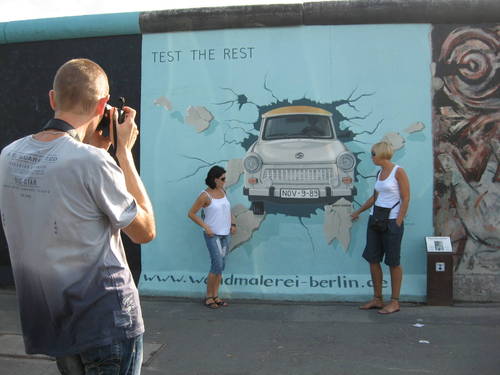 Nearly 21 years after fall of Communism and German re-union, you can immediately distinguish apparent difference between West and East part of the town. Grey dwelling houses are to be found everywhere. Bad taste as well as the uniformity of Communism did not disappear from streets of East Berlin till now. „I was here ten years ago, and this street was completely vacant!“ young man from Canada describes a change of East Berlin, showing in direction towards high modern skyscrapers. „I was unable to recognize a lot of places. On the other hand, in longer distance from city centre, the places remained unchanged!“ he adds.

At the wall, decorated with billbords and photos from Cold War time period, a German young man is describing in emotive way a history of his mother.She was regime opponent and experienced similar life as millions of East Germans. „She wished to escape, but finally, she thought it over. She could not risk at all, she was not foolish!“ young guide says, and the people around are listening to him with great interest, and follow all interesting facts and photos on the wall. A young French girl is wondering, watching at a photo of 1961, where the American and Soviet tanks are in close position against each other. 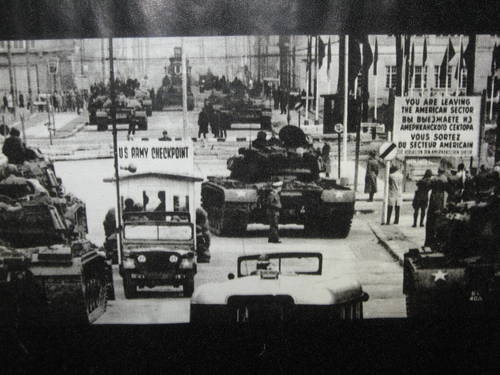 Everybody knows a story of Berliner Wall. If you visit these places and walk along high wall and read the stories of the persons, who tried to reach the West in luggage space of the vehicle, so it could be even their story. And Berlin knows this situation perfectly. If you are completely open, you will become its part, fall in love with, and will be ready to return there again.

It seems to be unbelieavable but Berlin streets are not full of vehicles. The streets and avenues are very spacious and so, they are preferred by cyclists. Each Berlin citizen has his own bicycle. The managers in ties and the ladies in costumes are travelling to their offices in such way. So, the bicycle is the best mean of transport for tourists, too. Your cycle could be hired for a fee of EUR 10,- per one day. According to Lonely Planet Guide, 400 000 cyclists travel throughout the town daily. They have at least 130 kilometres of sufficient and safe cycloroutes available. 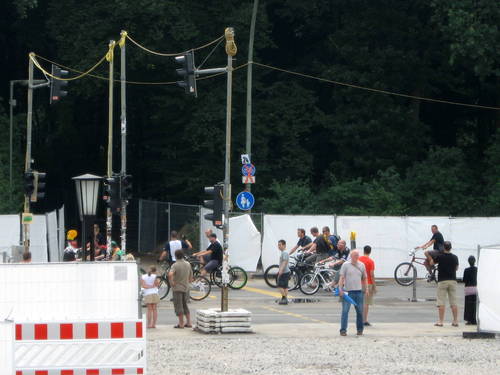 Published: 3.1.2011
Bayreuther Festspiele, Markgrafliches Opernhaus and other places of interest of such locality as well as another activities, all these are offered to visitors and local inhabitants by this German town. The locality is situated in North Bavaria, on Roter Main river, easily accessible by car or by train, but also a connection by plain from near Nurenberg is also available.