en.infoglobe.cz » CR: The Cave Na Pomezí - A Cave With A Heart

CR: The Cave Na Pomezí - A Cave With A Heart

Published: 21.10.2010
The caves Na Pomezí, situated not far from the town of Jeseník, were discovered in 1949. After long years' investigations, total length of caves was stipulated to 1320 metres. This two-storeys cave system is characteristic with its sintre decoration, including big stalactites. As a speciality, it is a stalactite in a form of a heart, which could fullfill, at the touch, any your wish.

Cave Na Pomezí is the greatest cave in cristalic limestones in the territory of the Czech Republic. It is placed in the surroundings of the town of Jeseník, 400 metres distant, at the col Na Pomezí, in an altitude of 450 metres above sea level.

This cave is typical for its power cascades of sintre waves and big stalactites of heart formation, which appear in onion or radish forms. 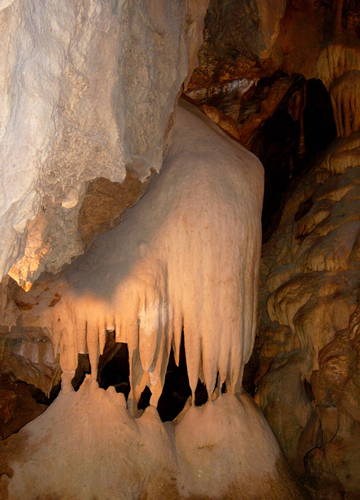 Upper floor has, however, dilapitated character, and fallen ruins are mostly hardened with sintres. This floor is not compact, and was modelled with demolition of broken limestone stratta. In this floor, there are to be found: Ice Dome, May Cave, King´s Dome and a Dome close to Pulpit. 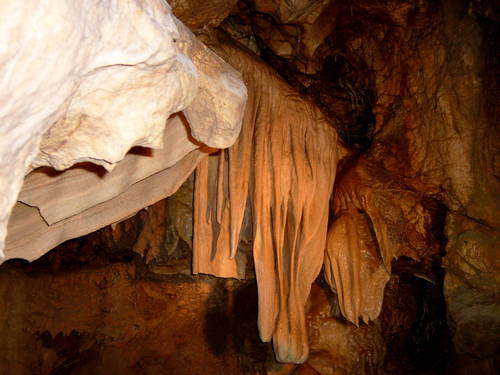 Lower floor is a labyrinth, full of narrow crumbled and rusty corridors. Most of accessible system is to be found here. This floor is placed nearly in water-level of Vidnávka-river.

Nevertheless, no standard flow is flowing through, but before the pumps were installede there, this area was frequently inundated, at the thaw or during period of heavy rains.

The whole river-bed is passing throughout ceiling floor, most visible in the corridor of so called Roman Baths. Such cracked corridors inside lower floor are narrow, steeply bowed or perpendicular and rather high. The crumbled corridors are, on the contrary, changed by means of subterranean flow.

This beautiful and rich stalactite decoration was preserved in its original state, especially in such part of  cave system which is not accessible for public, in crumbled corridors, after „Kangaroo Pockets“, in Labyrinth and in Marsh Dome.

- stalagmites of candle form, with sintre borders and edges, established in the water level

and below level of sintre lakes 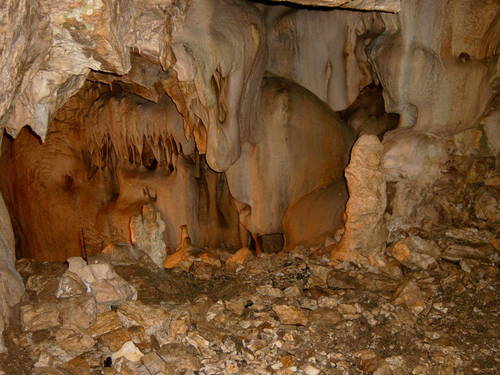 - cave spaces were discovered in August 1949

- some skeleton rests, craniums as well as long bones of bats and forest martens were found in the cave

- inside former Havranek Quarry, karst hollows were uncovered, at the beginning of 20th century

- air temperature in the cave is moving at 8 °C

- the cave serves as an important wonter stay place for bats

Published: 5.9.2007
You find these caves in Central Moravia near to the community of Slavětín, approx. 10 kms in western direction of Litovel.

Published: 25.11.2010
Zbrašov Aragonite Caves are placed inside left slope of Bečva-river Valley, in Teplice nad Bečvou Spa, in an altitude of 250 metres above sea level. These caves of hydro-thermal origin are the only one in Czech Republic.

Published: 11.11.2010
Javoříčko Caves consist of three-store system of tunnel corridors and big domes with precipices and chimneys, created by mens of erosive-rusty processes. The caves are situated in Olomouc Region, not far from the Town of Litovel.

Published: 4.11.2010
Chýnov Cave, known as "Painted Cave" is placed in Pacova hora, not far from the community of Chýnov, in an altitude of 539 metres above sea level.

Published: 15.7.2008
One of most known cave-complexes of Czech Republic is situated couple of kilometers only from the town of Beroun and 40 kms distant of capital Prague. The cave-system inside hill of Zlatý kůň (Golden Horse) near to the community of Koněprusy is most extended and longest underground system in Bohemia.

Published: 10.10.2007
Jeseník is a Silesian town in northern direction of Olomouc Region, situated on confluence of small rivers of Staříč and Bělá. In the past, the originally inhabitants were mostly German, from this reason Jeseník was known till 1947 as Frývaldov. The town is placed in Preserved Protected Area of Jesníky.

Published: 2.12.2010
Punkva Caves got its name according to standing subterranean spaces of Punkva-river, between Macocha Abyss and Pustý (Punkva Žleb). The system of underground halls is placed in two levels (stages), situated in north direction from Brno, Moravian Karst, in an altitude of 355 metres above sea level.