Nevertheless, several outlooks exist around where the curious human eyes could look at its secrets as well as at moderate signs of hard work, which working persons were forced to undertake.

Anyway, let´s start with small portion of history. The mining of limestone was mentioned just from time period of four thousands of years ago. But, as stressed above, the activity in this locality was started much more later. You can imagine that this work was no pleasant employment at all and the persons, who worked in these quarries, had to have not only their strong hands and muscles but they could not be afraid of anything. Anyway, within 1944-1963, the excavations finish slowly and consequently, and the quarries started to be overgrown with grass and trees. On the other way, its „transparent eye“ in its bottom temptates - despite prohibition - each summer many lovers of bathing. The people climb over the barriers and descend down by means of ropes.

How exactly „the America“ appeared in Bohemia?

No wonder. Water level is staring at you as greedy great fish eye towards the sky and knocks off probably all distress of all persons, which nourished the work in a quarry. Nevertheless, not only the romanticists and hikers are allured from its embraces. Shortly afterthat when the quarries were closed, the specialists, such as botanists, paleontologists, geologists or even speleologists came there. All persons wished to see, in his own eyes, this nature wonder and check, what concretely it is offering. And all tried to give the name this phenomenon. So, now, we can meet many names of such locality - such as: America, Příroďák, Katzatelna (Pulpit), etc. Nevertheless, it is always the same place.

The America quarries seem to be most beautiful in autumn. During moderately chilly weather, steep slopes of local rocks, covered with small trees, (distorted similarly as human character) will be changed into many-coloured cloth, swinging with its leaves in the wind as women-models on fashion parade. Moreover, this enthusiastic admirer does not find nearly anybody. Maybe, some person with a dog could pass by. And so, you can fully enjoy a view at empty quarry, which is overcrowded during summer period. Nobody will disturb you. In the sky, above your head, you can follow only hum of wings and muttering of motor rogallo, and it seems that you could perceive, from such height, a small reflection of your own face in glittering water level.

The America calls, with its name and its condescending calm, a desire to continue ahead and see more. Maybe, it could happen, thanks to its absolute balance. All is so settled, as it would be: smooth rocks let to suspect, what happened here certain time ago. The grass offers small way of relax only, before gravels creak under your shoes, and your thumb will shake under attack of cold drop of water. But, no waves are to be found there - water is a mirror of human history only. And their colour shades - from turquoise via dark green up to black-black colour, give to forsee, that inside your head as well as your spirit could be lost.

Our Czech America in Karlštejn area presents no dream or a paradise in the Earth. It is a witness of past, which could chain you with their belts so quickly and without any discussion, in which the American Indians bound their white intruder, who penetrated their territory. And no of mentioned captives had a chance to be set free from such constriction. 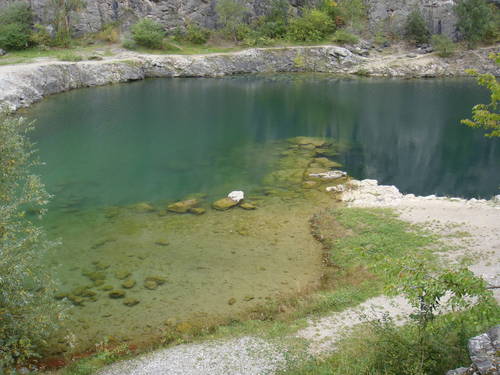 Published: 5.5.2010
The America is a name for ditch limestone system of quarries in Bohemian Karst, joined with subterranean galleries. So called "Velká Amerika" (Great America). "Malá Amerika" (Small America) and Mexico belong to those most known ones. Several other, smaller and bigger quarries, are to be found inside surrounding forests.