en.infoglobe.cz » CZ: An Autumn Trip to Granite Stones Near Zihle – To The Statue of St Peregrin

We leave Baba boulder (along the yellow trail) for Viklany. The trail follows contour line to Ovci valley. A small rivuret which starts at beginning of the valley and flows across this valley. It is difficult to recognize where the rivuret actually begins because it is somewhere in the middle of forest marsh. A meadow is sitauted near this road with witch's broom, an interesting nature phenomenna. It looks like a growing nest of tree branches. A witch's broom is a deformity in a woody plant with a dense mass of shoots of different colors, shapes, and leave formation. 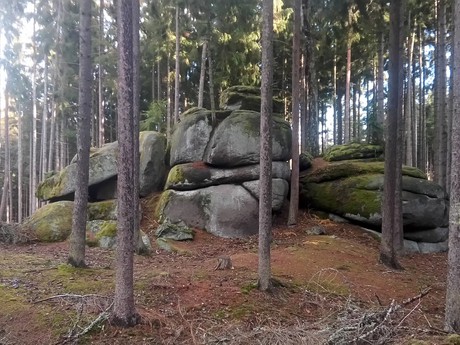 A memorial milestone with the date 1789 used to be near from here. However, one day I noticed it is no longer there. We often aimed to reach it on our trips. Often, we found there a balloon with a postcard which mostly flew in from Austria or Germany. It seems very strange to me, how air currents could bring balloons all the way here. I am very curious how many of you find a balloon on your trip! 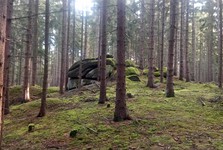 It is only 300 meters from the end of Ovci valley to Viklany. However, we pass on these today. Rather we follow tourist signs which get us to places an ordinary tourist wouldn't normally see. By turning slightly off the yellow trail, we found amazing sceneries. Once you see many of local rock formations you feel urged to tuch them and see them from up close. Legends of a bandit who lived in the area come right into your mind. Around are many small caves often used by hikers as shelters. Also, there are many nooks where foxes, badgers or beech martens hide. Also, there is a rock where horned owl nests. This entire locality's name is Nad Myslivnou. 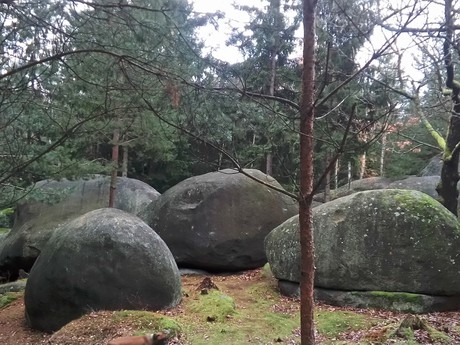 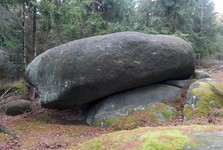 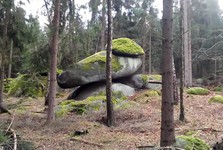 This and many other places were likely favourite to Count Maxmilian Vaclav Lazansky. In the first half of the 18th century, he bought the entire dominion and built there a hunting chateau. Then he visited it often with his wife. He built trails for her so she could take rides into the surroundings. At the end of WWII the chateau burned down

, unfortunately. The trails are now hard to find. Large oaks which once lined the trails can provide clues where these trails once were.

The count injured his leg one day. Grateful for being cured, he built the statue of St Peregrin, the saint of the Servite Order. On the front side you can read the text in Latin which also features the year of 1761. The statue was placed on the road No 206 between Zihle and Rabstejn nad Strelou near the turn to Sklarna. There is a Servit cloister and the churhc of Our Lady of Sorrows. The count was the patron of the cloister.