The Červené blato National Nature Reserve is located between Suchdol nad Lužnicí and Trhové Sviny in the southern tip of the Třeboň Basin. From the end of the 18th century until the beginning of the 1920s, peat was mined here for the nearby glassworks in Jiříkov údolí. In 1953, a nature reserve was declared here. The area was named Červené blato after the brown-red water that flows out of the peat bog. It even colors the nearby Nový Lipnický pond. 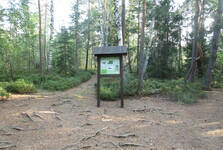 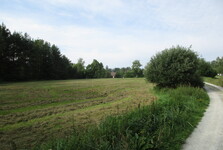 The peat layer is sometimes up to eight meters thick and the peat bog area is covered with a unique peat forest. Scots pine, Scots pine and also various types of birch trees grow here, as well as blueberries and cranberries, marsh pine and sagebrush. You will also find a carnivorous round-leaved sundew, a marsh cranberry or a marsh sundew, which forms carpets of white flowers in spring. Different species of bryophytes are also represented. The mentioned Scots pine is a Central European endemic, which means that it does not occur naturally elsewhere. In addition to the Třeboň Basin, you can find it on some Šumava peat bogs or in the Jeseníky Mountains. In addition, the peat bog is home to many birds, such as the black stork, the little bustard or the watercress, butterflies and moths. 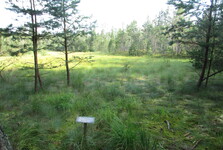 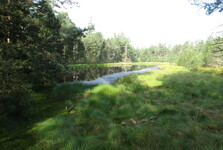 The area is accessible only along the route of the nature trail, which leads both along forest paths and along attic wooden paths. The trail measures about four kilometers, has 9 panels and begins and ends in the nearby settlement of Jiříkovo údolí. The route copies the old trails that were previously used here for peat extraction. About halfway there is a wooden terrace overlooking the lake, there is also a shelter in case you get caught in bad weather on the trip. When you plan your trip here, keep in mind that the sidewalks are very narrow in places, so you shouldn't come here with a pram or a bike. 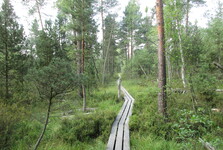 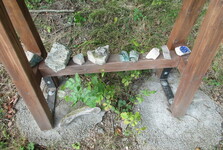 Tourists arriving by car can park in a small car park at the beginning of the nature trail. Even without a car, you can get to the reservation, but you have to expect to take a walk. About 8 kilometers to the beginning of the nature trail from Hrdlořezy nad Lužnicí. From Nepomuk, about half a kilometer from the bus stop in Šalmanovice, follow the yellow tourist sign.