It has never happened to me to see there a soul – a local or a tourist. Fortunately, I haven’t met a ghost, even though there must be dozens of them… Why? 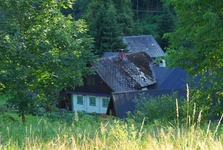 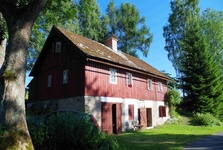 Prior to the WWII, up to six hundred people lived in Kacerov. After the resettlement of Sudeten Germans, their number fell down. Today, thanks to what remains of foundation stones or large trees we can find out where houses used to be. 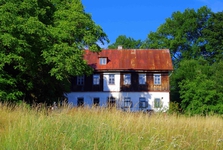 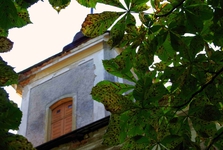 The inhabitants of Kacerov made living by making glass (a glass factory moved in from nearby Kuncina Ves). Later they were engaged in agriculture, timber industry, weaving, rib boxes, and other crafts. The boxes were always on my mind. Who knows what kind of thing it is? I know that some people partially earned money by creating Christmas decoration made of glass in Rokytnice, a village nearby. And also, by producing rib boxes. I found out, such a box is made of a veneer called rib.

Resettlement effort after the WWII was unsuccessful. Kacerov, therefore, became a place of recreation where, for instance, Eva Gerova-Sancova, a well-known actress of the First Republic era, relaxed there. 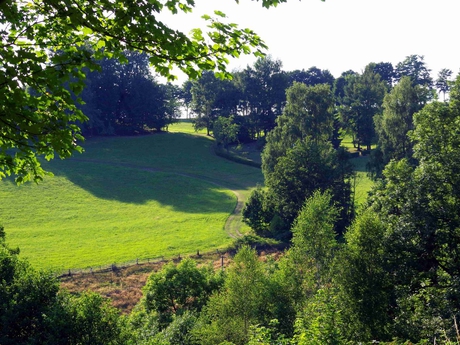 They say se,gravitation field shifts at particular places along a road near Kacerov. The measuring equipment displays strange numbers. Water flows uphill and bicyclists dont have to put any effort to ride uphill … 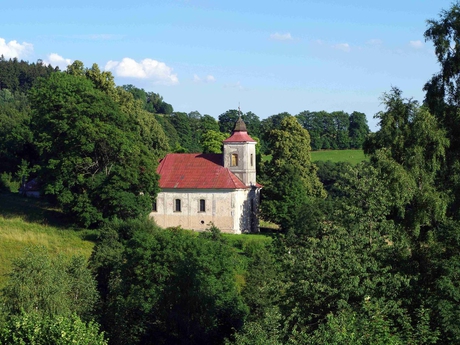 Right upon entering St Catherine church you notice a royal eagle and the year 1798 when the church was finished carved in. It was built here upon former renaissance chapel that had burned down four years earlier. Because both structures are open, I suppose someone takes tremendous care of the church and St Anna chapel nearby. 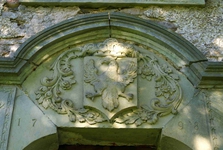 Even though the church’s interior is beautiful, the outside is in a state of decay. Even the graves don’t have names on them. Who knows if children of natives have ever come in here. And what happened to the crucified Jesus without one hand guarding the church?