But first things first. If somebody claims that the name of Krakov village and Krakovec castle were derived from Prince Krok, don’t believe them. Don’t believe them were they historian Kosmas. It has been a long time since the historians came to a conclusion about the name. The Poles captivated by Prince Bretislav I in the 11th century gave the village its name for they were forced to settle deserted land. There are still some names which point to Polish settlers such as Hedecko, Polak lake etc. 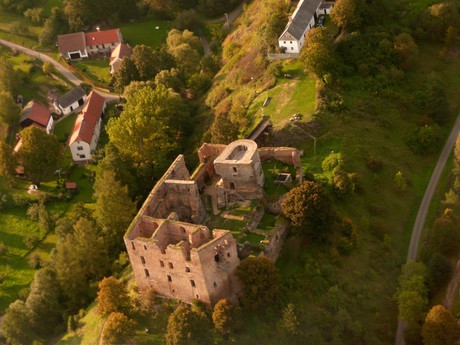 The regions of Krivoklat and Rakovnik were traditional royal game territories in the Middle-Ages. The purpose of Krivoklat castle was to make it a base for hunting the game in local forests. Krakovec’s early history is tied to the Krivoklat’s. Jira z Roztok ordered the construction of Krakovec in 1381. He was joined in this venture by the highest huntsman (summus venator) of Krivoklat who made his carrier by King Wenceslas’ II court. They chose a hillock surrounded by three streams. The fourth side of the rock projection was then shoveled away. Afterwards a bridge was constructed crossing the moat. There was no fortification and defense system at the castle which made it quite atypical. It rather resembled a chateau built for comfortable living. Turbulent history left there massive torso which can be entered along the original entrance way as in the times of Jira. The moat bridge is interesting as well and be sure to take a look at it. It was built in 2005. It supposed to simulate medieval methods of construction, i.e. it was built by using only the then tools and materials. 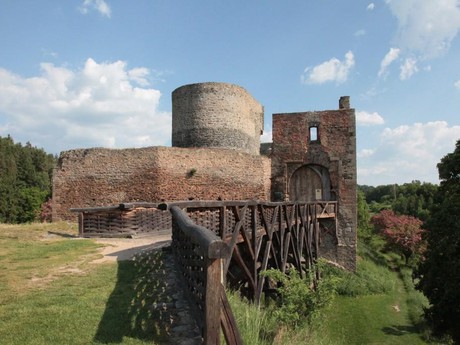 You can borrow a chalk at the cashier’s behind the gate. Write your name on the message board in the dungeon to prove you are no chicken shit. Well “dungeon”… The dungeon appeared only in the 1970s movie „At Ziji Duchove! “ by Oldrich Lipsky. The guide tells you that food was stored in this room. Yet still it have mysterious vibe in it. The Leontynka Brtnikova of Brtnik puppet guards the message board. It comes hardly as a surprise to see the notice saying “Go away, you aliens!” 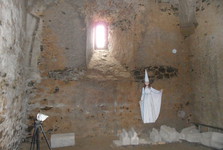 Residue of palaces, cellars, courtyard and the tower is freely accessible. If interested you a guide can give you a lecture on the courtyard situated behind the box office. Krakovec looks still as founded by Jira z Roztok. There were no significant renovations. Even Renaissance gables are long gone. However, you can still see them on historical portrayal of the castle. 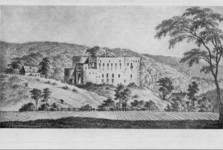 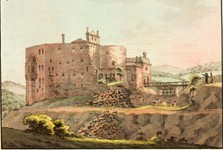 It would be a waste to not to walk around the castle from outside. Otherwise you could miss a massive oriel which was originally a part of the chapel which collapsed in the middle of the 19th century. The John Hus memorial is another place you shouldn’t miss. You can find it on the south hillside. It is a memory to one important historical moment. John Hus lived at the castle in 1414. Jindrich Lefl of Lazany granted him asylum. The John Hus had already been in exile. The church considered him heretic. He was banned to be in Prague and also at Kozi Hradek near Sezimovo Usti. Here he got himself immersed into religious matters and preaching. This ended when he had to get to a general council at Konstanz which sealed his fate. Sculptor Milan Vacha and architect Rostislav Riha designed the larger-than-life memorial of John Hus. 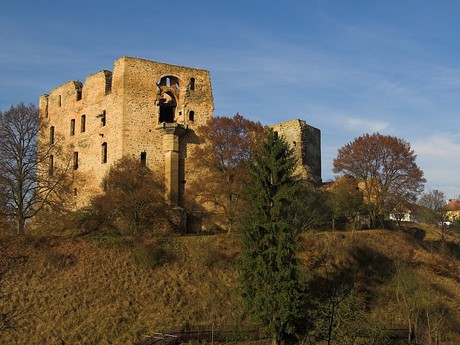 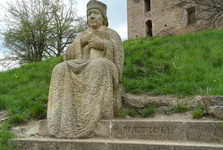 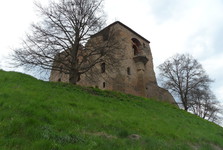 One last thing is a tip for tourists. A red tourist trails runs from Krakovec through the valley of the Javornice to Zvikovec. The trail is 12 kilometers long. It runs through the forest. You meet literally no one there except at a small restaurant at Machuv Mill.