Thanks to its importance the area was included to the NATURA 2000 program. This article presents several interesting and endangered fauna and flora specimen you may find here.
Euphydryas aurinia: critically endangered species that occurs only in the Region of Karlovy Vary
Euphydryas aurinia is a butterfly of the nymphalidae family. It is one of the most endangered butterflies in all of the Czech Republic. Several butterfly populations are only within the Region of Karlovy Vary. It needs suitable localities for its life that are disappearing. One of the last biotopes we can see Euphydryas are meadows near Hranice, in the Luzni potok protected area. Euphydryas is a mid-sized day butterfly (about 5 cm). Its colors are interesting after detailed exploration. The butterfly’s basic color is gold-brown, which has spots of various colors on it. On bottom wings it has a distinct white-yellow stripe of spots and also a stripe of orange spots with black dots. 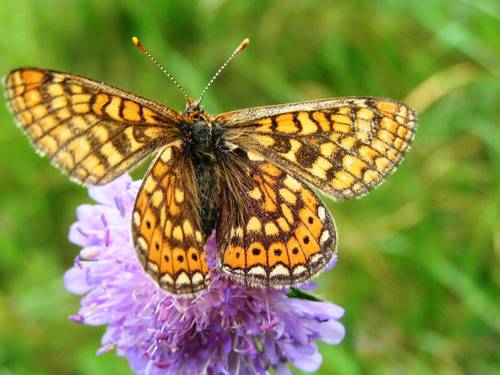 It needs suitable meadows for its life, the most common are wet meadows and marshlands. The basic condition for Euphydryas’s survival is Succisa pratensis . Succisa is a nutrition plant for Euphydryas’s caterpillars because female Euphydryas’s lays eggs on the bottom part of the leaf and after caterpillars hatch they eat those leafs. They don’t eat another types of leafs! Suitable habiats are disappearing due to bad land administration. Important feature is the so-called convenient locality management especially correct mowing of meadows. Euphydryases live in small colonies, their relations and wy of life are very interesting and fascinating. 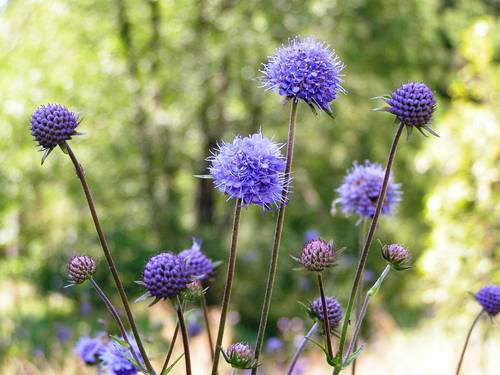 Succisa vulgaris is a nutrition plant for Euphydryas’s caterpillars. It used to be called “chrastavec”. The plant’s height is around 80 centimeters, it has a tuft of leafs near ground, long stem that is ended with a large round blue blossom.
It grows on wet meadows and marshlands. It disappears due to drying of meadows and thus it is becoming a rare species. It has healing effects, it used to be harvested for air passages treatment. 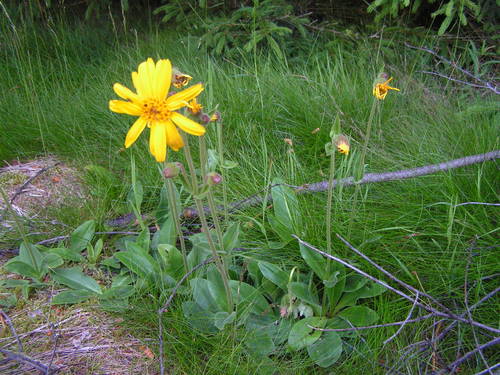 Medical plants have almost disappeared from local lands.
One of them that were common once is Arnica Montana . A bright yellow plant likes sunny meadows, hills, heaths and acerbic soil We can see it easily due to its blossom that has typical color and is “unkempt”. The plant has medical effects. Arnica can heal rheumatism, inflammations, ski diseases and cardiovascular problems. Its blossom and rootstock used to be harvested. Due to blossom harvest the plant couldn’t spread naturally, by seeds, so its numbers were falling. Today we have this plant on the endangered flora species list. Today we can see Arnica in the Hranico region rarely.

Another plant boasting with healing effects is Menyanthes trifoliata . We can recognize Menyanthes by its white inflorescence and leafs from which the name of the plant was derived. It can be found at pools, ponds, marshlands and on permanently wet meadows. It is a medical herb people have been collecting from the time immemorial. It has a positive effect on digestive system (stomach troubles, nausea, absence of appetite). Today Menyanthes is on the endangered species list so law forbids its harvest. There is a lot of these plants in the Hranicko region. 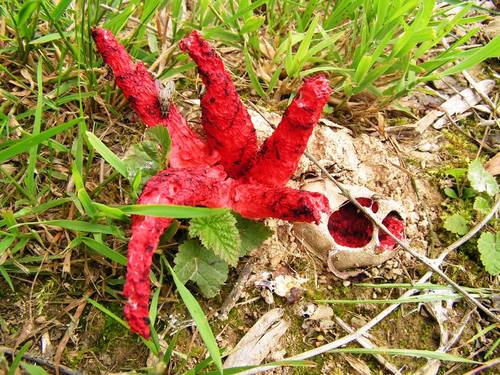 Tropical species by their origin in the Hranicko region.
Average annual temperature in the Hranicko region is around 6 degrees Celsius. Local harsh climate, however, isn’t harmful for some originally tropical plants. An interesting mushroom grows for several years in local forests and gardens. It attracts one attention instantly as it looks as a red octopus. The name of the mushroom is Clathrus archeri and it came to Europe from Australia probably at the beginning of the 20th century. It grows from a small egg. It needs rotten wood from which it gets nutrition. You can see it in summer and even in autumn. It isn’t eatable, it smells and it’s quite rare in the Ašsko region.
Another tropical species that inhabited our region is Argiope bruennichi . Similarly as Menyanthes, it is easily visible thanks to its yellow-black color. This spider got to our land from south parts of Europe and it spread across the Czech Republic. It likes wet meadows where it makes its webs characteristically bended strips. In sub mountain areas it is more rare, it is not poisonous. 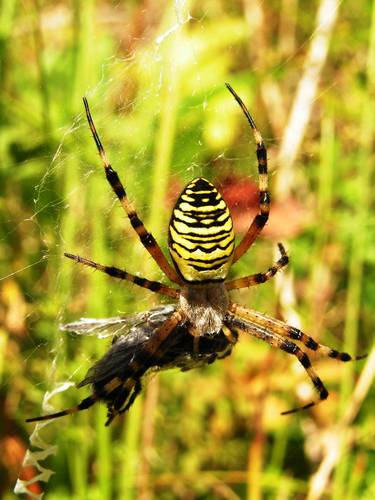 Should you go on a trip to the Luzni potok area, move only on marked routes and when in nature behave carefully as there are fragile biotopes sensitive to any even minor change or disruption of their environment. The „On the Way to the Three-states “ nature trail will guide you through local nature.