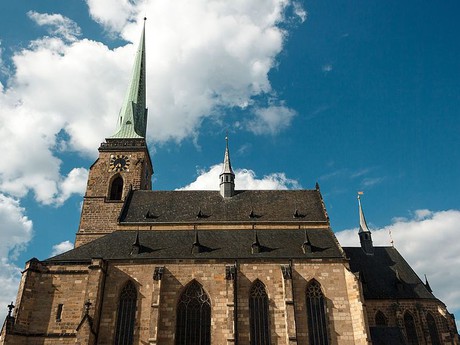 It is very unusual for a parish church to be built in the middle of the square. This place  was always considered to be unclean. Markets took place here all the time, there was  the pillory and executions took place here as well. In 1993, the diocese of Pilsen was founded here by John Paul II which upranked the church to a cathedral. St Bartholomew cathedral and its Madonna were listed as national culture sights in 1995. Large fires broke out throughout the year 1507 in Pilsen. The entire city fell into ashes including the church. It was fully repaired only in 1528. 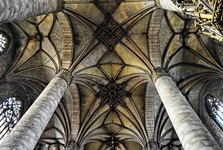 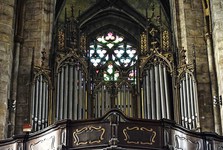 The cathedral has 58 meters in lenght with 30 meters in width, vaults are up to 25 meters high. The belffry is 103 meters high which makes it the highest belfry in the

I noted a 1,3-meter tall Virgin Mary with Baby Jesus inside a niche at the main altar. Created in the other half of the 14th century (the era of beautiful Madonnas), the statue is one of the most precious pieces of Gothic in the Czech Republic. The highlight of the church is the Sternberg chapel which is accessible from the main aisle at the right section of the church. Also, there is the Bohemian altar. Made by the House of Sterberg as the house tomb, the Sternberg chapel is connected to the southern side of the presbytery. However, the family lost interest in the chapel. Since then it has been the place of ceremony for people on the bottom part of the social ladder. 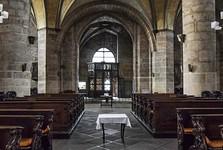 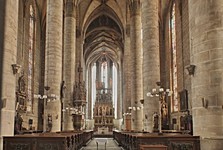 I was interested by amazing stained glass windows including a window depicting Golgot by Pilsen painter Joseph Mandl. There are 4 pointy windows with interesting tracery in side aisles. St Mary Magdalene by Tintoretto is another interesting work on the pillar below the organ loft. You may enjoy the monumental organ on the organ loft made by Emanuel Peter in 1894.

Behind the entrance to the church I got this very strange feeling. However, this is typical for these amazing buildings. The cathedral is quiet, peaceful, and has beauty of its own worth seeing. Last but not least, we have to mention the northern tower, with the beautiful vista over entire of Pilsen and its surroundings. We will get there next Thursday.