How Long Do We Live Together?

According to historians, the history of Jews in Moravia can be traced back to the year 906, and in Prague to 965. The status of Jews govern the privileges of Premysl Otakar II in the middle of the 13th century and today's Prague Old Jewish Cemetery between Siroka and U Stareho Hrbitova streets was founded as early as 15th century. has been there for at least since the 15th century, with at least two precursors. Although the coexistence of Jews and Christians has never been peaceful, the 17th century Prague community has been the most numerous of all disasters to those in Europe until the unfortunate year of 1939.

At the entrance to the Old Jewish Cemetery there is a neo-Romanesque ceremony hall from 1908. Inside is a collection of fragments of the oldest tombstones from the 14th century and an extremely interesting exhibition of 15 pictures from the 18th century which depict the customs and rituals associated with death and burial. These document the activity of the funeral brotherhood, founded in 1564 by Rabbi Eliezer Ashkenazi. 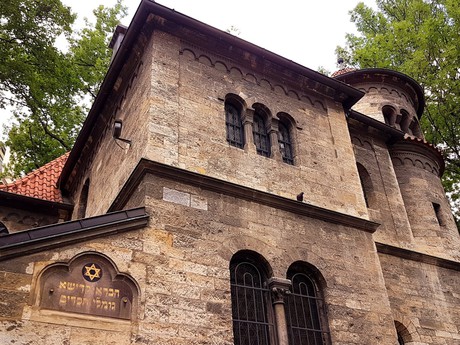 Old Jewish Cemetery, the Most Mysterious Place in Prague

But now to the cemetery itself! The tombstones are placed one right next to another. This is because there was no place left for cemetery to expand for its 350 years of existence, so the dead had to be piled one on another. To save space, they were buried mostly without coffins in a minimum of 56 cm high clay. The older tombstones were always lifted slightly up. Families are not buried together for the dead were always buried where was some room. Old tombs are not allowed to be removed, so we will never know if there are 3, 4, or perhaps even 12 burial strata as it has been long claimed. There are a total of 12,000 tombstones, but there have been many more funerals. 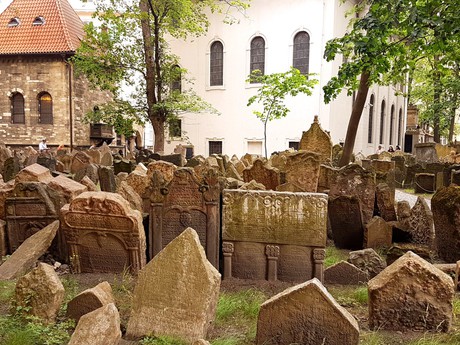 The tombstones are described in Hebrew, the oldest are either plain rectangles or ending with a shield or arc. The oldest to date, the oldest one, bears the date of 1439 and belongs to the learned poet Avigdor Kara, son of Isaac. The Renaissance tombstones were more decorated, and tumbles began to appear from 1600 onwards. But the coffin is not in them, but below them in the ground. In addition, newer tombstones carry symbolic images that indicate the belonging of the dead to a particular family or its earthly task or social status. Watch carefully, see a jug, a lion, a wolf, a grape wine, or a pine cone...

You will also notice the tombstones set in the inner wall, coming from the older cemetery in Vladislavska Street. It was abolished in 1489. 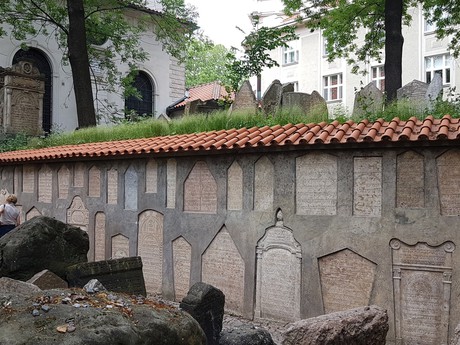 The footsteps of all visitors lead to a place against the wall opposite the main entrance, where the tomb of the learned Rabbi Jehua Liwa ben Becalel, probably the most famous Jewish personality buried here, is standing. You will surely know him under the names of Rabbi Löw or Maharal. During his life he was a respected religious scholar and pedagogue, an author of many philosophical writings.

In the Czech Republic there is a well-known and popular legend, according to which he is the creator of Golem, a clay giant who was revived by the bull and fulfilled the orders of him who revived it. Golem is still living on the grounds of the Old New Synagogue, and although no one has ever discovered it, he enjoys believing in his existence. But it's not the only reputation that binds Maharal. According to another, his tumble was moved by himself in 1655 to make place for his grandson Shemeul. 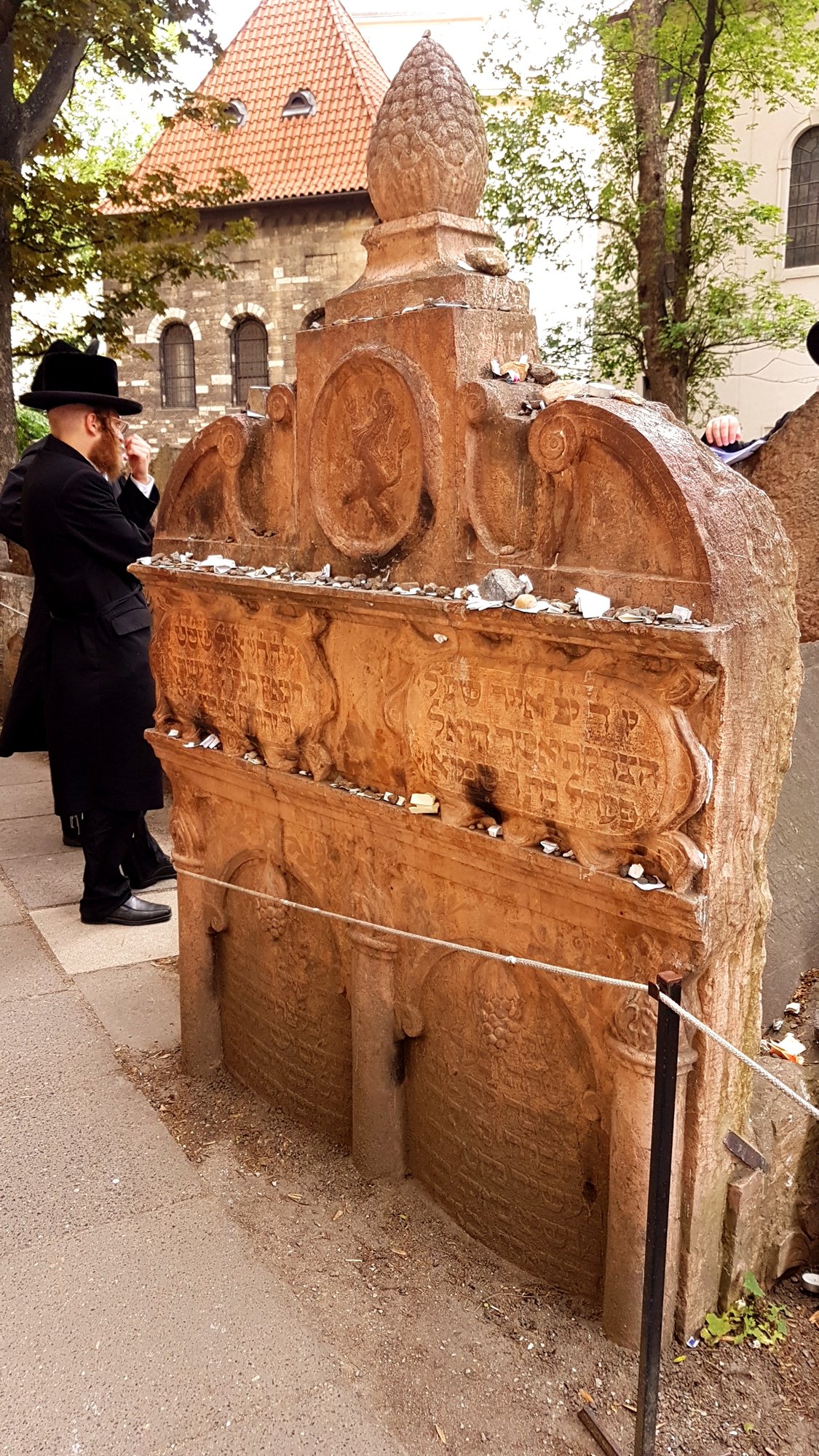 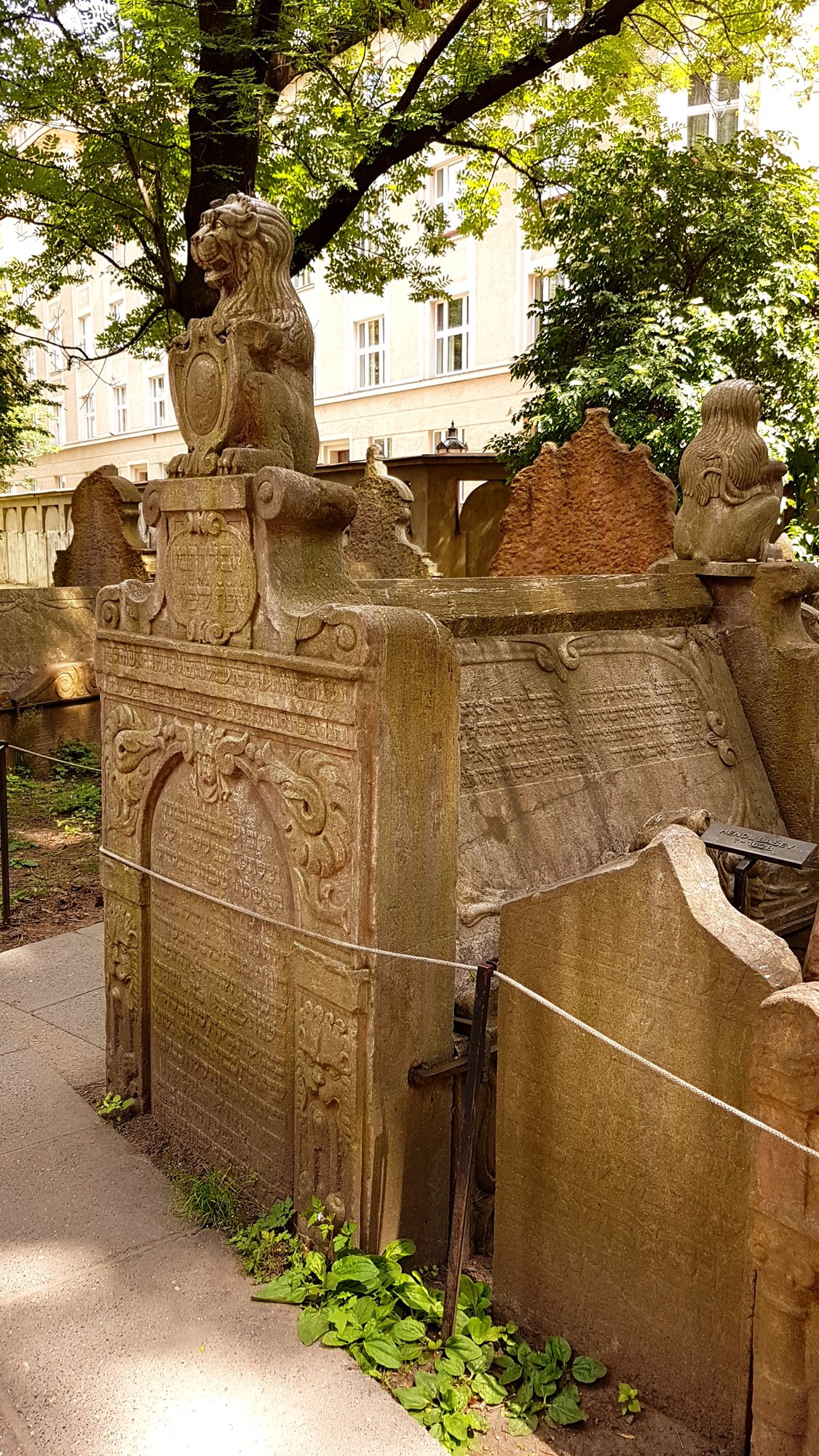 They say that it is within the power of passed Jewish scholars fulfill human wishes. You can try: write your wish on a small piece of paper, place it on the tombstone and put a small stone on it. It is good to support your efforts by praying and giving up the respect to the dead.

The marble tomb with two lions belongs to Hendel Bashevi (died 1628), who was called the "mother of the poor". Her husband was the primate of the Jewish community and the first Jew in Bohemia promoted to the noble state.

Another tomb belongs to Mordechai Maisel (died 1601), the builder of the Maisel Synagogue, was the primate of the Jewish Town in Prague.

On the hillside was a former Jewish hospital, which burned in a fire in 1689. From the beginning of the 18th century, there were buried children who died shortly after their birth. Also there are buried transferred remains from a part of the cemetery, which was canceled due to the construction of the building of the Museum of Applied Arts. 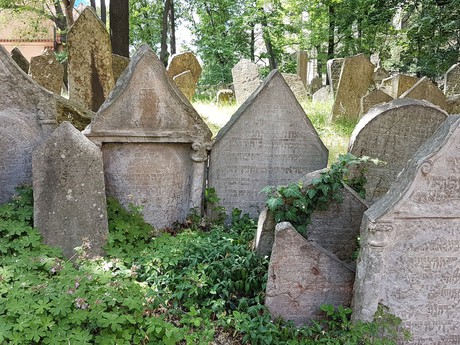 Although the cemetery is a tourist attraction today rather than a quiet place of rest, its still enchanting. If we may give you some advice, make your visit during the morning hours before other tourists come here. Silence and loneliness belong to such walks.

Next time we will explore Prague Synagogue.