In honor of Charles IV the castle was named Karlskrone. However, people did not find it very popular. The castle was renamed after his death. The new name originates from the hill on which it was built. In the past, the castle administrators had the duty to monitor and secure the trade routes between Nuremberg and Prague and to manage the royal property in the area, unfortunately the castle burnt down in the 16th century. In the following years the castle was gradually owned by various aristocratic families - Sternberg (the castle burned again), the Kokorovic from Kokorov, Cernins from Chudenice and Valdstejns. In the present time, the castle in care of Stary Plzenec. 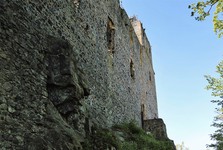 The ruins can be reached by car without difficulty, you will see it from far away, so you do not have to worry about finding it. Under Radyne, there is a large parking lot, visitor center and restaurant. But you need to go upstairs. A smaller exit awaits you on the nicely bent stairs, but the destination is worth it. There are 114 stairs up the castle tower, and you will also find a spyglass there. Looking out of Radyne, you watch landmarks in the surroundings. Many are visible in good weather. For example, Primda Castle, Kozel Chateau, Stary Plzenec with St Peter and Paul's rotunda and many others. You will certainly list ten other interesting places in the area to visit. 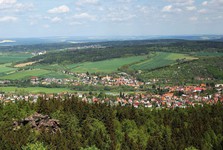 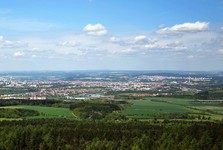 In the tower there is a historical exposition, but also a fairytale exposition where you can learn more about the legends told about the castle.

The one about evil Radoush who, when he was born, had donkey ears, boar teeth and goat's beard. He lived in the woods and one day he managed to steal a magical book from an old man who was sleeping. After reading it, he summoned the elves who immediately fulfilled all of his wishes. He wanted to be a powerful man, so he commenced the construction of Castle Radyne which was built on a rock in the woods. He also wanted a beautiful woman to give him a baby. It was fulfilled. The baby also had donkey ears, boar teeth and goat's beard. Radosh became angry and killed the woman and the baby. This wish has been repeated several times, and it has always been the same. Many beautiful virgins died. One day the lightning struck the tower and the whole castle crashed and buried Radoush. Thus, he was punished for his bad behavior and evil deeds. It is said that he is watching his property ever since. 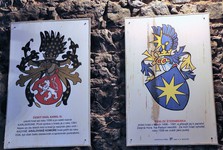 If the view from the tower inspires you to take a walk, I recommend a nature trail that leads around Old Town Pilsen where you may find the rotunda of St Peter and Paul. The trail was built to commemorate the 1000th anniversary of the foundation of Old Pilsen.