In Stechovice, we passed a beautiful firefighter station. Then we crossed a bridge. On the other end of the bridge, we spotted the first information panel about the sight standing on the nearest hilltop. This is Art Noveu church of St John of Nepomuk. The church was built in the years 1911–1915. The Svatojanske proud (Saint John's Currents) were named after the famous martyr. Then, we discovered the first green marking which made us realize that we are on the right trail. A lady passing by recommended us the red trail instead. The vistas are supposed to be better there. 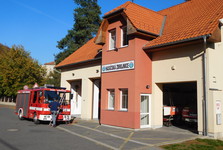 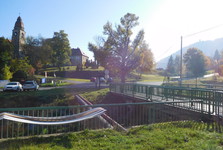 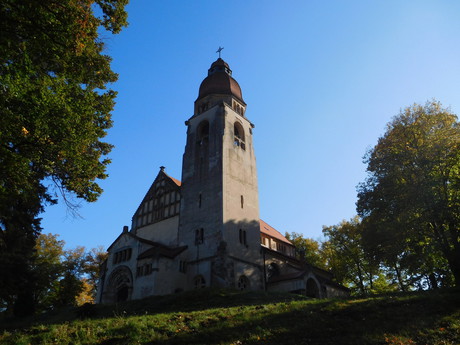 At first, we climbed steeply but were rewarded with amazing open vista over Stechovice water dam and Stechovice power plant. An information there provided us with more info on both sights. The dam was created by flooding the area called Svatojanske proudy in the years 1937–1945. This was made to regulate water flowing out of the  Vltava. Behind the dam, this amazing valley offered us many amazing vistas over the land veiled in warm summer light and colorful tree leaves. From time to time, we spotted paddlers, or tourists on motor boats. We walked through a small trailer park. Another information board let us known, that the trail we were walking on, was the very first marked nature trail in Bohemia made by the Czech Tourist Club. 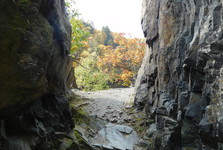 The hiker settlement of Ztracenka (iby its full name it goes Ztracena Nadeje – Lost Hope) was yet another point of interest. Sausages were being cooked and various renovations of local wooden cabins were under way. Yet we went on to Stechovice-Trebenice village. However, we were under time pressure now The terrain became less covered by trees and more by rocks. After lookout points followed tunnels in rocks. Occassionally we spotted lizards sunbathing. 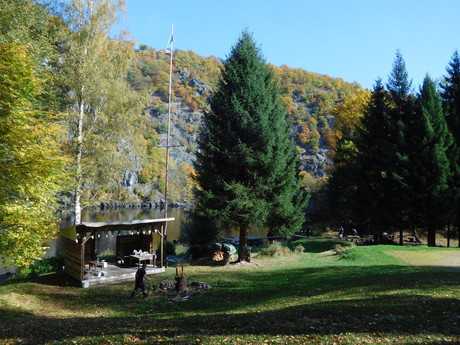 As the end of the trail was getting nearer, we descended from rocks and spotted increasing presence of cottage settlement. There was an isolated in one such settlement. On it, there were various souvenirs including postcards, fridge magnets, bracelets, or tourist stamps. Among these was a small bowl full of money. To see such a system working without a vendor and tourist paying the right prices was very pleasant. Furhter on, the trail widens and can accommodate cars. The we reached Slapy dam with a long staircase as a bonus going up to Trebenice. As a reward for our effort the trail got us to local restaurant. There we were happy to drink their beer and eat some late lunch. Thus, we ended our trip. 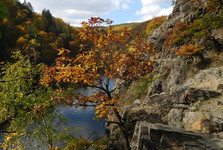 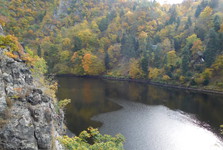 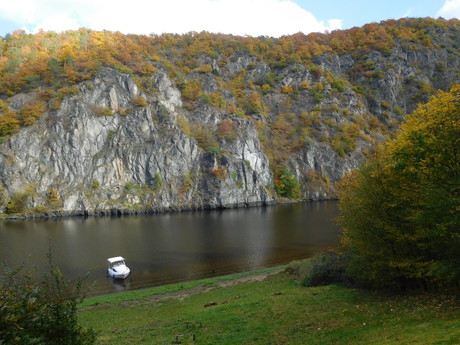 To conclude, you should know that the trail follows steep hillside. It is not suitable for bikers and people with muscular system problems. The bus from Prague to Stechovice rides every half-an-hour on weekends. There is a 2-hour interval from Trebenice to Prague. We recommend you to carefully schedule your trip.