The thing the town is proud of is a geological exhibition Pod Klokoty. You can find it by the Luznice, beneath a district of Tabor bearing the same name.

The rocks are part of nature in our neighborhood. We think that the stone is dumb, but 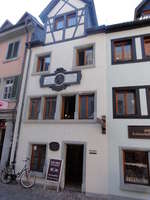 it can tell us very much. This exhibition will introduce you to the natural exhibits of rocks of the southwestern region. Each mineral has a so-called birth certificate, which specifies the type of rock and its incidence. The dominant feature of the complex is undoubtedly a gazebo that looks like a prehistoric lizard. You can get some promotional materials, tourist post stamps and commemorative stamps in an infocenter on the square. The exhibition is open throughout the year.

Very popular rarity is a underground complex of corridors and chambers that were being built since the 15th century by enlargement of cellars, the

so-called “lochy“ beneath historical area of Tabor on Zizkovo square. The area of the town’s underground is really impressive, some of mile-long corridors lead to 16 m below ground level. The only public guided tour takes place in a tunnel “Lochy”, which is only 500 meters long. Formerly, it served as a safe shelter for the town residents from the enemy in case of threat to the city or to the original purpose - the preservation of food. The entrance to the underground corridors is located on the ground floor of the Hussite Museum.

Also, you can see a statue of very famous Hussite general, Jan Zizka of Trocnov. He had an important role in building the town as well as he was a driving force of its fame. You can see also a memorial Jan Hus, an important theologian, preacher and medieval reformer. The memorial is located on Hus square.